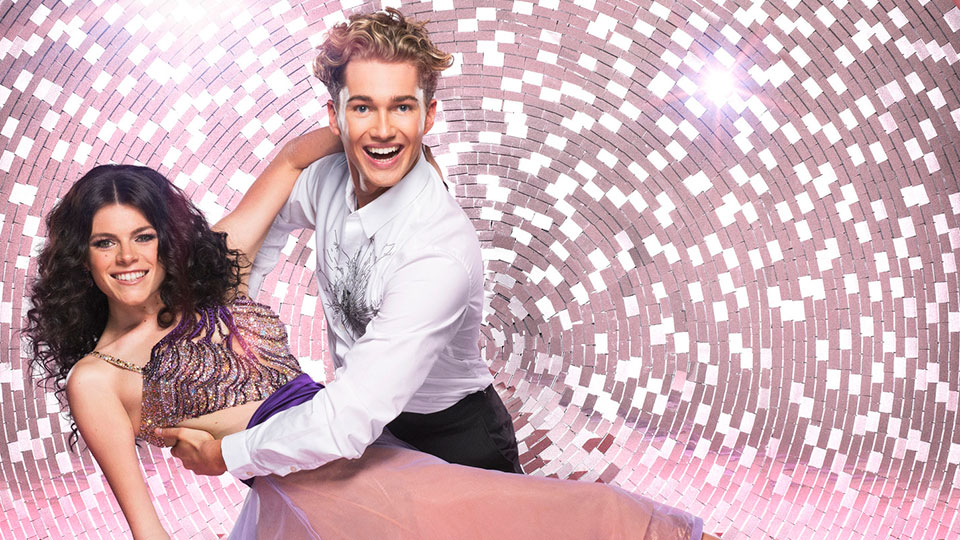 The weekend saw Kate Silverton leave the competition after losing the dance-off to Graeme Swann. With only 7 couples left, the pressure is getting intense and the tiredness is starting to show.

Tonight all of the couples danced again in the hope of securing their place in the competition by winning over the judges and the public. They also took part in Strictly’s first ever Lindy Hop-athon. Who soared and who crashed and burned?

Despite getting his best score of the series last week, Graeme found himself in his third dance-off in four weeks. Could he and Oti bounce back with their Quickstep to The Andrew Sisters’ Sing Sing Sing? In training Graeme spoke about struggling with remembering the amount of content in the dance as well as the speed, but also how much he wanted to win the competition. He and Oti also practiced some of their routine on a yacht to get in the spirit of their nautical routine.

The dance: Graeme certainly had plenty of spring in his step and great pace around the dancefloor, and was incredibly light on his feet throughout. He and Oti were nicely synchronised in the Charleston and pendulum sections and he had excellent energy and control, as well as a real sense of fun. There was a bit of gapping in hold and he did have a wobble in the middle, but overall I felt this routine really suited him and it was very enjoyable to watch.

The comments: Shirley said Graeme’s entrance was great and praised his recovery, but said his frame got twisted and affected his footwork. Bruno thought it wasn’t always plain sailing but Graeme managed to get safely into port. Craig compared it to the Scarecrow from The Wizard of Oz and that it wasn’t in sync, whilst Darcey wanted Graeme to be more consistent.

Last week Ashley and Pasha became the first couple this series to score a perfect 40 – could they repeat that with their Samba to Hot Hot Hot by Arrow? In training Pasha took Ashley to a greenhouse as part of their dance’s tropical vibe, whilst Ashley found the technical aspects of the dance challenging but also felt the pressure of her perfect score.

The dance: Ashley definitely got into the party spirit, from the flirty and cheeky opening with the feather fans, and kept the energy up throughout. She definitely captured the style of the dance well and had great synchronisation, as well as pulling off a lot of fast-paced choreography. It was a lively, slick routine and definitely entertaining, but I felt it lacked the characteristic Samba bounce and consequently didn’t quite hit the level of her previous performances for me.

The comments: Bruno praised Ashley’s hip isolation and said it was ‘criminally good’. Craig thought Ashley hit it a bit too hard and the dance became a bit staccato, but she made up for it in performance. Darcey said Ashley’s Samba roll was divine but wanted more softness. Shirley agreed – Ashley’s gyrations were second to none but her knees needed to be softer.

After last week’s fiery (in more ways than one) Paso Doble, Faye and Giovanni had a complete change of pace tonight with their Waltz to See The Day by Dee C. Lee. The dance was changed from an American Smooth after Giovanni suffered an injury in training. Meanwhile, Faye spoke about struggling with the pressure and the technicality of the dance, whilst her parents came to visit her in the studio.

The dance: This was a more dramatic Waltz than we’ve come to expect on Strictly, with Faye hitting some lovely lines and bringing a real intensity to her performance. She had gorgeous rise and fall and a nice top line throughout, as well as great control in the spins. It took her a little while to get to the heel leads, but when she did they were great and I would have liked more of them. Overall this was another strong routine and should see her near the top of the leaderboard yet again.

The comments: Craig called it graceful and elegant and singling out Faye’s ‘gorgeous’ pivots. Darcey said it all came together and Faye’s head movement was ‘divine’. Shirley thought there were skills Faye hadn’t shown yet, praising her brush step and oversway, and said it was ‘exquisite’. Bruno called it ‘effortlessly classic’ and that Faye’s poise was almost regal.

This week it was Joe’s turn to take on the Couple’s Choice, as he and Dianne performed a Street/Commercial routine to House Of Pain’s Jump Around. In training Joe talked to Dianne about how he got into vlogging and the opportunities it’s brought him, as well as how much he’s enjoyed being on Strictly Come Dancing. He also got a message of support from sister Zoe (AKA Zoella).

The dance: Joe gave us a polished routine that really showed off his personality, with plenty of homages to classic 90s dance moves. He and Dianne had great co-ordination, he pulled off the tricks well and there was a great sense of playfulness about his performance. It’s clear he’s been working hard in training, but I liked that he wasn’t afraid to show off his silly side too and brought a strange kind of charm to the routine. He’s going from strength to strength every week and I think he’s definitely a contender to win the whole thing.

The comments: Darcey said Joe took some seriously big risks and praised his agility in the floor work, but wanted him to get down lower in some moves. Shirley loved the synchronisation and said the routine was ‘difficult and spot-on’. Bruno liked that Joe was always on the moment, but Craig thought it looked a bit too concentrated and it was out of sync too often.

Charles made a triumphant return to form with his Samba in Blackpool, scoring his first 10s. This week he got to show off a different side to himself with his and Karen’s Tango to Big Country’s version of Eleanor Rigby. In training Charles spoke about how thrilled he was with last week’s score, but found the switch to the Tango frustrating and was determined to deliver the best possible routine on the night.

The dance: I’m not sure what Charles was worried about. He had some great sharp, staccato moves, fantastic control and an excellent Tango face to boot. It did get a little skippy in places, he was up on his toes too much and there was a bit of gapping in hold, but this was a Tango with plenty of drama and attack and some excellent flourishes too. I also loved the twist to the ending! Perhaps not as strong as last week but definitely not a bad performance by any means.

The comments: Shirley said there were some very good elements but it wasn’t continuous all the way through and wanted Charles to concentrate on the music. Bruno thought it was attention-grabbing and Charles was in leading man mode, delivering the character very well, but said it needed more glide. Craig felt it lacked drive across the floor and Charles’ feet were turned in, but it was exciting to watch. Darcey, however, loved the drama and clipped transitions.

Lauren’s growing confidence took a hit last week when she and AJ finished bottom of the leaderboard. However, tonight they had a chance to turn that around with their Salsa to Familiar by Liam Payne and J Balvin. In training Lauren said she felt she’d let AJ down and wanting to bring more personality to the dancefloor, whilst AJ took her to a pool hall which was the setting for this week’s routine.

The dance: What a revelation from Lauren! She showed off her sassy, sultry side in this routine, with excellent hip action and some great armography. Her lifts have also improved a lot and looked much smoother than last time, whilst the smile on her face throughout was infectious. It wasn’t quite as high-energy as some of the other Salsas we’ve seen this series and she lost her balance a little on one of the drops, but overall it was a cheeky routine and definitely back to her best.

The comments: Darcey liked Lauren’s clean dismounts in the lifts but wanted the dance to be cleaner in the turn section. Shirley thought it wasn’t Lauren’s best routine as her feet didn’t have enough grounding, but praised her armwork. Bruno felt Lauren coped well with the demanding choreography but wanted her to give it some welly (as Len would have said) and sell it a bit more. Craig called it ‘lacklustre’ and said Lauren’s foot placement was haphazard and pigeon-toed.

After her high-energy Salsa in Blackpool last week, tonight Stacey showed off her dramatic side as she and Kevin performed a Paso Doble to Malaguena by Brian Setzer. In training Stacey spoke about how much fun she’s having on Strictly and wanting to enjoy every minute of her time on the show.

The dance: This was a fast and furious Paso from Stacey, with some incredible speed around the floor and in the spins. She had excellent skirt work and a lovely sharpness about her movements, as well as beautiful fluid arms and gorgeous shaping out of hold, and handled the dramatic moments well. I loved the feistiness and attitude she brought to the routine as well. An absolutely stunning end to the show and one of her best performances so far in my view – surely she’s going to get her first 10s tonight!

The comments: Craig said Kevin made Stacey look absolutely amazing. Darcey thought it was fierce and Stacey ate up the dancefloor, praising her determination and calling it ‘dramatic, powerful, brilliant’. Shirley said Stacey looked like a star and loved her stillness even in the aggressive moments of the music. Bruno thought Stacey ‘killed every bull that came into the arena’.

The seven couples also competed against each other in a Lindy Hop-athon to Basement Jaxx’s Do Your Thing. Lindy Hop is a fusion of jazz, tap and Charleston, with plenty of lifts and tricks on show from the couples on the dancefloor. They all put in great, high-energy performances and the judges certainly had a difficult job to judge them!

The scoreboard for the Lindy Hop-athon was:

The Lindy Hop-athon scores were then added to the couples’ scores from earlier in the evening.

The final leaderboard for the evening was:

Strictly Come Dancing 2018 continues tomorrow at 7.20pm on BBC One. Take a look at all the couples in rehearsal earlier today in our gallery below…