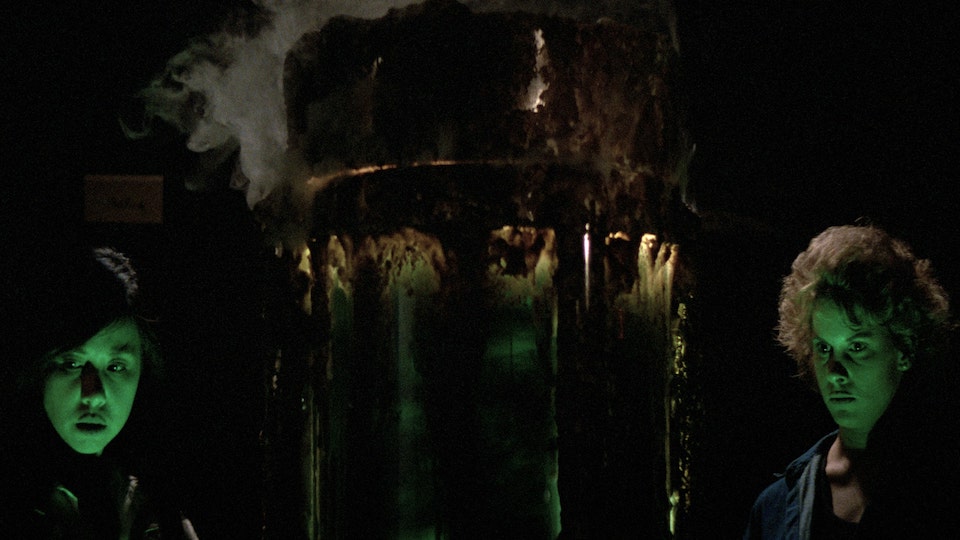 Having enjoyed some big early success in his career with the likes of Halloween, The Fog, and Escape From New York, John Carpenter was lured into the big budget world of Hollywood. His record with the studios was hit-and-miss to say the least. After the box office failure of Big Trouble in Little China, Carpenter decided he’d had enough of the mainstream, and signed a four-picture contract with Alive Films. It was a simple enough deal – they would give him $3 million to make a film, and he would have complete creative control. The first film to emerge from this deal was the 1987 horror, Prince of Darkness.

The second instalment in Carpenter’s so-called Apocalypse Trilogy – sandwiched between The Thing and the underrated masterpiece that is In The Mouth of Madness – Prince of Darkness is an intelligent and bizarre theological horror film. In the basement of a seemingly unassuming church, a strange artefact has been found. An ancient flask, filled with a swirling green liquid. What evil has been kept hidden here, and more worryingly, what might be unleashed now it has been discovered?

Donald Pleasence is the Priest who finds the ancient artefact, and believes he knows what it is, and what they have awoken. He reaches out to Professor Howard Birack (Victor Wong), a theoretical physicist, and invites him and his students to investigate the mysterious object. And so, in this abandoned church, in a run down neighbourhood of Los Angeles, a group of scientists and a priest attempt to unlock the answers.

What we get as a result is one of Carpenter’s most intriguing films. Prince of Darkness is a very strange beast, and incredibly bleak, even by Carpenter’s standards. The sense of creeping dread exists from the first scene to the last. In between we get this strange exploration of good versus evil and God and Satan, but through the contrasting prisms of Catholicism and theoretical physics. The film ends up being part debate, part surreal horror, and part siege movie. A bit reminiscent of Assault on Precinct 13, but with possessed murderous vagrants, and the entire world coming under threat from the re-birth of the Anti-God.

Rest assured however, it isn’t all cerebral mumbo-jumbo. When it comes time to deliver the horror, Carpenter doesn’t hold back. As the green liquid begins to infect the scientists, and they all start having the same shared visions of an apocalyptic future, the film develops into something really nasty, and grotesque, and deeply disturbing.

In the second half of the film in particular, there’s an almost Romero feel to proceedings, as the single location, imaginative practical effects, and committed performances from the cast all swirl together. One of the scientists makes a run for it only to be brutally murdered by the possessed hordes outside the church. His corpse is then re-animated by a swarm of gross insects, so he can deliver a message from the dark lord. It’s very grim, and really only a taste of what’s to come in the third act.

Undoubtedly the film suffers from being occasionally incomprehensible – a problem not uncommon when directors are given full creative control of their work. It is also hampered by the budget, meaning that the truly epic scale of the story is somewhat undermined by the intimacy of the plot. But Carpenter makes it work, like he has always done, by elevating the material with dazzling filmmaking technique. Surreal and atmospheric, Prince of Darkness builds to a sensational climax, featuring one of the most startling images from Carpenter’s entire career.

On disc one of this new edition there is a feature length commentary with John Carpenter and regular Carpenter actor Peter Jason. Like all the other recent 4K special editions, the second disc is packed with tons of additional content. The main event is Malevolent: Unearthing John Carpenter’s Prince of Darkness. This brand new documentary gives us a complete retrospective on the film, with fascinating details on the deals that got the film made, and insightful interviews with cast, crew, and critics.

There’s a short interview with John Carpenter, which originally appeared on the 2013 US Blu-ray. As always, Carpenter gives good interview. Similar to the 4K special edition of the The Fog, there is an episode of Horror’s Hallowed Grounds, with host Sean Clark taking us on a tour of the real locations used in the film. The disc also comes with a further interview with Carpenter taken from the 2003 French DVD release.

Also from the same release is a very short featurette of Carpenter giving a scene analysis. It’s very lo-fi, with the director merely sat beside a television talking us through the dramatic final scene. The final delve into the archives yields a selection of original promo materials, including the theatrical trailer, a photo gallery, and some radio spots.

Unlike the other recent 4K releases, Prince of Darkness is the only one not to get the full four-disc UHD special edition treatment, so that’s your lot unfortunately. However, it’s a still a great selection of bonus features to accompany one of Carpenter’s most fascinating and underrated films.