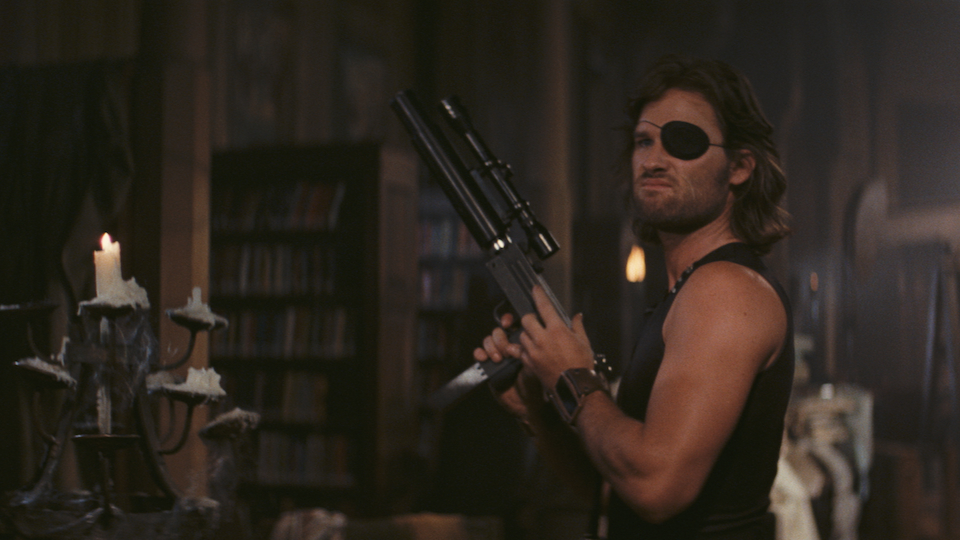 Has there ever been a better high concept premise for a movie than Escape From New York? The greatest city in the world has been transformed into a maximum-security penitentiary, and the President of the United States is being held hostage inside. The simplicity of it is matched only by its genius, and co-writer and director John Carpenter took this premise and made the most spectacularly entertaining film of his career. Given a pristine 4K makeover by Studiocanal, there has never been a better time to revisit the Big Apple gone bad.

Released in 1981, the film imagines the future America of 1997. The nation has become a fascist police state, and the government has built a massive wall around Manhattan. It would be tempting to think that this must be Trump’s favourite film, but there’s really no way that the massive tango-faced turd was ever cool enough to watch a film this subversive.

When Air Force One is hijacked and deliberately crashed into downtown Manhattan, the President (Donald Pleasence) uses the escape pod to survive. Unluckily for him, he is found and taken hostage by the top dog of the prison – The Duke of New York (a terrific Isaac Hayes). When former war hero turned legendary criminal ‘Snake’ Plissken (Kurt Russell) arrives to begin his life sentence, he is given the chance to earn a full pardon. All he has to do is go inside the prison and rescue the President. But he’s only got 24-hours, as they’ve placed pin-sized charges in his neck. If the time runs out, and he hasn’t accomplished his mission, then it’s kaboom.

The film’s financiers were hoping for someone like Clint Eastwood or Charles Bronson to take on the lead role of Snake Plissken. They basically wanted a known quantity for playing a grizzled old ass-kicker. But having worked recently with him on the Elvis TV movie, John Carpenter pushed for Kurt Russell to be cast. Still best known at the time for the films he made with Disney, this was a radical departure for Russell, but he repaid Carpenter’s faith – and then some – by creating one of the most iconic, ultimate badass movie characters of all time. The eye-patch, the tattoo, the cool dialogue, the don’t give a fuck attitude. It’s an outstanding performance, and it needed to be, because Escape From New York has one of the great ensemble casts.

As well as Russell, Hayes, and Pleasence, you’ve got Lee Van Cleef as the appropriately named Hauk, the dastardly prison commissioner. Ernest Borgnine plays a New York cabbie, who’s just carried on driving around the city as it changed from a bustling metropolis to a crime-ridden hell-hole, and then eventually a prison. Legendary character actor Harry Dean Stanton turns up as Brain, a former accomplice of Snake, who is now an advisor to The Duke. A couple of Carpenter regulars, Adrienne Barbeau and Tom Atkins round out the cast.

If Escape From New York was made today it would be a $150m special effects extravaganza. Carpenter executed this sci-fi western masterpiece for a mere $6m, making inspired use of sets, miniature models, matte paintings, and locations in St. Louis and Los Angeles to double for the dystopian New York. It doesn’t look remotely realistic, but it still looks fantastic. And that isn’t an opinion borne of tedious 80s nostalgia, of which there is a lot these days. It’s just that Escape From New York is a desperate and nightmarish vision of the future, and the grungy underworld aesthetic of Joe Alves’ production design works perfectly.

But that’s enough about the film, we’ve all seen it countless times, and we all know it’s an absolute belter. Let’s get stuck into this new 4K release. First thing you need to know, is that it looks incredible. Perhaps a little too good for some of the old special effects. Escape From New York has had a lot of DVD and Blu-ray releases over the years, but it has never looked better than it does here.

Disc One of this edition comes with three fantastic feature length audio commentaries. The first is with director John Carpenter and star Kurt Russell. The next is with producer Debra Hill and production designer Joe Alves. And the final is with actress Adrienne Barbeau and director of photography Dean Cundey.

Disc Two kicks off with a brand new retrospective documentary – Purgatory: Entering John Carpenter’s Escape from New York. Featuring contributions from critics, film historians, and all the main behind-the-scenes players from the film, this terrific documentary gives you the whole story of how this film was made. Essential viewing.

Next up is Snake Plissken: Man of Honour, a 15-minute featurette from the 2005 special edition DVD, which is essentially a brief making-of documentary. There’s also a deleted alternative opening scene, which shows Snake’s crime and then arrest. As it hasn’t been re-mastered it’s a great showcase for how incredible this 4K restoration actually is. However, the scene adds nothing to the film, serving only to rob Snake of some his mystery. It deserved to be on the cutting room floor.

Big Challenges in Little Manhattan is a 15-minute feature looking at the visual effects of Escape From New York. Taken from the 2015 special edition Blu-ray, there are interviews with Dennis and Robert Skotak, and some great behind the scenes images of the models and matte paintings they used. There’s even a brief discussion of a young visual artist called Jim Cameron, who worked on the film. He went on to make a few decent films.

Also from the 2015 special edition is an interview with Joe Unger, who appeared in the afore mentioned deleted opening scene. His name is in the credits, but he himself never made it into the film. There’s also a photo gallery with loads of behind the scenes pics, and a selection of the fabulous original trailers. I know trailers are big business these days, and an art-form all of their own, but I love these old ones.

The box set also comes with art cards, a brand new poster, a copy of the iconic soundtrack, and a 48-page booklet featuring an essay from legendary horror writer and critic Kim Newman. For those of you with UHD TVs, there’s also a disc with the film in ultra high definition. For more information about the 4K restoration, and where you can find screenings of The Fog, They Live, Prince of Darkness, and Escape from New York near you, visit www.johncarpenter4k.co.uk