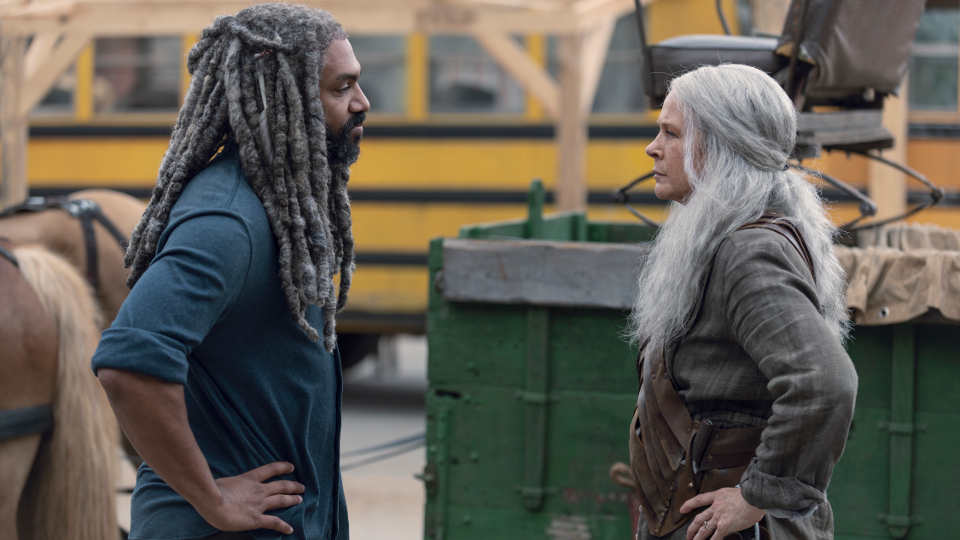 In the latest episode of The Walking Dead, a group of strangers tested Alexandria’s trust and patience.

The episode took place six years after Rick (Andrew Lincoln) blew the bridge to save his friends. The survivors have been hard at work on their communities. Michonne (Danai Gurira) now leads Alexandria, where they’ve built a mill and raised livestock. Carol (Melissa McBride) has married Ezekiel (Khary Payton) and they lead the Kingdom together. We’re not completely sure if Maggie (Lauren Cohan) is still leading hilltop as she wasn’t shown or named.

The action switched to the end of last episode where a group from Alexandria, found a new group of survivors. They were fighting for their lives when Rick’s daughter Judith (Cailey Fleming) saved them. The new group is comprised of Magna (Nadia Hilker), Luke (Dan Fogler), Connie (Lauren Ridloff), Kelly (Angel Theory) and Yumiko (Eleanor Matsuura).

Going against Alexandria’s rules, Judith convinced Aaron (Ross Marquand) that the should let the group join them. They took them back to Alexandria where Michonne reluctantly agreed to let them stay overnight while Yumiko received treatment for her injuries. Gabriel (Seth Gilliam) decided that the council would hold a meeting the next day to decide their fate. Last we saw of Gabriel before the time jump he was romantically involved with Jadis before she left him. This episode revealed that he’s moved on and now involved with Rosita (Christian Serratos).

At the council meeting the new group were asked to explain their stories. Magna used to be a waitress, Luke taught music, Kelly was a student and Connie worked as a journalist. Like everyone they had lost a lot of friends along the way. The meeting seemed to be going well until Michonne spotted that Magna had tried to conceal a prison tattoo. Michonne also suspected that Magna hadn’t given up all her weapons. She was proven right when a belt buckle was surrendered that was also a knife.

Magna suggested that their group take Alexandria with a surprise attack. They held a vote and all voted against her. Instead she made peace with Michonne and gave up her knife. We also found out that Michonne did have a baby with Rick and now has a son, Rick Jr. Michonne offered to take the group to Hilltop who she said could help them.

Meanwhile, at the Kingdom we see little Henry has grown up and wants to move to Hilltop to train as a blacksmith with Earl. His father, Ezekiel, was nervous about him going away but Carol said she’d take him. On the way they were ambushed by Jed (Rhys Coiro) and some of the Saviours – it seems that the Sanctuary is no more.

Outnumbered, Carol and Henry had no choice but to allow Jed to take half their supplies. He decided to let her live as she had spared him previously. Before letting them on their way, he demanded Carol’s wedding ring. Henry was mad and took a swipe at Jed, knocking him off his feet. Carol stopped the fight and gave up her ring.

Later that night, while Henry was sleeping, Carol tracked down the group of Saviours. While they were sleeping she covered them and their camp in petrol. After waking Jed she set the camp on fire, burning the group alive. The next day Henry spotted the ring back on her finger. Before heading to Hilltop they made a stop to see Daryl (Norman Reedus) who apparently now lives alone.

Elsewhere in the episode, Rosita and Eugene (Josh McDermitt) decided to set up an antenna to boost their radio signal. While installing the equipment they spotted a large herd of walkers approaching. Eugene tried to race back to the ground but accidentally knocked the bottom ladder out of the way. He had to drop and in doing so bust his knee.

Eugene said he couldn’t make it but Rosita grabbed him something to use as a crutch and forced him to get up. They struggled but managed to stay ahead of the herd. Eventually they managed to leave the road and cover themselves in mud. They lay there terrified as the herd shambled by. Suddenly they heard someone say “Where are they?” and “Don’t let them get away”. It looks like we’ve just had our first encounter with new enemy, The Whisperers!

Can’t wait for the next episode? Check out our preview of The Walking Dead – 9×07 Stradivarius.