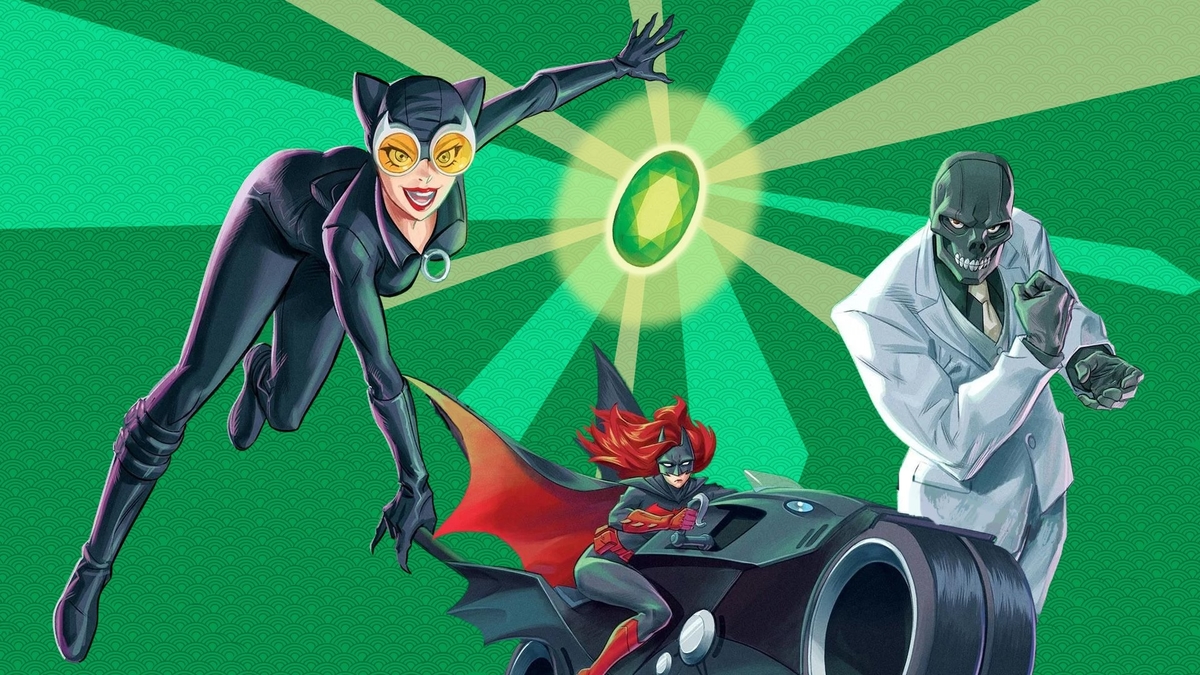 The latest, highly anticipated DC animated movie has arrived and focuses on everyone’s favourite cat-burglar. A beloved character, not only amongst Bat-fans but the whole DC Universe, Catwoman is one of the greatest comic book anti-heroes of all time. Selina Kyle has a layered and complicated story – one that lends itself perfectly to this tale and showcases why her enduring appeal hasn’t faltered over the years.

The sultry tones of Elizabeth Gillies were made to voice a character like Selina Kyle. Gillies encapsulates everything you need for this iteration of Catwoman to hit the road running, with a blisteringly effect start to this animated tale that showcase why she’s purrfect for the role (no… I’m not sorry). Coupled with some wonderful animated and a good, energetic pace, ‘Catwoman: Hunted’ starts off in impressive fashion.

The world’s most valuable emerald has caught the eye of the Catwoman, but it is currently under the protection of Leviathan, a mysterious criminal empire who have just recruited Black Mask (Jonathan Banks) to their ranks. It’s not long before Selina is on the run, but with the introduction of Batwoman (‘Brooklyn Nine-Nine’s Stephanie Beatriz), who offers her a tempting proposition to clear her name, perhaps this Cat can play both sides?

The film starts with a jazz-infused soundtrack that adds a different style to this film, compared with DC Animation’s most recent output. Very much its own film, ‘Catwoman: Hunted’ uses its soundtrack to conjure up a fresh new world for Gillies Catwoman to leave her mark. At times, the music does sound like a particularly rambunctious soundtrack to Frasier, but it ultimately works in setting this film apart from the rest.

The opening sequence of Catwoman making her way into a highly guarded party and stealing a rare jewel is very effective. It quickly establishes Gillies as a very effective Catwoman and demonstrates the femme fatale element, something which is used a lot in this film. There’s great exchanges between Gillies and Beatriz, with some bumbling sexual tension always punctuating their dynamic, with both actresses creating a fine double-act to carry this movie.

The supporting cast are very impressive with acting heavyweights like Jonathan Banks relishing his turn as the gangster Black Mask. Another alumni from the TV series ‘Community’ finds Keith David doing a bang-up job as the voice of Tobias Whale. One of best fight scenes in the movie features Solomon Grundy voiced menacingly by Steve Blum. Kelly Hu delights as master assassin Cheshire and Brit-born Kirby Howell-Baptiste commands the screen as Barbara Minerva. ‘Star Trek’ legend Jonathan Frakes is entertaining as King Faraday, who teams with ‘The Walking Dead’s Lauren Cohan as Julia Pennyworth, Alfred’s daughter who work alongside Batwoman.

Extras on the Blu-ray release include the featurettes ‘When the Hunter Becomes the Hunted’ and ‘Catwoman: The Feline Femme Fatale’- It’s complicated. Discover the origins and evolution of Catwoman, as filmmaker and industry legends reveal why Selina Kyle, the Catwoman, is both one of the greatest comic book supervillains and greatest anti-heroes of all time.

There are some nice twists and some surprise cameos in the film, which I won’t spoil. There’s also some exhilarating fight sequences, especially at the end of the film, which give the film some claws. Ultimately, it’s a fun and action-packed ride that utilises all of its characters well, and makes sure that Catwoman is front-and-centre of everything. I’d definitely like to see this iteration of Catwoman and Batwoman work again sometime. I think their double-act has real potential to grow, and could be the start of another great animated era for the character of Selina Kyle/Catwoman. With the character coming back to the big screen once again in Matt Reeves hugely anticipated movie ‘The Batman’, with Zoe Kravitz sure to hit it out of the park as Catwoman, perhaps its high time Catwoman re-establishes herself on all fronts. ‘Catwoman: Hunted’ is a good starting point for her animated renaissance.