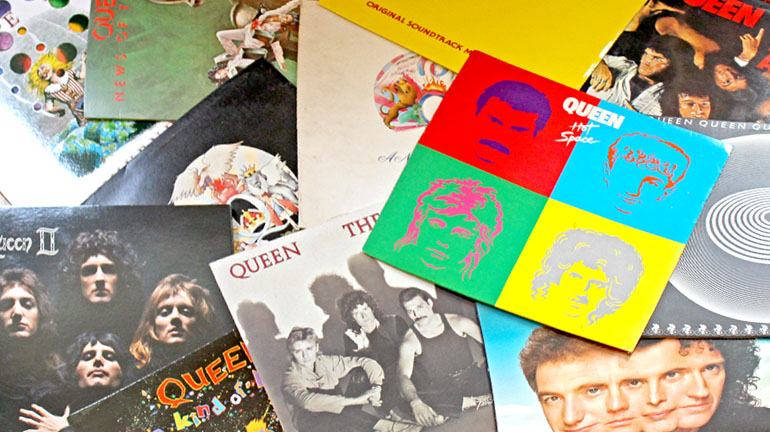 As Bohemian Rhapsody smashes the box office – despite a counter-offensive from some critics – the music of Queen has once again come to dominate the radio waves.

We all know the big hitters such as We Will Rock You and We Are The Champions, probably thanks to someone in the family owning a copy of Queen’s Greatest Hits – itself the biggest-selling record of all time in the UK.

But what about the studio albums? Between 1973 and 1995, the band was responsible for no less than 15 records, not including scores of live collections and compilations.

Working through some of the most memorable music of our time, we count down our top ten best Queen albums from 10 to 6:

The album every critic seemed to hate in 1982 has somehow stood the test of time. Dedicated Queen fans rebelled against its pop influences, but Freddie Mercury was determined to bring the sound of the New York club scene into an album people could dance to.

You can understand the dissent. It’s unapologetically synthetic, elbowing rock drums and guitar aside for sequencers and electronic keys. John Deacon’s bass doesn’t get much of a look-in, and when Roger Taylor gets to his kit the skins have never sounded duller.

But there’s something addictive and racy in this punchy party album. Michael Jackson was allegedly inspired by its pioneering production and it influenced his Thriller album, so it can’t be all that bad. In many ways, perhaps Freddie’s disco-rock fusion was just too ahead of its time.

Memorably, this record climaxes with Under Pressure – the fluke bastard prince of Queen and David Bowie. It’s just a pity it’s an only child.

The album which followed A Night at the Opera doesn’t quite reach the heights of its predecessor, offering a frenzied pick-and-mix of ballads, progressive rock and campy show tunes.

Yet it’s still brilliant. Tie Your Mother Down is pure glam rock of the era, whilst the virtuosity of Somebody To Love and Good Old-Fashioned Lover Boy firmly secures this album’s position in our top ten.

Ever mixing their genres, the record also features the memorably hypnotic Drowse which borrows generously from Pink Floyd, whilst the aggressive White Man is perhaps the band’s last love letter to Jimi Hendrix.

Something of a slow burner, the record ends on a high with…

Discover: Teo Torriatte (Let Us Cling Together) – A stirring, melancholic eulogy with a haunting vocal and angelic harmony which escalates into an uplifting chorus.

Flash! I love you, but we only have 14 hours to save the Earth!

Probably one of the most iconic soundtrack albums of all time, this isn’t just a great movie tie-in but also a fist-pumping Queen album.

Bigger and better than the film it served, Flash Gordon is unrestrained bravura rock opera. Mixing dialogue from the movie with energetic guitar solos and a fat synth underscore, this album is responsible for many of the oft-quoted lines recalled from the movie.

Discover: Crash Dive on Mingo City – Brian May goes to war with the Yamaha CS-80 synthesizer in the best traditions of the BBC Radiophonic Workshop.

Produced in the shadow of their frontman’s terminal illness, this is a heavy-hearted and bold Queen album with Freddie knowing it will likely be his last.

The Show Must Go On screams out in Queen’s classic traditions, but it’s alarmingly bleak, as is the subversively sinister I’m Going Slightly Mad – Freddie’s admission to the mental impact of his AIDS treatment. The radio-friendly Headlong offers more cheer in one of Queen’s last rock-out numbers, evidencing the group’s determination to seize life at every opportunity.

These Are The Days of our Lives is a beautifully reflective number from Roger Taylor, as he observes his life shifting into its autumnal years. For Freddie, his lilting vocal lead makes the memorable lyrics all the more poignant.

Innuendo is a triumph and a painful reminder of what Queen could have gone on to produce into the 1990s. We’ll never know, but the album’s ambitious scale leaves us with an operatic grandeur which demonstrated the maturing talents of the band.

Featuring a scary giant robot on its cover as it picks over the bloodied bodies of the band, this album was responsible for two of the biggest stadium numbers of all time.

Opening with We Will Rock You and We Are the Champions, you’d imagine there would be nowhere else to go, but the album soon settles down to offer a robust set of numbers which feel catered towards live performance. This is unashamedly grand, bombastic rock music designed to fill big venues.

As if to confuse matters, this album is also home to Sheer Heart Attack – which doesn’t feature on the earlier album of the same name – thrusting a rumbustious punk-rock counter-offensive which cheekily slaps the chops of The Sex Pistols.

Bassist John Deacon – the silent goose who would lay a golden egg on every album – drops another double-yoker with Spread Your Wings. It’s a lesser known Queen gasser, typifying their rich late-seventies sound before the synth revolution.

Discover: Fight From The Inside – Roger smashes out a steamy, sleazy number with Led Zep influences and a screaming vocal. Filthy.

By their own admission, Queen’s music changed throughout the years. From glam to disco; prog-rock to funk; opera to music hall – arguably there’s something for everyone in Queen’s prolific discography.

Do you agree? Discover our number one Queen album as we complete our top ten in part two.

Watch more Queen music videos on the official Queen YouTube channel and find out more about the band at queenonline.com.