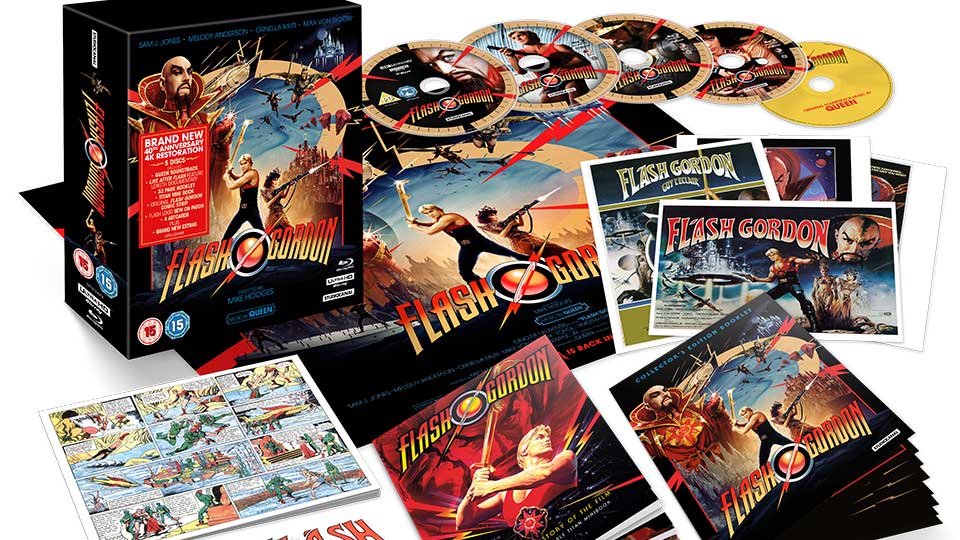 Studiocanal is to release a new 4K Ultra High Definition restoration of the camp cinema classic Flash Gordon, which first hit cinema screens in 1980. This will coincide with the film’s fortieth anniversary.

Collectors can take their pick – Flash Gordon will be available on 4K UHD Collector’s edition, Blu-ray, Steelbook, DVD and digital from August 10th 2020.

The cult classic film – as gaudy as it is exciting – has been described as a space opera. Remarkably, it had the same director as the hit gangster film Get Carter (Mike Hodges), but he understood the tone of the piece. A camp rock soundtrack by Queen, extravagant costumes and lavish, brightly-coloured sets ensured its reputation as a visual feast.

The cast is a remarkable line-up of British talent. Future James Bond Timothy Dalton swashes plenty of buckle as Prince Barin. Bond ally Tool (Fiddler on the Roof) plays a crazy scientist. Jason King-star Peter Wyngarde is behind Klytus’ fearsome mask, and the force of nature that is Brian Blessed plays the bird man Prince Vultan. Outclassing everybody is Max Von Sydow as the evil Ming the Merciless. Keeping the film grounded in a passing semblance of normality are Melody Anderson as Dale Arden and Sam J. Jones as Flash (he’s more recently somewhat resumed the role in the Ted films).

For the new 40th Anniversary 4k restoration, Flash Gordon was scanned from the original 35mm negative to produce 4K files.

This restoration was approved by Director Mike Hodges in May 2020, who has commented, saying: “I’m very grateful to STUDIOCANAL for this brilliant 4k restoration. The restoration captures perfectly the vivid colours of the sets, skies and costumes. It also corrects some of the problems encountered with the special effects system we used. With Chroma key compositing we could insert skies, rocket ships, hawk-men, pretty well whatever we wanted, into the blue backing built into the studio sets. The problems came later when we had to eliminate, for example, the wires used on the hawk-men. We were eventually successful but even then some 35mm prints were variable and the wires would be back again. With this new restoration that problem is thankfully laid to rest. Of course Chroma key is primitive by the side of the current process, CGI (Computer Generated Imaging). That said I’m pleased we stuck with the old fashioned system. CGI would have been too slick. After all Flash Gordon was a cartoon strip from the 1930s brought back to life on celluloid some five decades later.”

See the trailer below.