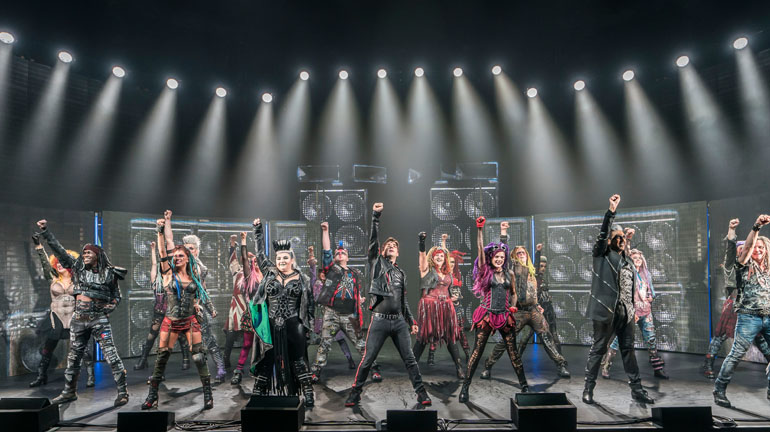 We Will Rock You Queen Musical Leeds Grand Theatre

Ben Elton’s enduring rock fantasy, inspired by the hits of Queen, earned the title of 15th longest-running West End musical before closing in 2012.

Now a new tour of We Will Rock You rides the revival wave of biopic Bohemian Rhapsody, landing at Leeds Grand Theatre in a rejuvenated and updated form until 23rd November.

First off, it’s worth remembering that We Will Rock You is one of the earliest modern jukebox musicals inspired by the discography of one band — and if the material was to be adapted in today’s documentary-driven world, the book behind the show would likely be very different.

That’s because Queen’s radio-friendly hits are near ready-made for musical theatre. All you’d need to do is retell the true, hellraising story of the band on stage. Their numbers are operatic in ambition, bravura in pomposity and broadly uplifting in their stadium-filling scale. The delivery and stage presence of their iconic frontman, the irreplaceable Freddie Mercury, is as theatrical as a rockstar could ever hope to be.

Sadly we don’t get much of that real-world context in this saccharine fantasy farce, save for a few gimmicky audio snippets and projections of the late showman. Rather, Ben Elton jettisons almost all mention of Queen to focus on an apocalyptic, dystopian sci-fi comedy — not your first choice of bedfellow for the band’s Greatest Hits Volume I, II or III.

This story is a crib of Nineteen-Eighty-Four meets Tron, where we’re encouraged to care for the romantic plight of Galileo-Figaro and Scaramouche (get it?) as they rebel against a corporate-controlled society hooked on the internet (very modern) who have forgotten the power of rock and roll. It’s a concept worthy of an after-school drama class.

We Will Rock You at Leeds Grand Theatre. Credit: Johan Persson.

So we get tribute numbers to all the big hits from Queen, including We Are The Champions, Radio Ga Ga, I Want To Break Free, Somebody To Love, Killer Queen, etc — mostly scrunched into scenes where they barely relate to the action, or worse, become bookended with glaringly spurious dialogue to aid transition.

To further confound singalong audiences, there’s also some needless tinkering with the lyrics to make them resonate within the featherweight narrative:

#All we hear is:
Cyberspace Ga Ga,
Marketing blah blah…#

But within this hastily malformed confection, there’s still some hope if not a lot of wasted talent. Michael McKell pitches Buddy — a sort of Mick Jagger waif — with some fruitful comedy timing, and there’s an earnest run of vocal work from principals Adam Strong, Ian McIntosh and Elena Skye.

The production is also heavily resourced with impressive animated videowalls, giving the landscape a dynamic, Tron-like technological vibe. And there’s no escaping the thunderingly loud musical arrangement which establishes an element of stadium scale.

Sadly there’s no hiding some of the baggy choreography at work here though, and relentlessly inane dialogue with unfunny, crass jokes does little to support the hardworking cast in the lull between musical numbers.

We Will Rock You demonstrates how not to refashion outstanding source material into the musical medium. Lazily repackaged into a mass-market product which bleaches the bones out of the original work, this prefab compilation of greatest hits relies too heavily on its music and hopes its punters will overlook the poverty of its scripting. That said, it will probably still entertain those with a vague appreciation of Queen’s hits — and the final number should ensure many leave on something of a nostalgic and wistful high.