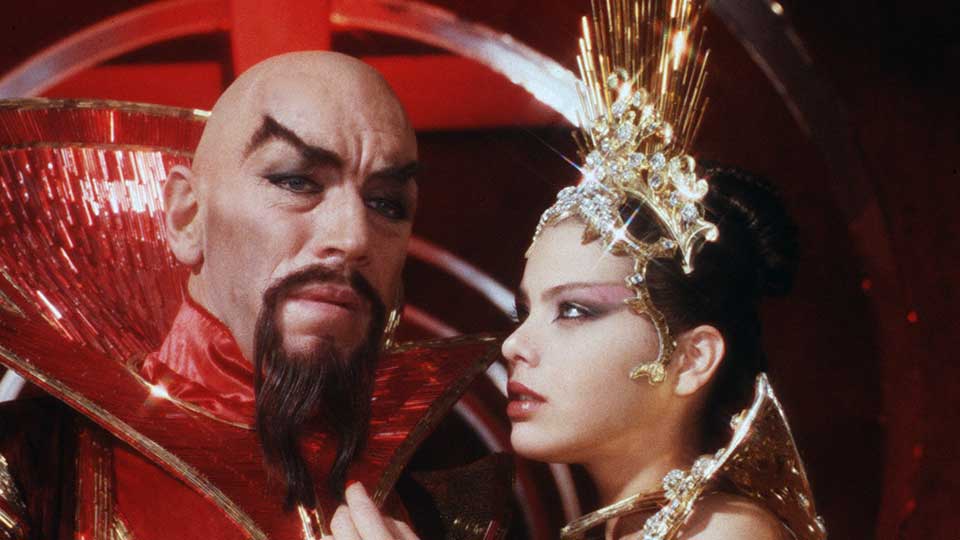 Most children of the 70s and 80s have a special place in their heart for Flash Gordon, the camp and gaudy science-fiction cult classic directed by Mike Hodges (Get Carter). The film is a lot of fun, but also has plenty of sinister moments to spook younger viewers, and a fantastical adventure at its heart.

The plot is every bit as audacious and operatic as the garish and vivid sets and costumes. Planet earth is beset by seemingly natural disasters, but crazy scientist Hans Zarkov (Topol) believes them to be the result of extra-terrestrial interference. He kidnaps American football hero Flash Gordon (Sam J Jones) and his New Yorker love interest Dale Arden (Melody Anderson) and takes them aboard his home-made rocket to the planet Mongo. There, they witness several warring tribes such as the Arborians (led by Timothy Dalton) and the Hawkmen (led by Brian Blessed), presenting offerings to the Emperor Ming the Merciless (Max von Sydow). Flash is sentenced to death, but thanks to Ming’s daughter Aura (Ornella Muti) he manages to escape, but he must bring the warring tribes together if they are to free the tribes from Ming and save earth.

Director Mike Hodges, perhaps an unusual choice given his best-known work prior to Flash Gordon was the gritty British gangster flick set in Newcastle (Get Carter), succeeds by lining up a magnificent cast and ensuring that they all fully commit in a full-blooded way to the exaggerated comic book world he skilfully brings to life on film. Much comment has been made over the years over the limitations of Sam J Jones’ acting ability. In some ways, this doesn’t matter. The square-jawed lead has a simple heroism and decency, but Flash is essentially the straight man to the much larger characters he’s surrounded by. In full swashbuckling form is a pre-James Bond Timothy Dalton, whose scowling, moody and romantic Prince Barin may well be a movie-long audition for the role of 007 which he played so brilliantly and all-too fleetingly. Dalton (who gets all the best lines) is a great double act with Brian Blessed – an actor who has never been shy of giving his all – and who is the beating heart and the energy of the rebel resistance as Prince Vultan (who gets all the most memorable lines).

Among the baddies, there are plenty of notable performances too. Peter Wyngarde (Jason King), hidden behind a golden mask as Klytus, gives a brilliant vocal and physical performance; and of course Max von Sydow steals every scene that he is in as Ming the Merciless. All of the actors benefit enormously from Danilo Donati’s incredible costumes and design, but none more so than von Sydow, who exudes operatic menace from within a resplendent red cape.

If Flash Gordon is part of your nostalgia, then you will always adore watching it, but for the uninitiated, it’s an unremittingly entertaining film. Don’t think too long and hard about the plot – just accept it as a camp space opera and suspend your disbelief. A cracking soundtrack by flamboyant rockers Queen keep the action moving and the audience thoroughly entertained. Colourful, outrageous, and blisteringly entertaining, Flash Gordon will carry on finding new audiences and delighting loyal fans for decades to come.

This 4K restoration of Flash Gordon brings the clarity and resolution of the picture quality to a whole new level. The colours have never looked so vivid and the picture so sharp. There are plenty of special features for aficionados to enjoy, though it depends on which package you buy. The Blu-ray discs have separate audio commentaries with Mike Hodges and Brian Blessed. On the second disc you can find extras including interviews with some of the cast, a short to-camera piece by Queen guitarist Brian May, and footage from 2015’s 35th anniversary reunion that brought together Mike Hodges, Melody Anderson, Brian Blessed and the late Max von Sydow in London. Decide which format you want and add it to your collection. Special screenings occurring at selected cinemas too.