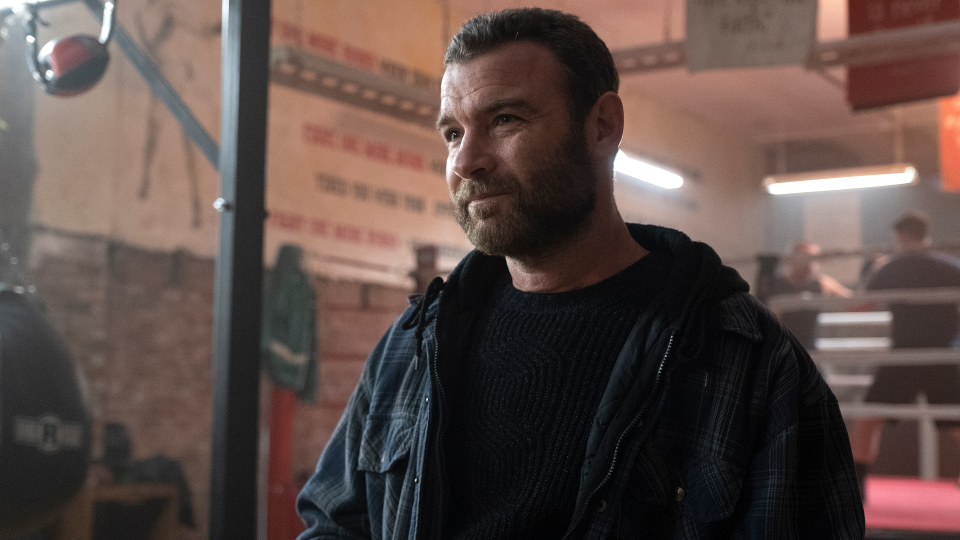 In the season six premiere of Ray Donovan, Ray (Liev Schreiber) met a new friend and decided to stay in New York.

The start of the episode picked up where the season five finale left off, with Ray following Abby off a building into the East River. His fall was witnessed by on-duty Staten Island cop, Sean “Mac” McGrath (Domenick Lombardozzi) who was in the middle of making an arrest.

With his suspect locked in the back of his patrol car, Mac wasted no time in jumping into the river. He managed to get to Ray and drag him out before beginning CPR. Mac’s quick actions saved Ray’s life, but as Ray came to he took a swing at Mac and then tried to head back into the water. Mac grabbed his baton and knocked Ray out.

Ray awoke in a prison cell but it wasn’t long before he was released. Sam Winslow (Susan Sarandon) needed his services so bailed him out. Lena (Katherine Moennig) came to pick Ray up and take him back to LA but he refused and said he was staying.

As Ray does, he headed to the nearest bar for a whisky. There he ran into Mac who asked him some questions about what happened and how he got released. He suggested Ray should buy him a drink for saving his life so Ray obliged. Mac seems to have a similar drink problem to Ray and later got into a fight with some firemen. Ray considered leaving him to get beaten but then decided to join in and got beaten himself. The pair headed back to Mac’s place.

Before Ray could take off, Mac invited him to stay for a drink. He told Ray some of his problems like he’s having a divorce and that he lost his dad to cancer before they could finish a motorbike they were restoring.

A small unspecified time jump later, and Ray was lodging with Mac. Normally one to look after himself, Ray had let his hair grow a bit, put on some weight and was now sporting a beard. He took a call from Winslow but didn’t want to go back and work for her.

A reporter came to the house, she was doing a story on Staten Island cops. If it was published it would be bad for Mac so Ray met with Winslow. He agreed to help her friend Anita Novak, who was her NYC mayoral candidate. Ray met with Novak who explained she had a one-night stand with a man she agreed to meet. She caught him recording her and had a black eye from a fight that broke out. She wanted Ray to get the recording back.

Ray paid a brief visit to see his brother Terry (Eddie Marsan) who looked fit and healthy running a new gym. Terry agreed that Mac’s son, who was getting bullied, could come and work out with him. He told Ray he looked fat and should come to work out too. Before leaving, Ray bumped into his daughter Bridget (Kerris Dorsey) who seemed well.

Although Ray had gone to Winslow to try and help out Mac’s problem. Mac wanted to get involved himself and proposed paying the guy he arrested at the start $5,000 a month for 2 years. Ray said Mac should stay out the way and took the money for him. There Ray ended up getting himself another beating.

Elsewhere in the episode, Bunchy lost a custody battle for his daughter. Daryll (Pooch Hall) was working on the film production of Mister Lucky which was loosely based on his father’s script. In prison, Mickey (Jon Voight) wasn’t happy to hear about the film. He worked on a plan to get out which involved a bed pan, lots of tobacco and water. After mixing the ingredients he exercised until he had a heart attack.

At the end of the episode, Ray awoke on the street after his beating. He received a phone call from Novak who had a situation she needed his help with. She wouldn’t talk about it on the phone, so Ray went to her location. Novak had agreed to meet the man again to pay him off, something had gone wrong and she’d ended up killing him. Looks like Ray’s found himself plenty more trouble.

Can’t wait for the next episode? Read our preview of Ray Donovan – 6×02 Staten Island, Part Two.