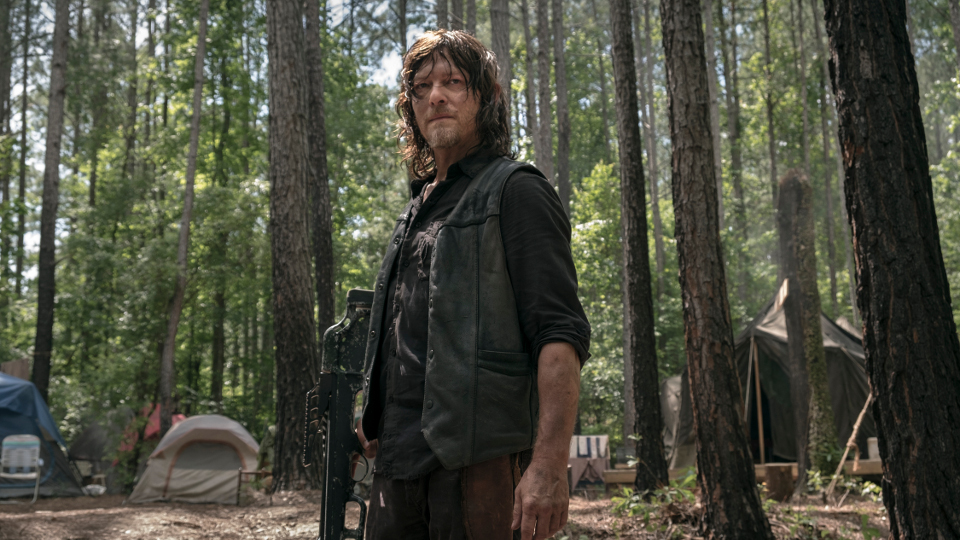 In the latest episode of The Walking Dead, Rick’s (Andrew Lincoln) vision for the future was threatened by a mysterious disappearance.

At the start of the episode, we got to see a little more of how life had become for Rick, Michonne (Danai Gurira) and Judith. With things being pretty much the best they’ve been for a long time the family were happy. So much so that Rick even suggested he and Michonne try for a baby.

As ever, the relative peace was disturbed by the news that Justin (Zach McGowan) has been deliberately killed by someone and was now a walker. The Saviours were getting increasingly worried that they were being targeted as Justin wasn’t the only one of their numbers to turn up dead.

Maggie (Lauren Cohan) was stopped by a group of Saviours as she was on her way to deliver the food she promised to the bridge camp. Their ringleader Jedd (Rhys Coiro) was confrontational and helped himself to a tomato before calling Maggie ‘The Widow’. Laura (Lindsley Register) defused the situation and thanked Maggie for the supplies.

Things started to turn nasty in the camp as the Saviours and everyone else began fighting. A few tried to break things up before Rick rode in on horseback and ended the standoff. He realised he needed to work out what had happened to those who went missing to restore order.

Rick has his group go off in pairs to investigate what was going on. Maggie and Cyndie (Sydney Park) stumbled across an old house that Oceanside used in the past. Part of the roof had come loose and its banging was attracting walkers. The pair began to clear the walkers before becoming overwhelmed. Rick and the others arrived in time to help.

Later, they came across an unconscious Beatrice (Briana Venskus). She said she was attacked from behind and then realised that Arat (Elizabeth Ludlow) was now missing. They found Arat’s things nearby and realised she had been taken.

Back at camp, Rick called a meeting to discuss their next moves. Jerry (Cooper Andrews) asked if they found who was responsible would it be a Gregory or Negan, meaning execute or prison. Rick went off with Carol (Melissa McBride) and admitted to her that he thinks about killing Negan everyday. They were ambushed by Jed who held a knife to Carol’s throat while demanding Rick give up his gun. Carol had a knife herself and stabbed Jed but let him live.

Daryl (Norman Reedus) and Maggie found a clue on their search of a harpoon spear. Daryl connected the dots and realised who was behind things – Oceanside. They tracked down the group who held Arat and found them about to execute her. They explained that they were getting revenge on the Saviours who killed their loved ones. They had used Maggie’s hanging of Gregory for inspiration to rise up. They decided to leave the Oceansiders alone after hearing Arat killed Cyndie’s young brother.

Elsewhere in the episode, Gabriel (Seth Gilliam) lied to Rick to cover for Anne (Pollyanna McIntosh). Gabriel confronted her to ask if she knew what was happening with the Saviours and she denied knowing anything. He later followed her back to the junkyard where he watched her retrieve a concealed walkie-talkie. She messaged a man and said she saw their helicopter. They wanted to know if she had an A or B and she replied neither. She wanted to join his group and the man said she needed to get them an A.

Gabriel revealed that he was spying on her and asked about the conversation he overheard. Anne explained that she used to trade people with the group for supplies. She asked Gabriel to leave with her for the new group. He refused and said he had to inform Rick of what had gone on. She said she used to think Gabriel was a B and knocked him out.

At the end of the episode, Maggie told Daryl that they had tried Rick’s way. It looked like she’s decided it’s time to kill Negan.

Can’t wait for the next episode? Read our preview of The Walking Dead – 9×04 The Obliged.