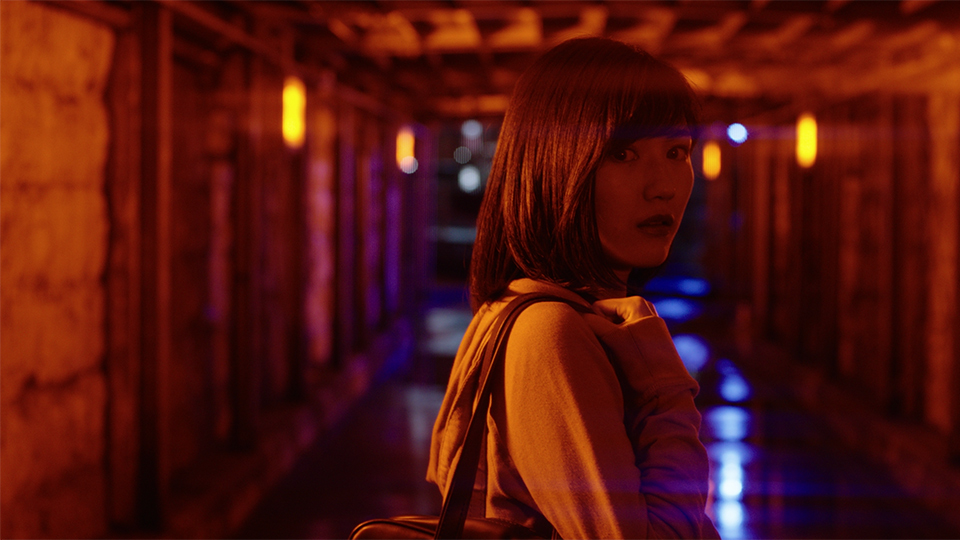 This is a first for Walter Presents – a Japanese horror series! We’re used to Walter providing us with some magnificent thrillers from Scandinavia, Belgium, Spain, the Netherlands and even Latin America – but now they’ve cast their net into Asia Pacific waters with this intriguing joint Japanese/American production.

If you don’t want any spoilers at all, we suggest you stop reading now.

The show centres around Dolly (presumably a nod towards Dolly the sheep) International Girls Academy – a high-end seat of learning where all the impeccably turned-out young women are being the types of teenagers we see all around the world; albeit highly privileged ones. But their sheltered lives are shattered upon the arrival of a new girl – Maki – who, their teacher tells them, has arrived from America. Maki is rather more tight-lipped about where she’s come from, however.

Strange things start happening pretty much right from the start; no sooner has Maki taken her seat in class when a bird flies into the window, leaving a bloody splatter on the glass. The students all run to window in horrified fascination, leaving a smiling Maki sat at her seat. Spooky!

Elsewhere we see a debate on The Future And Ethics of Regenerative Medicine between a Western professor, Gary Grossman, and his Japanese friend, Akihito Seto. The students listen intently, until a young man in a wheelchair decides to raise the stakes by performing a bloody act of violence. Be warned – this is gory stuff! There’s a gloriously decadent amount of bloodshed throughout.

Without wanting to give too much away, more weird stuff happens around Maki – bleeding black blood, for example; and showing remarkable running speed, despite wearing patent court shoes. But the main shocker in episode one occurs when a student – who has been investigating Maki’s background – seemingly jumps from the top of the school building, landing in a twisted, mangled mess on a picnic table where some of the girls are eating. There’s also another gore-fest right at the end – but I’ll leave that to you to enjoy!

The show, which was original aired in 2016 on Hulu in Japan, is directed by Ryo Nishimura and Joseph White, produced by renowned Japanese producer Yasushi Akimoto (One Missed Call – he also has a soundtrack credit on Wreck-It Ralph, bizarrely) and executive produced by the man behind Saw II, III and IV – Darren Lynn Bousman.

Incidentally, all the high-school girls are played by women from the AKB48 Japanese idol pop group – as such, the acting isn’t exactly Oscar material. But that’s not really the point, and to be fair to them, they make a decent fist of it. The writing and direction, though, are a delight to watch. And the whole thing is just fabulously entertaining, slightly camp and frequently hilarious. If you’re in the mood for a mildly scary, fast-paced and well-directed blood-fest, this is well worth a binge.

Walter once again has something to crow about! Oh, that was awful…

Walter Presents: Crow’s Blood is part of FILMFEAR on Film4 and airs on 31st October at 10.50pm. The entire series will be available to stream on demand on All 4 following its Film4 screening.