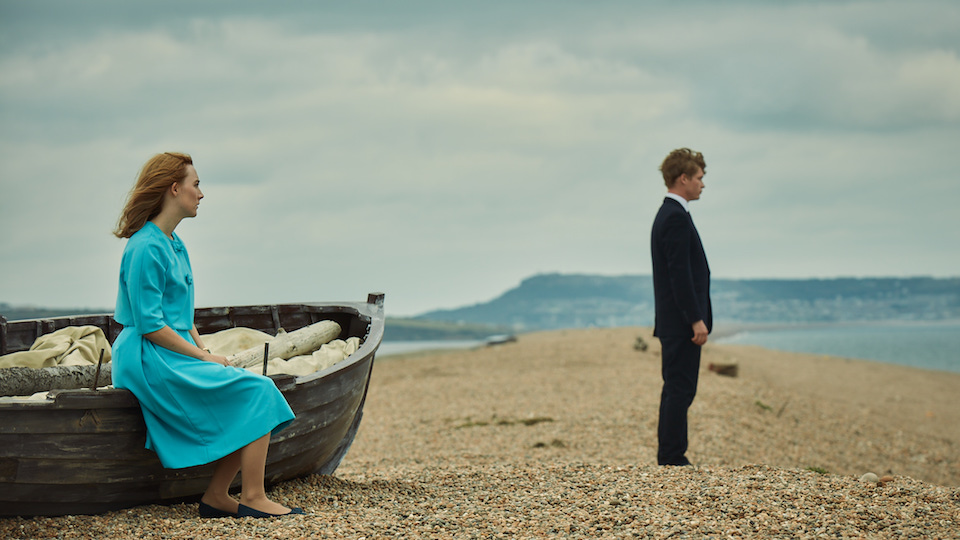 Ian McEwan’s 2007 novella On Chesil Beach tells the simple story of a disastrous wedding night between two innocent young people who came of age before the sexual revolution of the 1960s. The whole book takes place over a few agonising hours, and then the final ten pages rattle through the next few decades. It is hardly material that is ripe for cinematic adaptation. But McEwan himself has taken on the task and fleshed it out into a feature film directed by four-time Olivier award winning theatre director Dominic Cooke, here making his filmmaking debut.

Set in England in 1962, during the final moments of crippling post-war repression, before the Cultural Revolution happened, Edward (Billy Howle) and Florence (Saoirse Ronan) have just been married. They are honeymooning in a seaside hotel on Chesil Beach in Dorset. Edward appears as the slightly more progressive of the two, he likes rock n’ roll music, whereas Florence, a concert violinist who was brought up among the upper middle classes, is terribly uptight and repressed.

McEwan and Cooke fill in the gaps from the novella with flashbacks revealing how the couple met, what their home lives are like, and emphasising the political and class divide the two young lovers must overcome. Florence’s parents despair at her left-leaning principles, and consider Edward to be nothing more than a country bumpkin. His family are dealing with the long-term care of his brain-damaged mother (Anne-Marie Duff), which has had a profound impact on Edward. Anger, the fear of humiliation, and the spectre of abuse loom in the dark corners of these flashbacks.

So as Florence and Edward slowly and painfully edge closer to the bedroom and closer to the consummation of their marriage, Cooke intercuts this with the above mentioned flashbacks and some longer vignettes, creating a mosaic-like structure for the film. Whilst it was probably essential for the sake of expanding the narrative into something resembling a feature film, it does very little for the overall story and ultimately robs it of drama. Case in point, those familiar with McEwan’s writing will be aware of his love of music, and both he and Cooke indulge this far too much in some of the flashbacks, and the middle act really drags as a result.

Saoirse Ronan is excellent in nearly everything she is in, so it is no surprise to find her yet again in supremely watchable form. It’s as good a performance as you could expect from such thin material. Billy Howle is given the slightly more interesting role, and makes the most of it with an excellent, pent-up performance. With a key role in the Chris Pine/Robert the Bruce action epic Outlaw King on the horizon, this could be a good time for Howle.

Eventually we get to the main event, where after a passionate but restrained courtship of hand-holding and chaste kisses, Edward and Florence must now adhere to the pressure of societal norms and have sex as husband and wife. Neither of them have a clue what they are doing, and the awkwardness eventually results in an embarrassing, confusing, and messy climax.

In the aftermath confrontation on Chesil Beach, our initial views of these two young naïfs are completely transformed, as we finally see who they really are. As with the book, the film then takes a couple of giant leaps forward in time. First to 1975 and then to 2007. How you respond to these final moments in the film will ultimately depend on how you feel about prosthetic aging makeup. It’s not the best you’ll ever see, but it is certainly not the worst.

Casting everything that happened back in the early 60s in a new light, these final flashfowards have an abundance of heart and soul that the rest of the film sadly lacked. It won’t work for everyone, and you could easily level an accusation of unearned emotional manipulation at the film. And let me tell you, it certainly manipulated me. But in the end I didn’t care. Despite all its myriad flaws, this heartbreaking little story of Edward and Florence left this reviewer a blubbering wreck.