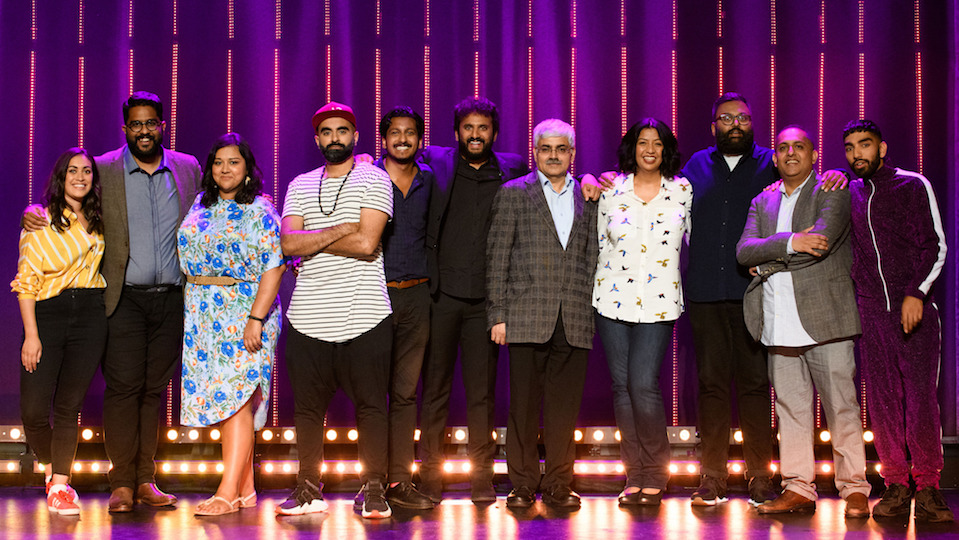 Comedian and host of BBC Two’s The Mash Report, Nish Kumar, presents The Big Asian Stand-Up tonight (17th August) on BBC Two. Showcasing a new wave of Asian comedic talent from the UK and beyond, the first gig airs tonight at 10pm with the second next Friday, 24th August. The shows are part of the BBC’s Big British Asian Summer, which celebrates the cultural and artistic contribution of Asian Britons.

Filmed in front of a live audience at the iconic City Varieties Music Hall in Leeds, Nish will introduce a mix of hilarious stand-ups. Award winning acts on the bill include, Tez Ilyas (Man Like Mobeen), Emily Lloyd Saini (BBC Asian Network), Ahir Shah (Edinburgh Comedy Award Nominee) and many more who also share a diverse voice that reflects the experience of second or third generation of immigrants to the UK.

Nish Kumar, currently at Edinburgh Festival Fringe performing his work in progress show, ‘It’s In Your Nature To Destroy Yourselves’, kindly took a brief break to chat with me recently.

Tell us about The Big Asian Stand-Up, it’s great that BBC Two have gathered Asian acts together in one showcase.

It’s exciting to be a part of it and to see where the stand up scene is for British Asians. I’ve been steadily breaking through since 2006. It’s a legacy of Goodness Gracious Me. They were the pioneers of Asian comedy. Thanks to Goodness Gracious Me a generation have grown up seeing that comedy is a career path open to Asians. What’s interesting is that stylistically there’s such varied performers and a really good mix of acts.

Of course, each performer will have an individual take on life regardless of their background. Do you ever feel frustrated that it’s still necessary to highlight your ethnicity rather than simply focus on performance?

No-one wants to be banging on about diversity, we all just want to be assessed on the merits of our work, but there’s still a need for representation. There’s a snap judgement made by the audience when you walk out on stage. It’s gradually moved on from people saying, ‘Oh no, an Asian’ to ‘Oh look, an Asian.’ Moving away from being a sub-genre of comedy is the aim. It’s the same for women. There was outrage when the BBC announced there had to be one woman on every panel show. Sandi Toksvig hosting QI meant that recently women outnumbered male guests 3-2 on the show which was great. You just need minor dominoes to fall.

Do you think there needs to be even more Asian comedy shows on TV like Citizen Khan?

I am always really pleased to see more Asian performers breaking through on TV. There’s always room for more. There was a long gap between Goodness Gracious Me, The Kumars at No.42 and now Citizen Khan.

The Big Asian Stand-Up was filmed in Leeds, you grew up in Croydon. Do you see a difference between northern and southern audience reactions?

There are a few cities around the UK with a captive audience for comedy, north and south. I’ve a particular fondness for Leeds as I’d friends there so, when I was starting out, I did a lot of gigs there. In London you only get five minute sets. In Leeds I was given the chance to do ten minutes and longer much sooner than I would have done in London. I started doing compèring because you get more gigs when you’re starting out. It coaches you in how to do crowd work. Although, at a BBC Two filming, people are not too rowdy. It’s exciting to be a part of it. It’s great that the BBC have given a vote of confidence by showcasing the breadth of Asian talent in stand-up.

You can see Nish in Edinburgh until 26th August performing his work in progress show ‘It’s In Your Nature To Destroy Yourselves’. Failing that, you’ll be able to see his UK tour from September 2018. Click here for dates, ticket prices and venue details.