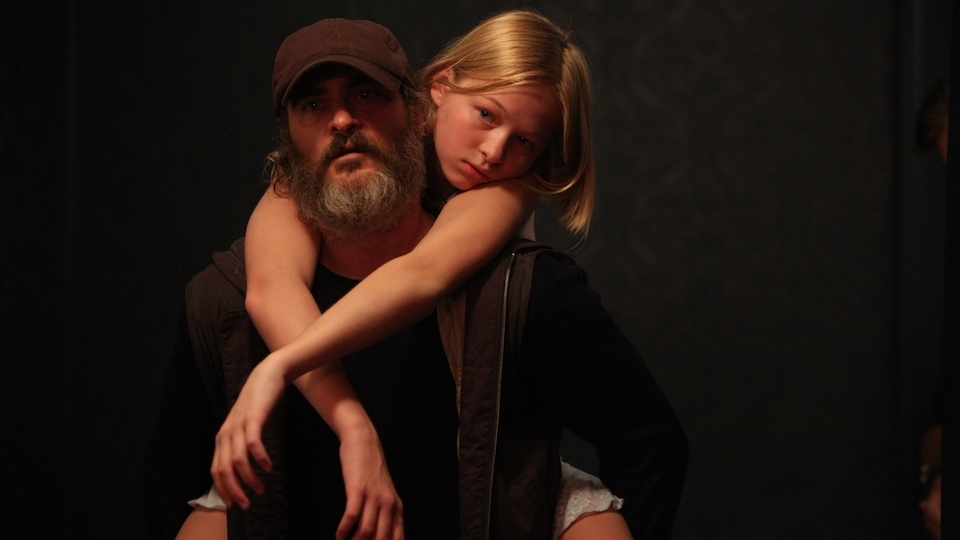 It’s been seven years since Lynne Ramsay scorched the cinematic landscape with her sensational adaptation of We Need to talk about Kevin – one of the best films of the last decade. Now she finally returns with You Were Never Really Here, a brutal and unsettling thriller, featuring a startling central performance from Joaquin Phoenix.

Phoenix plays Joe, a former soldier, traumatised by his experiences in the Middle East. He now works as a hired gun, rescuing children who have been trafficked into the sex trade. Like his preferred weapon of choice, he is a blunt tool, devastatingly efficient and sickeningly violent. His latest assignment sees him hired to track down Nina (Ekaterina Samsonov) the daughter of a US senator. No one officially knows she has been taken, and the senator wants her back quickly and discreetly.

So far so familiar, right? Another contemporary middle-aged vengeance movie, with some noble ex-special forces geezer cracking the skulls of Albanian mobsters, like Taken or Man on Fire? Well, not really. But that’s not to say it isn’t without cinematic provenance. The film that Ramsay most heavily evokes is Taxi Driver. Imagine if you will, after saving Iris and then failing to blow his brains out, Travis had decided to give up his cab and go freelance as a rescuer of missing kids and – for want of a better term – professional “fucker upper” of bad dudes. That will get you somewhere close to understanding what this film is really like, but even then, You Were Never Really Here is so much more.

A woozy and constantly unsettling film, more like a horror film than a standard thriller, Ramsay presents us with a nightmarish portrayal of a deeply troubled and lonely man. And yes, it certainly owes something to Scorsese’s masterpiece, but this is no mere homage. You Were Never Really Here is a dizzying and discordant character piece that is all it’s own thing. An unbearably tense, brutal, stylish and visually poetic descent into the hellish psyche of a man who can barely function unless he is smashing someone’s face to pieces.

Joaquin Phoenix is sensational. Transforming himself into a hulking bear-like presence, he goes places in this film that few actors even know exist, never mind dare to go themselves. He barely speaks in the film, instead articulating himself in the way he physically deals with other people. Whether it be the tender care he shows to his ailing mother, the merciless assaults he doles out to the traffickers, or the masochistic depravity he inflicts on himself.

You Were Never Really Here is a violent film, but not in the satisfying and thrilling way John Wick or the Taken films are, where the justice being meted out is exhilarating and laugh out loud fun. Here it is brutal, distant, and real. The visceral thrill of cinematic violence has been bludgeoned with Lynne Ramsay’s directorial hammer.

If you approach this film having seen the poster and think it is going to be similar to those other films, then you will most likely be disappointed. However, if you are open to something different, and are prepared for a ferocious and impressionistic exploration into one of the most fascinating characters in recent cinematic history, then this is the film for you. It is absolutely sensational, and a contender for film of the year.

In this article:Joaquin Phoenix, Lynne Ramsay, You Were Never Really Here