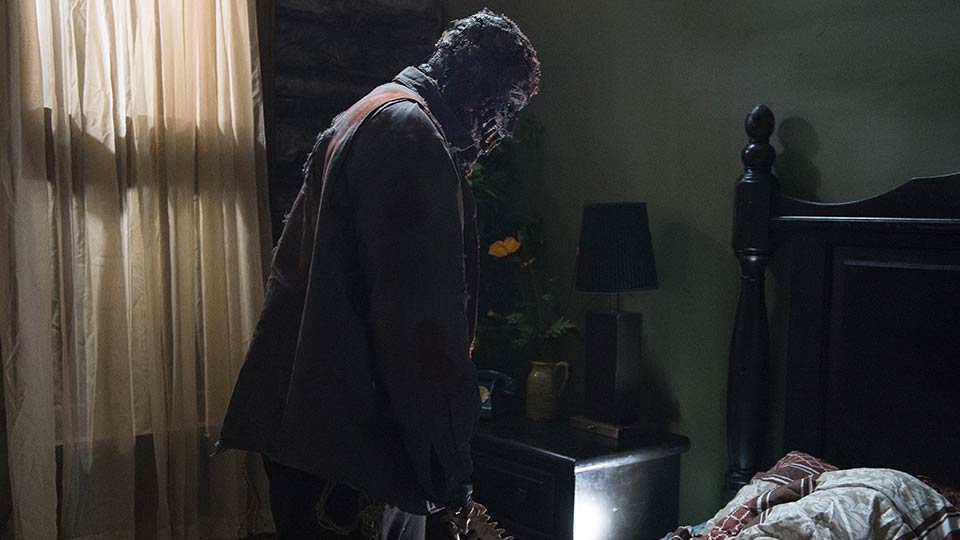 On New Year’s Eve, a group of seven friends decide to stay in a remote ski lodge in the mountains. Despite warnings from Sheriff Wyatt (Richard Grieco) that staying the lodge would be dangerous, the group agree to press on with their celebrations. As the party gets under way, they encounter Travis Crenna (John Hennigan), a man looking for his brother who went mysteriously missing days earlier. Unsure whether or not to trust him, the group is forced to pull together when a masked group descends on the lodge and they are thrown into a fight for their lives.

Minutes to Midnight is heavily influenced by many horror films from over the years including, but not limited to, The Cabin in the Woods, The Strangers and The Texas Chain Saw Massacre. Victoria Dadi and Christopher M. Don’s screenplay pays heavy nods to those films and classic tropes from the horror genre. You know from the opening moments that there will be few of the group left standing by the end and it’s fairly easy to spot the final girl from the very beginning. That doesn’t hamper the enjoyment of Minutes to Midnight though, which plays out like a love letter to horror fans.

Director Christopher Ray shows a lot of creative flair throughout the movie. Despite Minutes to Midnight being made on a budget, he doesn’t let that hold him back. While there may not be any jump out of your seat moments, Minutes to Midnight does hold your attention and there’s some very good use of lighting to heighten the tension. I must say that the costumes and effects are pretty darn good too, with the villains of the movie looking suitably creepy and unnerving. There’s a conscious less-is-more approach to the movie and for the most part that works.

Where Minutes to Midnight falls down is with some unnecessary nudity. Of course, the slasher flicks of the 70s were all about bare breasts and youngsters hooking up but it’s simply not needed here. Jena Sims reveals all during a shower scene that feels very gratuitous and Heather Paige Cohn strips down for a sex scene, that while paying homage to horror classics, just feels like a reason to get her naked on camera. Interestingly there’s no male nudity here suggesting that the horror genre may have some way to go to address the clear sexism it revels in.

The cast is a mixed bag too. Most of the actors turn in decent performances, regardless of how underwritten their characters are. Sara Fletcher as Sophia and Bryce Draper as Michael are the standouts. The on/off relationship of their characters is exposed early on and they play off that well. Fletcher makes Sophia into a character you root for while Draper is dashingly handsome as the mysterious Michael. William Baldwin is a lot of fun as Mr. Walters, even if he does chew the scenery spectacularly, and Richard Grieco puts in a solid turn as Sheriff Wyatt. There’s something quite thrilling about seeing the screen legends together. Bill Moseley wheels out another creepy character and reinforces why he’s top of everyone’s list when casting oddballs and killers for horror movies.