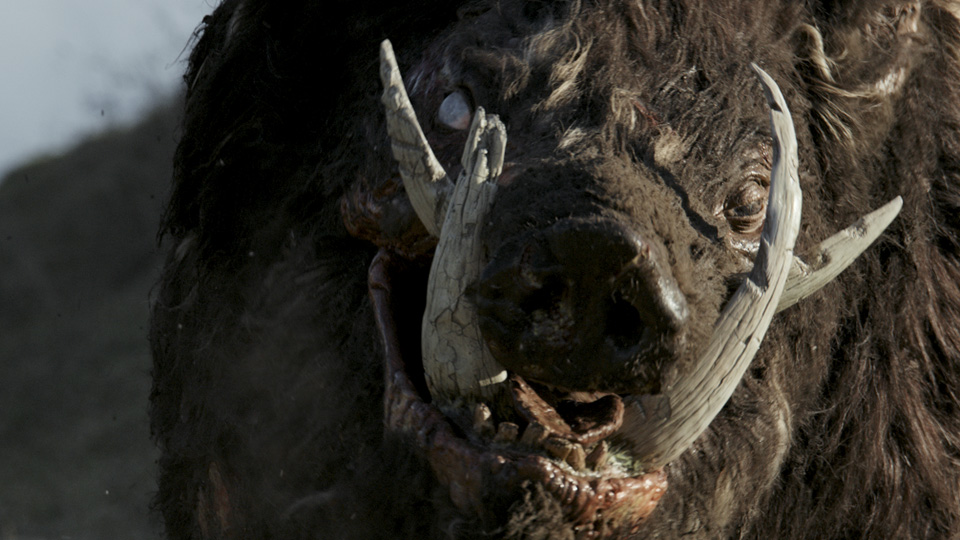 Debbie (Simone Buchanan) takes her family to visit her brother Bernie (Nathan Jones) in the Australian outback. Taking a trip out together, the family’s fun is cut short when they encounter a giant blood-thirsty boar that has been wreaking havoc and killing anything it comes across. When the boar sets its sights on the family, they have to work together to stay alive, out-wit the boar and attempt to kill it.

The latest effort from Australian film-maker Chris Sun, Boar is a creature feature that definitely delivers on the gore front. The premise is very simple and it doesn’t take long for the titular monster to make its entrance. I had really high hopes that Boar was going to be a silly but fun watch but ultimately, I was a little disappointed for a variety of reasons. Debbie and her family are introduced early on but they completely disappear for almost half of the film. That makes it very hard to care too much about them as we don’t get to spend a great deal of time in their company.

Instead the first half of the film follows Ken (John Jarratt) and cycles through a number of victims who add nothing other than a body count. It’s interesting to see Jarrett play against type as I’m used to him terrifying me as Mick Taylor in the Wolf Creek franchise. Ken’s daughter Sasha (Melissa Tkatuz) runs the local bar but she, like Ken, isn’t really integrated into the main story. There are too many disconnected scenes before the main meat of the story finally kicks in.

The biggest problem the film has is with the boar itself, which appears as a practical effect and as CGI. The two different approaches don’t work all that well together and as much as I wanted to believe the practical effect, it just didn’t look very real. Its motion is also incredibly limited so the boar is reduced to moving its head and opening and closing its mouth while standing completely still. Then it switches to CGI and it’s just very jarring as it looks very different to the practical effect.

The cast is a real mixed bag. Jarratt is reliably entertaining as is genre favourite Bill Moseley, although both are under-used. Hugh Sheridan makes an impression as arrogant Robert, the boyfriend of Debbie’s daughter Ella (Christie-Lee Britten) and Simone Buchanan brings a bit of weight to the performances too. Unfortunately Australian strongman Nathan Jones is pretty terrible, which is problematic as he gets a fair amount of screentime.

I so desperately wanted to love Boar but sadly it was an underwhelming and muddled film. From the lack of a cohesive story through to the disappointing boar itself, the film was more unintentionally funny than I think it set out to be. Had the film focused on the family and fleshed them out more, ditched the surplus characters and stuck with CGI for the boar, it could have been so much better.