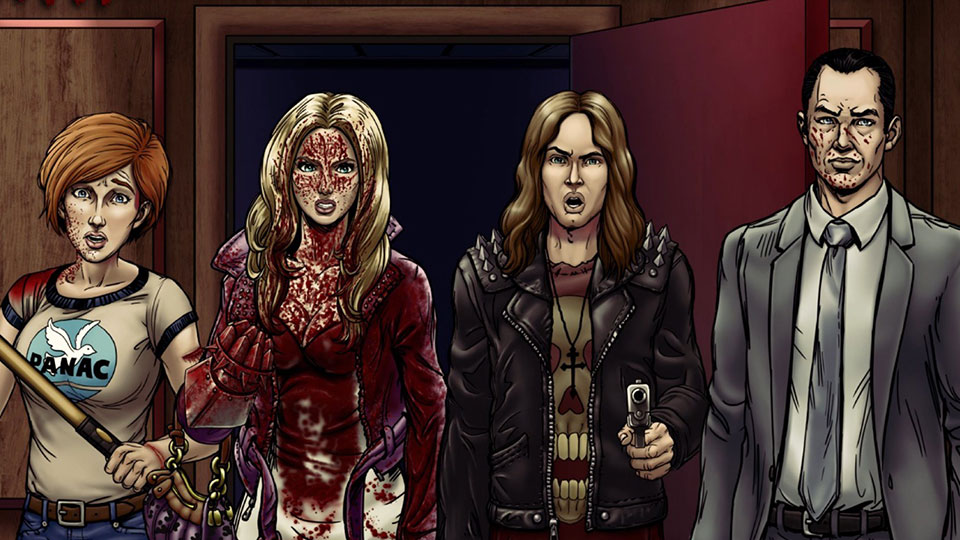 Miriam DeKalb (Dani Lennon) is lured to see her estranged and evil father Cyrus (Ray Wise) along with her siblings Collin (Benjamin Siemon), Kelsy (Florence Hartigan) and Ethan (Damien C. Haas). When the four siblings arrive at their father’s office, they discover that he plans to get revenge on them for betraying him years only and Miriam emerges as the only survivor. Devastated by what happened, Miriam is visited by a woman known as the Gamemaster (Morena Baccarin), who offers her the chance to relive the scenario again so she can save her siblings. What she doesn’t realise is that agreeing to it comes with a cost as she and her family are plunged into a twisted game.

To Your Last Death is a 2D animated horror film and it’s one of the most unique films from this year’s Arrow Video FrightFest line-up. Gorgeously animated, the film has a really strong and striking look that immediately grabs your attention and keeps you interested. The premise, while perhaps not wholly original, is solid enough and hearing William Shatner as the narrator aka The Overseer is the kind of hook that genre fans will lap up.

The film jumps straight into the story and it’s quickly established that Miriam is the character whose journey you’ll be following. Like her siblings, she’s messed up thanks to her power hungry and evil father and the issues that have arisen between each member of the family are drawn out over the course of the film. The first visit to Cyrus’ office, which sets the plot in motion is well done and if the Groundhog Day like story is the kind you enjoy, you’ll love this film.

Where To Your Last Death succeeds is in how creative and inventive it is. There is plenty of blood and gore, and parts of it definitely made me think of an animated instalment of Saw. As Miriam battles to save her brothers and sister, they are all put into twisted games where they have to do horrendous things to stay alive. I won’t say any more than that so I don’t spoil anything for you.

The voice cast is pretty star-studded with Morena Baccarin as the shapeshifting Gamemaster, William Shatner as The Overseer and genre favourites Bill Moseley and Ray Wise as Pavel and Cyrus DeKalb respectively. Dani Lennon, who voices Miriam, does a really good job and she definitely has the most work to do over the films 91 minutes.

To Your Last Death is one of those films that people will either love or loathe. The plot gets a little unnecessarily messy towards the end and I actually feel the film would have been a little tighter had around 15 minutes been shaved off. Overall though it’s an ambitious and visually impressive piece of work, that delivers horror in a way I’ve not seen on the big screen before. With the potential for the film to spawn a franchise, To Your Last Death will get people talking and it’s definitely different to everything else at this year’s festival.