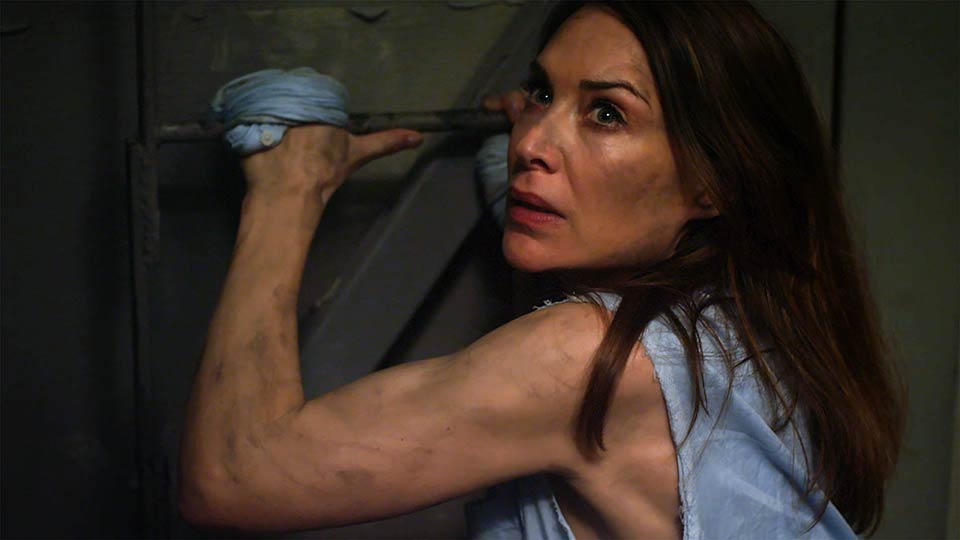 Structural engineer Brianna Bronson (Claire Forlani) is on the verge of divorce as her husband Tom (Jamie Bamber) believes she is having an affair. Pleading her innocence, Claire reluctantly goes along with Tom’s wishes for a divorce and they agree to a meeting with their lawyers. Arriving at the skyscraper, they head to the offices on the 60th floor but while they’re there, their children Ben (Isaac Rouse) and Anne (Riley Jackson) find proof that Claire hasn’t been cheating and they make their way to the building. Ben and Anne get stuck in a lift trying to get to their parents as a fire breaks out trapping Claire and Tom on the top floor, unaware that their children are trying to get to them.

With Dwayne Johnson’s blockbuster Skyscraper due in cinemas over the summer, it’s no surprise that High Octane Pictures have decided to release this similarly themed movie. Inferno: Skyscraper Escape aims to be a popcorn flick that whizzes by at a breezy 97 minutes and in part it manages to do that. The movie is fairly laboured in the first half hour as the set-up is explained and you learn that the building the central characters will be trapped in has been built on the cheap by some dodgy business people who have cut far too many corners.

Once you get past that, and some seriously bad acting (so bad I reckon I could do better and I know how bad I am), Inferno: Skyscraper Escape does begin to pick up. The film is at its strongest when the focus is on the core family and once the stakes kick in with Brianna and Tom realising their children are trapped in the building, it all becomes very entertaining. Forlani and Bamber easily give the best performances here and they commit to the material, even though you know they probably would have tightened the script themselves if they could have. They are believable as a couple and it was actually a joy to watch them spark off one another throughout the movie.

The film does sadly fall down in a fair few places. Firstly, the supporting cast ranges from adequate to horrendous, the script could have done with a lot more work before it was deemed fit for production, and there’s a sub-plot that just doesn’t work as the audience simply don’t care for the characters involved. Secondly, Inferno: Skyscraper Escape wastes too much time not focussing on the core four characters and that’s a real shame. The plot involving the shady businessmen comes to an abrupt conclusion but the story could have worked just as well without them. Lastly there are some clunky bits of narrative such as seeing Brianna rock climbing at the beginning so it makes sense when she decides to (stupidly?) clamber down a lift shaft later on.

Inferno: Skyscraper Escape isn’t without its charm. I was actually impressed with the production values and the special effects given that it was shot on a reasonably low budget. Forlani and Bamber are always watchable and even when they’re having to spout trite dialogue, I still cared about what happened to their characters. Is Inferno: Skyscraper Escape going to give Dwayne Johnson’s Skyscraper a run for its money? Of course it’s not but that doesn’t stop it from being an enjoyable, if deeply flawed, guilty pleasure.