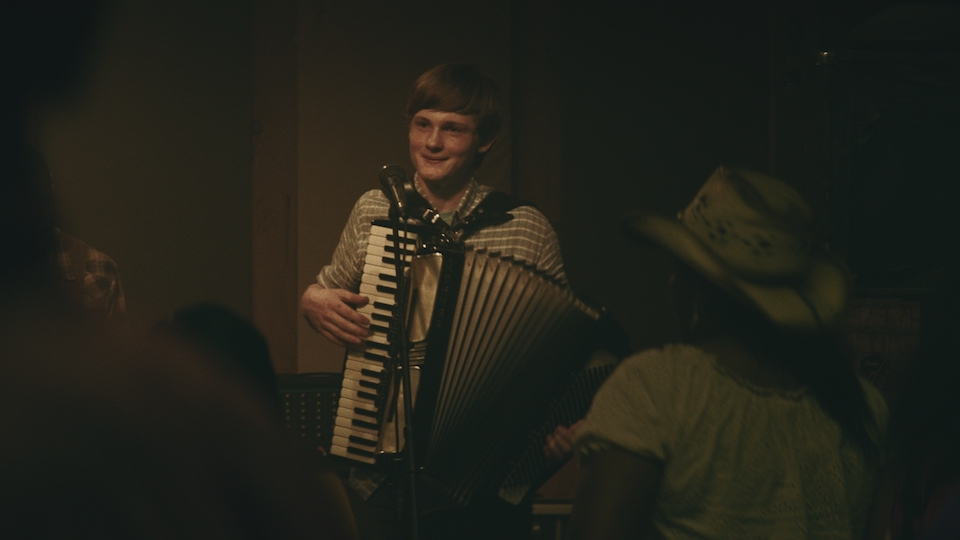 I remember when this film was in the early stages of development at Creative Scotland (or Scottish Screen as it was then known) around ten years ago. I was told the story of the film back then, and it has stuck with me ever since. To see that it has finally made it to the screen is both wonderful, and also a prime example of the brutal challenges filmmakers face trying to get anything made in this country.

Directed by Kenny Glenaan and written by Man Booker Prize winning author James Kelman, Dirt Road to Lafayette tells the story of Scottish teenager Murdo (Neil Sutcliffe) and his father Tom (David O’Hara) who travel to the deep south of America to stay with relatives following the death of his mother. Murdo is a gifted musician, but hasn’t played since her death.

After they miss a connecting bus, they have to spend a night in Allentown, Mississippi. It is here that Murdo meets the legendary Cajun blues musician Queen Monzee-ay (Margo Moorer). She plays the accordion, just like he used to, and encourages him to join in with her. He plays traditional celtic folk music to her, and she plays Zydeco Creole music. Soon they are blending these different musical styles together, and for the first time in a long time, Murdo is happy.

The music reawakens something in Murdo that he thought was lost, and it drives him to rebel against his father. He hits the road on his own to seek out Queen Monzee-ay at a festival in Lafayette, so that he may play music with her again. Some may argue that nothing much happens in the film, but there’s plenty of drama here, it just happens to occur off screen. The illness and then death of both Murdo’s sister and mother. The grief that drives them to abandon Scotland and journey to America. The pain they share and can barely speak of, and the music that helps them to heal. It’s all there, between the notes.

As for the music itself, it is the kind that stirs your soul and brings tears to your eyes. Kelman’s prose is spare, and Glenaan doesn’t romanticise the landscape. He shoots the film in a very matter of fact way. The poetry of Dirt Road to Lafayette is in the music. Full of history and storytelling, it is the language that connects us all, across cultures and generations.

In his first acting role, Neil Sutcliffe impresses as Murdo. He’s clearly not a natural actor, and I suspect he was cast for his ability as a musician, but I found his awkward and reserved performance very moving. As for David O’Hara, never has an actor been more suited to a role, than he is to Tom. He is the quintessential dour Scot. Stoic, unemotional, and vibrating with barely concealed anger. And why wouldn’t he be, after the hand that life has dealt him.

Dirt Road to Lafayette is one of the best films I have seen at this year’s Edinburgh Film Festival. A simple story about the pain and division that life can bring us, and the power of music to heal and unite.