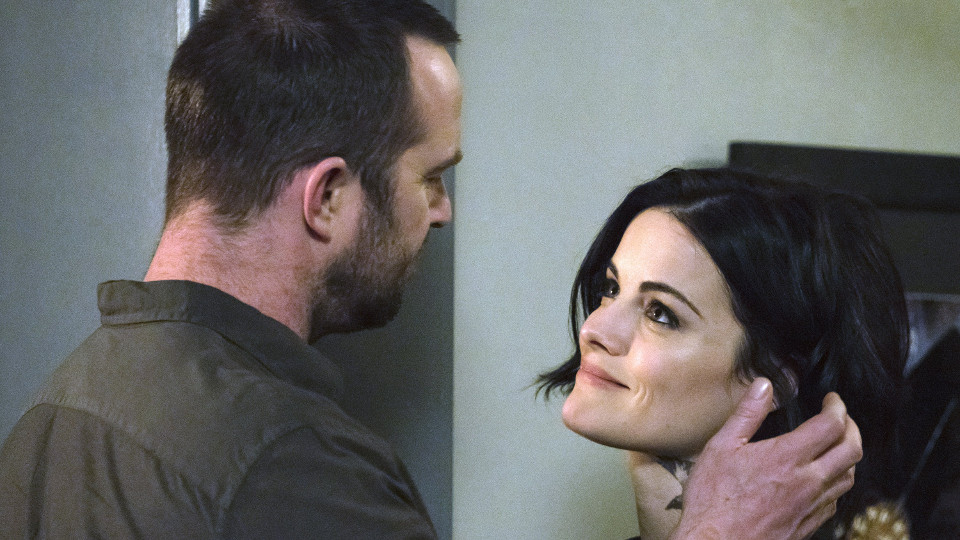 In the season finale of Blindspot season 3, Roman (Luke Mitchell) headed back to where everything began for Jane (Jaimie Alexander) and himself.

The episode opened up with Roman sat in the sun overlooking Cape Town. He was talking on the phone and it sounded like something had happened. Blindspot loves a cryptic opener and we had to wait until later in the episode to see what he was talking about.

The action jumped back a little to the morning after Reade (Rob Brown) and Zapata (Audrey Esparza) spent their first night together. Zapata awoke to find Reade getting ready to head into the office. He seemed really happy but her emotions were tougher to gauge. Things were a touch awkward because Reade had info on a new tattoo break but he couldn’t talk to Zapata about it. He wanted her back on the team to at least finish what they started but she refused. She said she’d be in later to sign her release forms.

At the FBI, Rich (Ennis Esmer) and Patterson (Ashley Johnson) had been watching Roman’s video. They worked out that he was quoting The Count of Monte Cristo but had added three words. After some hilarious confusion between the team, Patterson worked out that the words pointed to a website. Visiting that website revealed a map of the world divided up into a 3m x 3m grid.

A set of three words pointed at a specific square in the grid. Rich had uncovered a clue that he thought would give them the location but there was a problem. To decipher it he needed an original print edition of The Count of Monte Cristo. He had been able to locate one on the dark web but didn’t think he’d be allowed to get it due to it costing an insane amount of money. Reade wasn’t aware of the cost and told him to just get on with it so Rich did.

Meanwhile, Crawford (David Morse), was advised to flee because the FBI were closing in. He explained that he didn’t run and was hellbent on tracking Roman down. A phone call to Roman was enough to locate him. Crawford headed out to Cape Town on a friend’s jet. He used Blake (Tori Anderson) as bait to keep the FBI busy while he got away. During this mission, Jane collapsed and tried to keep it hidden from the team.

Back at the FBI, Weller (Sullivan Stapleton) wondered if they could get Blake to flip on Roman. However, Jane knew that Roman was pretending to be Tom Jakeman and that he’d falled in love with Blake. Instead they decided to use that relationship to get Blake to give up the details of what her father was up to.

Rich obtained the book and then worked out that the location Roman was pointing them at was in Cape Town. This was the same place that Blake said her father was. The team headed off to investigate, leaving Patterson and a moaning Rich behind. On the way, Jane told Weller that she had collapsed and thought she was pregnant. Weller was over the moon at the thought of starting a family together.

Blake warned her father that the FBI knew where he had gone. While on the phone, Roman burst in and tranquilised him. When Crawford awoke, Roman had taken him to the orphanage where he and Jane had grown up. It turned out that Crawford was the one who built the orphanage and Roman and Jane were part of a trial program to build his army. They had been subjected to horrible abuse and Roman was angry.

Roman planned to kill Crawford but wanted him to confess first. Crawford came straight out with it and Roman was thankful for his honesty. Before he could kill Crawford the FBI team arrived. Crawford managed to talk Roman into leaving him alive to keep the FBI busy to allow Roman to flee.

Weller took a bullet that passed straight through him, knocking him out of action. Jane found Crawford and ended up killing him with several bullets. Outside she saw Roman getting away and tried to give chase. Roman called Blake as he fled and arranged a location to meet after hearing she was also in Cape Town.

In the season three finale, Jane and Weller hunt Roman back to where it all started. Can they finally stop him?

Roman met Blake on a hill overlooking Cape Town. He was ready to tell her everything and told her the news that her father was dead. She took him by surprise and called him Roman instead of Tom. Before he realised, she shot him in the stomach and then left him to die. He made a mysterious phone call to tell someone that he was leaving them everything.

Before he passed away, Jane arrived and shared an emotional moment with her brother. He told her that he was afraid of dying and not ready to go. She told him it was a beautiful spot to die and promised she’d see him again. Jane sobbed as Roman died in her arms.

Roman dying was a twist that we expected but Blindspot wasn’t done yet. Before he died he passed a thumbdrive to Jane. Back at the FBI, Rich and Patterson couldn’t crack it and they only had one chance to access the information. Jane guessed at the password and was correct. The drive contained a wealth of information about the tattoo’s and also had some partial medical data. The rest was hidden around the world on more drives.

Elsewhere, aboard a private jet, Blake looked to be taking over the family business and continuing what her father had started. She was talking to someone and as the camera panned it was revealed that her companion was Zapata!

Back with Weller and Jane, he had been patched up and seemed ok. Suddenly Jane collapsed and had to be taken to hospital. Weller went with her and then got called back to the office. Patterson explained that Jane wasn’t pregnant and was suffering from ZIP poisoning. They hoped that they could build on Roman’s research and clues to help her recover. Weller suddenly didn’t look too good.

At the hospital, Jane awoke and looked confused. She opened her bag and saw her FBI badge with the name Jane Doe. Next she made a call to someone called Hobbes, said she was Remi and asked to speak with Oscar, Roman or Shepherd. She said she had a lot of missing time and might have been compromised but was still undercover at the FBI.

At the end of the episode, Jane was then informed that her husband, Weller, had been brought in. His gunshot wound was worse than first thought and he had internal injuries. Jane walked into his room to be greeted by Patterson, Rich and Reade. She didn’t seem to know any of them but kept that quiet. As she sat by Weller’s bed, surrounded by the team, an evil grin crept across her face. Looks like Remi is back!

It has been confirmed that Blindspot will return for a fourth season. We’ve already got some ideas of what we want to see from Blindspot season 4, you can read about the 10 things we want to see to find out our predictions.