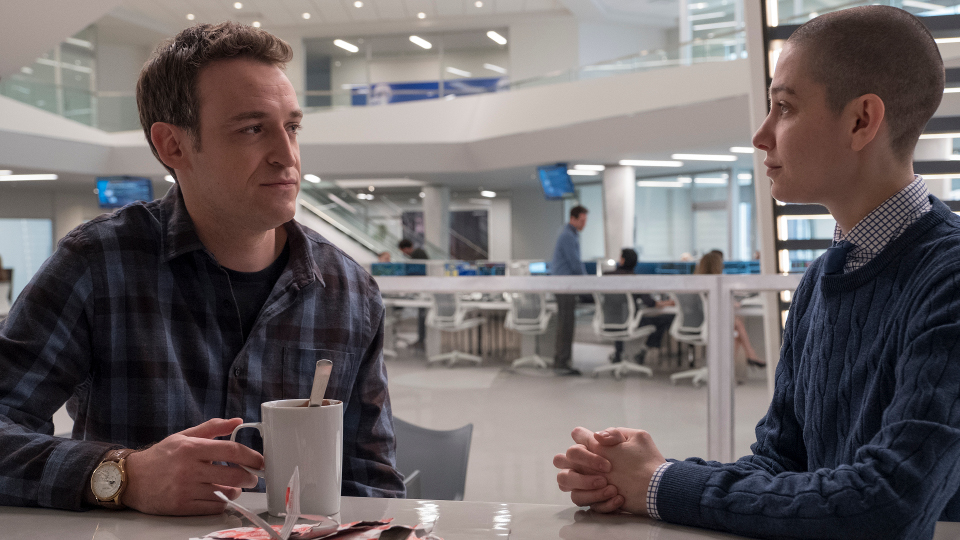 The episode opened up with Axe and Wags (David Costabile) sat at a table with napkins on their heads. It wasn’t immediately clear what they were up to but the episode came back to this scene later on. When they thought Axe going to prison was inevitable, Wags arranged for them to eat a French delicacy of an Ortolan as a treat.

At Axe Capital, Axe held an emergency meeting with Bach (Glenn Fleschler) and his fixers John (Brian Wiles) and Timmy (Tom Lipinski) to try and work out if Connerty had anything on him before his court appearance. Bach was feeling confident but Axe was worried as he failed to retrieve the evidence against him last episode.

Meanwhile, Chuck was arranging payment for someone to plant the evidence in Axe’s apartment. They agreed to do it while Axe was out of town but the court hearing changed the plan. At the hearing, Connerty had no evidence to present against Axe and was given a week extension to come up with something. The guy who was going to plant the evidence wanted double the fee but then pulled out saying it was impossible.

Chuck approached Spyros (Stephen Kunken) to see if he would help him out. Spyros refused to help Chuck and then tried to take matters into his own hands. To impress Axe he did some of his own digging and uncovered Wendy’s (Maggie Siff) Ice Juice short. With the help of an NSA friend he had the evidence he needed against Wendy. He then took the evidence and gave it to Connerty.

When he told Axe his plan he was feeling pleased with himself and was expecting to be the hero of the day. Instead he had the wrath of Axe and Wags because Axe cares too much for Wendy to use her to save himself. Axe was furious and devastated by what Sypros had done and then had the horrible task of telling Wendy that she could be facing prison.

Axe offered to help her and pay whatever fees were needed. He even considered taking a plea deal to save her but was talked out of it by Bach and Lara (Malin Akerman). He hadn’t considered what affect going to prison would have had on his boys.

Out of luck against Axe, Connerty was on a mission and went after Wendy and Chuck. He wanted them to testify against Axe which would put Chuck in prison but leave Wendy with their kids. Wendy later sought advice from Black Jack Foley (David Strathairn). She wanted to know how he handled impossible situations and he gave her some sage advice. Meanwhile, Chuck paid a visit to his father (Jeffrey DeMunn) to apologise and update him. His father gave him some advice too.

Elsewhere in the episode, Taylor (Asia Kate Dillon) had their quants working on perfecting their algorithm. Flowers arrived for them and Mafee and Dollar Bill (Kelly AuCoin) wondered who they were from. They were Delphiniums and of course from Oscar Langstraat (Mike Birbiglia).

Taylor and Oscar had a Skype call and discussed the algorithm. Later, Oscar flew in unannounced to support Taylor. He brought snacks and his laptop then they went back to Taylor’s for a late night coding session.

At the end of the episode, Wendy made separate calls to Chuck and Axe and had them meet her. Without the other knowing she was setting up a meeting between them at Axe’s apartment. After the usual sparring between them, Wendy told them off and had them sit at a table. She said the only way they could survive was to work together to sort the mess out.

She told them both to lay everything on the table. Chuck asked to be excused first to use the bathroom. There he considered planting the evidence and then returned to the table. He hadn’t gone through with it and gave it up. We’ll have to wait for the next episode to see what plan they come up with.

Watch the Billions 3×07 trailer below:

The official synopsis for Billions 3×07 reads:

Axe and Chuck face evidence of their Ice Juice involvement.