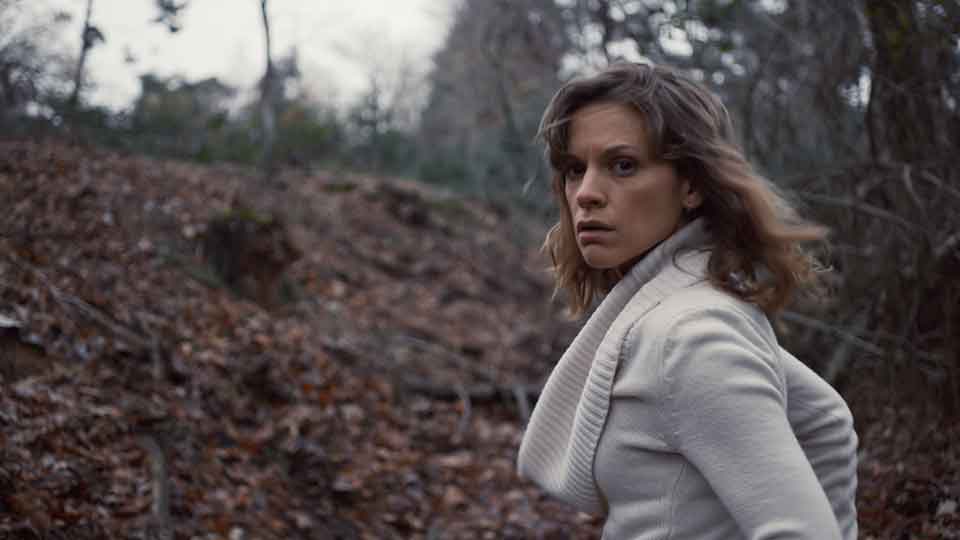 In The Team (2015), Veerle Baetens plays a harassed detective working alongside German and Danish colleagues tracking an organised crime syndicate across Europe. In Cordon (2014) she plays a harassed teacher trapped by a virus outbreak. And in Tabula Rasa, the latest Walter Presents series to grip our interest, she plays the harassed Mum struggling with amnesia. Fair to say, there’s a lot of harassment in her acting life. Thankfully, in person, Veerle is anything but. Petite, charming and great fun, Veerle is relaxed and chilled as we sit in a Soho club on a warm spring day.

Despite studying musical theatre in her youth, and fronting her own electro-pop band, Dallas, Veerle found that it was acting that allowed her to develop character: “It’s all about composition – it’s all about symphony. Acting allowed me to be someone I’m not”, she says. So, she’s an actor who sings, rather than a singing actor? “I wasn’t the best singer at school; and I’m still not the best. I’m not a musical singer; if people like my voice, that’s good – but I have a little voice.”

It was Sara (2007) that was really her breakthrough role – the Flemish version of Ugly Betty. “It was a Columbian telenovela, Yo Soy Betty La Fea, which travelled to Argentina, Greece, Germany – lots of places. The Flemish version did really well; but for some reason the south Belgian version not so well.” She explains that Belgium is basically split into two countries for many things because of the Flemish/French-speaking divide. “We share fries, we share beer, we share Brussels – but so many things are different. It’s sad, but it is what it is. But I’m finding now that I’m doing more French-speaking roles, and a whole new world is opening up for me – in Belgium!”
The Broken Circle Breakdown (2012) really propelled her career on to a global stage, winning numerous awards (Veerle won Best European Actress and the European Film Awards and Best Actress in a Narrative Feature at Tribeca Film Awards). It’s a dark tale of a couple coming to terms with the loss of their child – but with bluegrass music as its backdrop: “The music is a metaphor for the movie. I hated bluegrass before I took the part; but I grew to love it. It’s got a spiritual message that I didn’t get at first. And the music in the film is the same; it’s not obvious, but there’s joy in there. And I think that’s why it succeeded so well.”

The Team (2015) was a joint production between three European TV companies: “It was complicated to shoot. Not only because of the language, but also the culture. Techniques are the same, but the logistics were difficult – moving stuff about to the mountains. But it was a good European feeling.”

And so to Tabula Rasa – Veerle’s latest work which recently launched on Channel 4’s excellent Walter Presents platform, and something she’s co-created as well as acted in. How did she cope with the different roles? “It’s a nice change of energy. As an actor, you’re always out there with people all day. But with writing, you’re on your own, locked away with your thoughts. I enjoy the combination of being able to do both – but the acting is better paid,” she adds with a laugh.

Mie, the character she plays in Tabula Rasa, suffers with memory loss. We see her in the opening episode in a hospital ward, trying to understand how she got there. Meanwhile a police officer is questioning her about a missing person. “I wanted to play someone who had difficulties standing straight in the real world, and who had to move into a protected environment to find out some things about herself. The idea of amnesia came from (her co-writer) Malin. But screen writing was fun – it’s like ping-pong. Bouncing words back and forth. The guys I’ve written with are so good at it. It’s about using the right amount of words – getting the balance right and not having too much going on. It’s not like a book – it has to be focussed and tight. They were constantly saying to me – cut it down, cut it down.”

She was clearly a quick learner – Tabula Rasa is a hugely engaging show, with excellent characterisation at its core. “I like detail – I’ve started painting again and I spend ages on one tiny section. You can do this with being an actor – but you can’t do that with writing. You have to be aware of the bigger picture”.

Playing such a complex character must’ve been challenging and harrowing at times. “We did a lot of research – I met a lot of people who suffer with similar conditions. They have things to help them – clocks, reminders – to help with the isolation.” I comment on Mie’s husband in the series, and how he – in the opening episode, at least – helps Mie on a daily basis with practical solutions to her condition. “Mie’s happy she has him to look after her,” she says – “but imagine having to live with – and love – someone who has that condition all the time?”

Veerle is working on a new film project that she’s very excited about. She was able to focus on writing it when she forced to rest whilst recovering from a broken foot (“I jumped out of a tree!”). And she has two films due out later this year – Duelles, a psychological thriller set in the 1960s – and A Bluebird In My Heart. But she hasn’t seen either production yet, even though they were both shot a year ago. “I’m really looking forward to seeing them – finally!” she says.

Thankfully, we will be able to see her more immediately, thanks to Walter Presents.

Tabula Rasa is available now on All4 and is a gripping thriller with a spooky twist. Do yourself a favour and check it out.