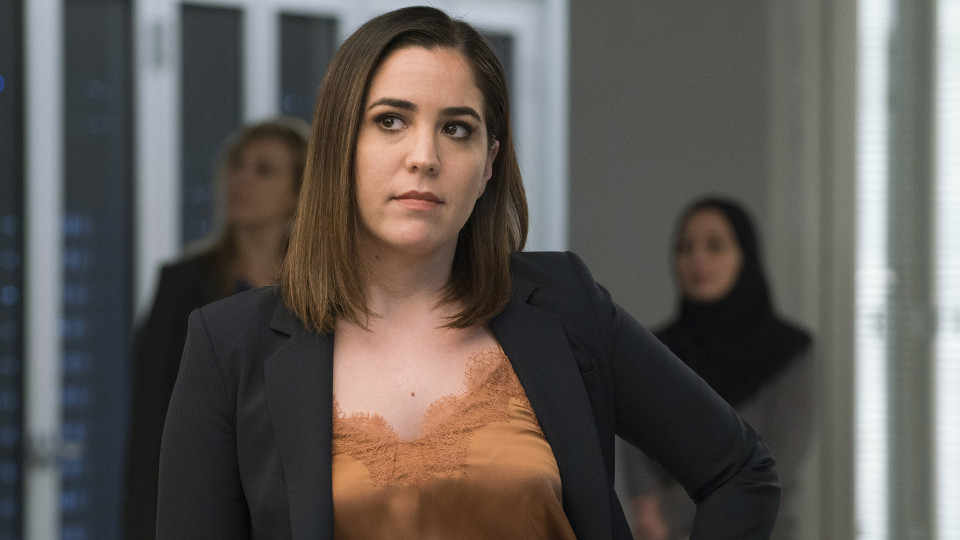 In the latest episode of Blindspot season 3, Roman (Luke Mitchell) got to work on a Plan B for Crawford (David Morse).

The episode opened up with Kira (Gloria Reuben) confronting Roman after the sonic weapon was destroyed. He explained he had a Plan B and not much time to pull it off. He requested that she leave him alone to get on with things.

During the episode, while he prepared whatever it was he was working on, he began to see visions. First of his sister Jane (Jaimie Alexander) and then of a different version of himself. He seemed to be really suffering from his past trauma which is getting worse. He tried to ignore it but his visions suggested he tell his sister.

Avery (Kristina Reyes) was now living with Jane and Weller (Sullivan Stapleton). Jane woke up to find Avery missing and went into immediate panic mode. Avery had just nipped to the shops to get them breakfast but Jane lost it.

The body of Avery’s father finally washed up. It was full of bullet holes so the team presumed he’d been dumped. The body had obviously been in the water for a while and they wondered if it was a final clue from Roman. They couldn’t work on anything else because the tattoo database was still overwhelmed.

At the autopsy of the body, they discovered that the body had been frozen before being dumped. They also found a UV tattoo of a skull on his neck. It matched one of Jane’s tattoos and when Patterson (Ashley Johnson) combined them they made the name Charon. Weller knew the name to be that of a famous contract killer and the team wondered if he was hired by Crawford to kill Avery’s father.

The tattoos also had the blueprint for a key as their eyes. Patterson looked inside the body and found the key in his throat, behind the tattoo. The key opened a lock box at a law school and inside was a hidden camera to watch who opened it. They presumed Charon used it to vet who was paying him.

Patterson needed to identify where the camera had broadcast to as well as fix the tattoo database. She told Weller that it was built on her father’s algorithms and he suggested bringing her father in. She reluctantly did so and it turns out her father was Bill Nye the Science Guy. Weller was a big fan and a little star struck.

Bill got to work on the database and helped Patterson by distracting her. A technique he had found helped her focus. He almost called her by her unknown first name but she cut him off. It sounded like it began with a “W” but we’re still guessing.

Patterson found that the camera was broadcasting to a comic book store. The team raided the store but Charon was quick to escape. Jane gave pursuit and ended up in a knife fight. She had to turn it on him to save herself and he died.

Just when it seemed their final lead had gone cold, Weller worked out that Charon was getting paid in rare comics. After obtaining a list of them, Patterson worked on finding out who the previous owners were.

Avery took a call from her Godmother Lynette Belmont (Jennifer Esposito) who explained that her father had left her a sizeable estate. She needed to go and sign some papers so Jane went with her.

It was a trap and Lynette was an employee of Crawford digging for information. Avery and Jane escaped to a panic room where they tried to wait for help to arrive. When Weller and the team did arrive, Lynette tried to keep them out by saying she had Jane and Avery at gunpoint. She wanted safe passage out of the country.

Weller was cautious thinking that Jane was in danger. Inside, Jane mixed some chemicals and managed to make red smoke which she sent out the air vents. Weller saw it and knew it was a signal to storm the building. Avery ended up pulling a gun on Lynette but Jane talked her down.

Elsewhere in the episode, Megan (Reshma Shetty) returned from her latest media assignment. She was keen to get on with planning the wedding with Reade (Rob Brown). He was obviously still torn from what Zapata told him but he’d kept it from Megan.

Megan later bumped into Zapata and found out that she wasn’t going to the wedding. Megan was annoyed because Zapata (Audrey Esparza) was supposed to be Reade’s best man. That’s when she realised something was up and confronted Reade about it.

He explained that Zapata had admitted that she had feelings for him. Megan realised that Reade had also had feelings for Zapata. Megan decided it was best to call the wedding off and leave. She decided to focus on her story and come out as undocumented. Could this mean Reade and Zapata could finally be on in the near future?

At the end of the episode, it was revealed that Crawford plans to attack several New York landmarks. Will the team be able to stop him?

Read our preview of Blindspot 3×21 Defection.