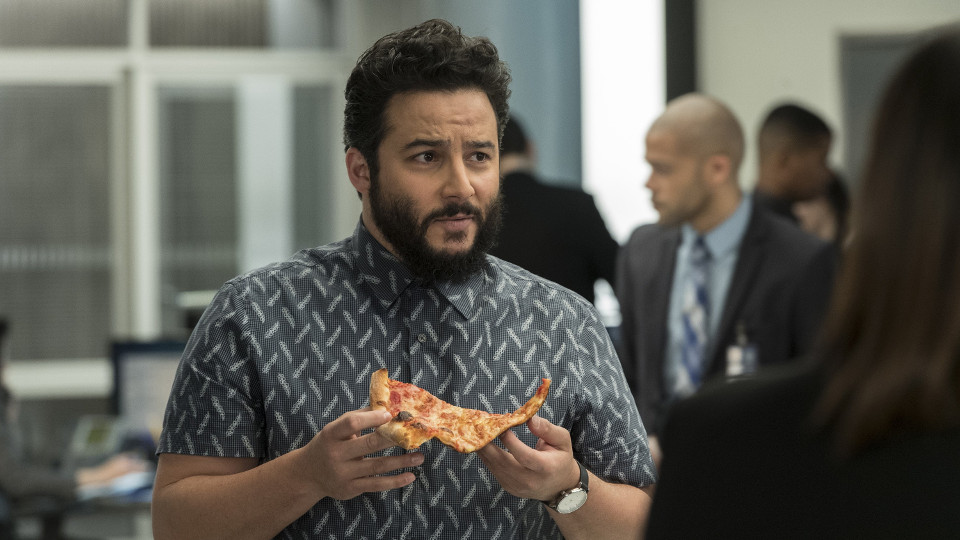 In the latest episode of Blindspot season 3, the FBI team found their lives under threat.

The episode opened up right where the previous one left us, with Roman (Luke Mitchell) carrying out the orders of Hank Crawford (David Morse) and ordering the assassinations of Reade (Rob Brown), Zapata (Audrey Esparza), Patterson (Ashley Johnson), Weller (Sullivan Stapleton) and his sister Jane (Jaimie Alexander).

At the FBI, Reade held a meeting and Patterson briefed the team with the likely location of Crawford. The team were struggling to find anything concrete and Reade decided they should head home and grab some rest. The episode took this starting point and then followed each character separately as Roman’s assassin’s closed in.

Rich (Ennis Esmer) suggested that Weller and Jane go out for a meal for a change. They weren’t all that keen on the idea but Rich hacked an exclusive restaurant and used Weller’s credit card to make the booking. With seemingly no choice they decided to go with it.

At the restaurant the pair ordered food and tried some cocktails. They struggled to leave work behind and while Weller took note of all the exits, Jane noticed a woman acting suspiciously. She was sure that she had seen her near their apartment earlier in the day too. As she got up to leave, they decided to corner her to find out what she was up to.

Jane went out the back and heard a gunshot inside. Worried it might be Weller in trouble she tried to get back in but found the door locked. As she turned around she was set upon by Roman’s assassins who tasered her and put her in a white van. Inside Roman appeared via video call and told Jane that her friends were all going to die.

The episode jumped back to the FBI meeting and this time followed Reade. Millicent (Lauren Stamile) had started her investigation into him and his connections with Hirst. He felt Millicent was a distraction to the team and wanted to talk with her direct but she said she would when she was ready.

Outside, Reade and Millicent hailed the same cab so agreed to share the ride. They began to argue so she got out. However, she left her purse and keys inside and ended up at Reade’s apartment for help. While she was using his bathroom she was murdered by a waiting assassin who was coming for Reade. He heard the commotion but was too late and almost got stabbed himself. He managed to fight the attacker off who then got stabbed with his own knife and died. A call came in to tell him Zapata was also in trouble.

Zapata left the office to attend a memorial service for a former boyfriend of hers called Ricky. There she spoke to Ricky’s sister, Alexis (Coral Peña), and it appeared they got on well. Alexis was a newly graduated police officer. After giving an emotional speech, Zapata stayed after the service with Alexis. They soon came under fire from a balcony and Zapata got Alexis to cover. After placing a distress call, Zapata decided to distract the attacker while Alexis moved below the balcony and killed him.

Next up was Patterson who was going on a first date with Jack Izenberg (Bryce Pinkham). The pair found they were quite similar but their date was rather disastrous. They too came under fire and Patterson took the lead to keep Jack safe. He was surprised she brought her gun on their date and Patterson used it to return fire. Patterson used the gas supply of an oven and Jack’s vape pen to create a makeshift bomb and injured the attacker. As it exploded Zapata arrived and rushed inside, just in time to kill the attacker and save Patterson.

Finally we found out what happened to Weller. He was also attacked by an assassin who tried to inject him with cyanide. Weller put up a good fight, took the cyanide injection and used it on his attacker. When he got outside Jane had already been abducted.

The team worked out how to locate Jane with a little help from Rich. He hacked the booking system of the restaurant again to find out the identity of a customer who was taking a selfie near the suspicious woman. He then found the Instagram account of the customer and found the selfie had a front view of the woman’s face. A little facial recognition revealed her many aliases and was just the clue they needed to track her down.

Meanwhile, Jane spoke to Roman and he told her that he’d keep her alive to see all her friends die. She couldn’t believe he’d completely changed his plans and was surprised when Roman said he’d found a new family. Jane noticed the video feed was rigged to the van’s power. She broke out of her restraints and smashed the monitor and power system. The van stopped and Jane fought the two assassin’s. It looked like things were going well but one of them pulled a gun. Fortunately Weller and the team arrived and killed the attacker first to save Jane.

At the end of the episode, Weller warned the team that they needed to be extra cautious until they had taken down Roman and Crawford. Rich had stolen Millicent’s report into Reade and shredded it. Roman was gearing up to kill the team himself but was told to focus on Crawford’s plan by Kira (Gloria Reuben).

Read our preview of Blindspot 3×19 Galaxy of Minds.