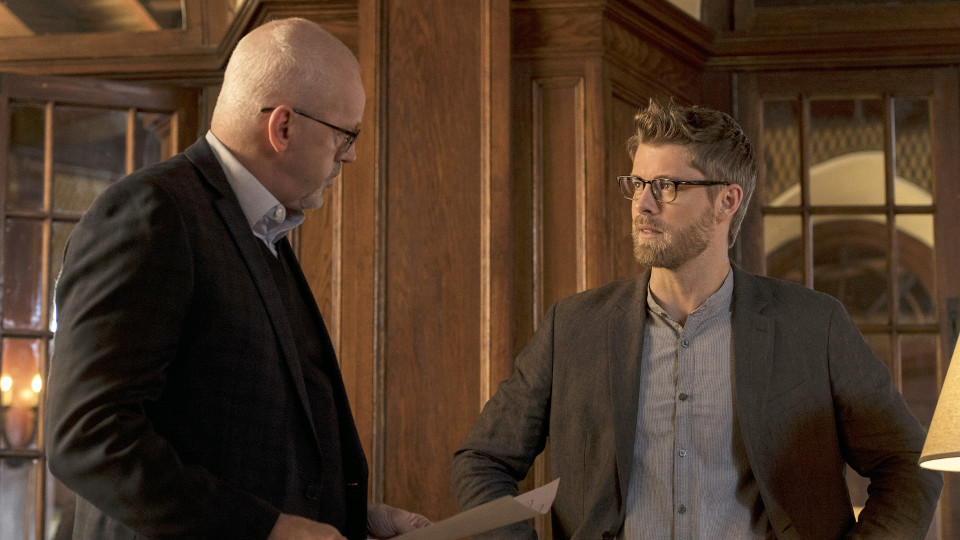 In the latest episode of Blindspot season 3, Zapata (Audrey Esparza) found herself in an awkward position with the FBI team.

The episode opened up with Dr. Borden (Ukweli Roach) helping keep an unknown man alive while he was tortured. They were interrogating him for information and using electrocution as the method of torture. Borden revealed he was no stranger to excruciating pain and showed off his scars.

At the FBI, Reade (Rob Brown) had the team in testing cakes ahead of his upcoming wedding to Meg. He found all the cakes too sweet apart from a banana one which the team hated.

Rich (Ennis Esmer) interrupted to show Patterson (Ashley Johnson) something. He’d apparently cracked the mysterious dragonfly tattoo which was the one Zapata and Keaton (Chad Donella) were trying to keep quiet.

Rich had uncovered some secret messages between two users in relation to the tattoo. Before Patterson could get to work on their identities, Zapata interrupted. She said she knew who the users were because she was one of them. The team were shocked but not as much as when she revealed that the other person was Borden and she’d been his CIA handler.

Zapata explained how Borden had survived the explosion and a flashback revealed the rest. Borden had spent days peeling burnt flesh off his body before fleeing the country. The CIA had tracked him down and wanted to put him to work as an asset. They had him infiltrate a group to take down a man responsible for genocide called Goren Gorovich (Demosthenes Chrysan). They offered Borden immunity for his co-operation. Patterson was understandably devastated.

Borden was back in New York and had apparently killed his new handler. They had footage of him on a security camera and decided to try and capture him. The team observed Borden’s next meet and realised his cover was blown when the men he was meeting tried to kill him. The team killed the men and Weller (Sullivan Stapleton) captured Borden.

They took him in for questioning and he was forthcoming with information. He explained how Goren had used him to keep those he tortured alive. Borden said he made sure his handler, who was captured, died quickly to keep his cover intact. He gave up a USB drive containing all of Goren’s documents. He knew an attack on Manhattan was planned for the next day. Borden begged to talk to Patterson but his request was denied.

Rich did his best to cheer Patterson up and while distracted she came up with the answer to solve an encrypted file. It gave the team the details they needed of the attack and revealed that Goren was planning to drop 20 bunker busters on Manhattan. Weller knew that was more than enough to level the city.

The team rushed to stop Goren and put a focus on hand-to-hand combat to avoid setting off the bombs. Weller and Reade found Goren who was holding a dead man’s trigger. Zapata and Jane (Jaimie Alexander) found the bombs were rigged with C4. They scrambled to make them safe and did so just before Goren tried to detonate them.

Meanwhile, Hank Crawford (David Morse) opened up to Roman (Luke Mitchell) about his plans. His land deal with Jean-Paul (Bruce Davison) was imminent. He needed as part of his ambitious vision for a world without war, policed by a huge peacekeeping force.

Roman has been having headaches and collapsed which landed him in hospital. Crawford said he was Roman’s father and had them run a whole load of tests. They uncovered signs of zip in his blood work and Roman explained that he was given it previously to treat PTSD. The whole situation brought Crawford and Roman closer together. Roman later sent a heavily encrypted text to the FBI explaining about an upcoming charity gala that Crawford would attend.

Elsewhere in the episode, Rich was under investigation and his FBI job was under review. The result was that Rich was going back to prison. However, the team stepped up to vouch for him and he was allowed to stay. The reviewer warned Reade that she would be investigating him next.

At the end of the episode, Patterson was able to move past being fearful of Borden. Zapata had his immunity deal pulled. Reade met Zapata for a drink and she revealed she loved him. He was shocked and a little upset she had waited so long to tell him. With his upcoming wedding he didn’t know what to say and walked out.

Read our preview of Blindspot 3×17 Mum’s the Word.