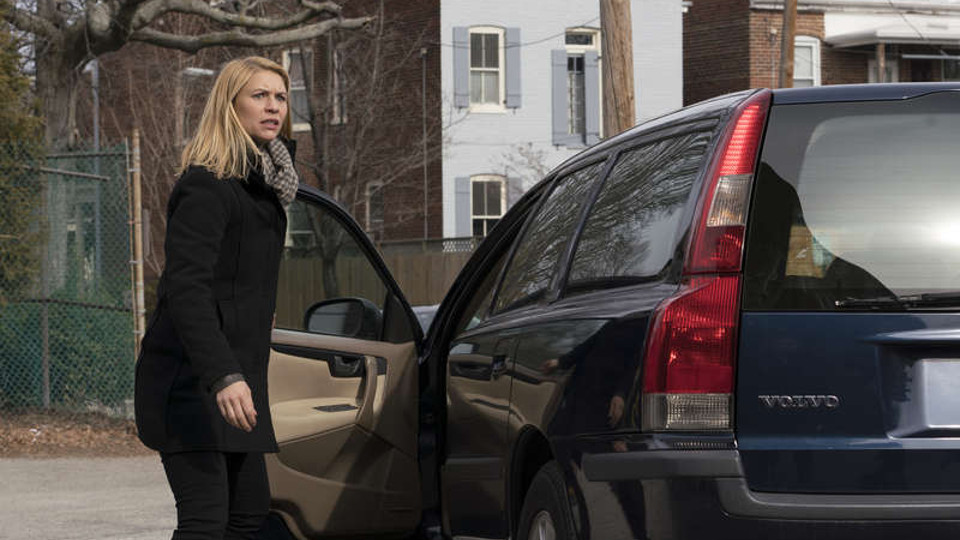 On the latest episode of Homeland, Saul (Mandy Patinkin) and Carrie (Claire Danes) interrogated a suspect.

The episode opened up, with Carrie dropping her daughter Franny off at school. She told her that she couldn’t talk about what happened the night before. Franny was obviously upset and ran to cling onto her favourite teacher.

After leaving Franny at school, Carrie called Saul and said she wanted to be in on the interrogation of Dante (Morgan Spector). Saul told her his location but wasn’t convinced about putting Carrie in with him. After Carrie pleaded he eventually gave in and watched via the monitor.

Knowing that Saul is watching, Dante’s tactic was to reveal everything he knew about Carrie. He said she was crazy, revealed that her meds weren’t working and that she was illegally buying drugs to cope.

Carrie responded with her accusations of how his travel lined up with that of Simone Martin (Sandrine Holt). She also accused him of treason but Dante wasn’t for talking. Carrie said it was pointless and left the room. Dante said he needed the loo so Carrie had him taken though the office knowing he would see the large amount of evidence the team had collected.

While in the interrogation, Carrie’s sister Maggie (Amy Hargreaves) had to pick Franny up from school. Franny had been crying all day because of the upset the night before. Carrie faced off with Maggie about the situation and Maggie gave her an ultimatum. Immediately check into hospital or expect a custody battle. Carrie began to argue but then just walked out.

Elsewhere in the episode, President Keane (Elizabeth Marvel) was pressured by Senator Paley (Dylan Baker) to resign. He said it was in the best interests of the country (not mentioning his own) that she go before Simone Martin could testify. Keane refused and agreed with David Wellington (Linus Roache) that they should put pressure on Russia.

Payley paid a visit to the safehouse where Martin was held. He sprung a surprise interrogation on her to see if she would crack. She didn’t and Payley left satisfied he was doing the right thing.

Meanwhile, Wellington put pressure on the Russian ambassador to stop Martin testifying by saying that the US would view it as a hostile act. He of course denied all Russian involvement and said Martin wasn’t one of theirs. However, it seems that Wellington had them worried and the ambassador later met face-to-face with Yevgeny (Costa Ronin).

Later, Yevgeny sent a team to the safehouse where Martin was being held. It looked like they were carrying out the wishes of Moscow and that they would assassinate her. Instead they extracted her and took her to Yevgeny. The pair embraced and shared a kiss when they were reunited. It seems that Keane and Wellington’s idea to pressure Russia has caused them a real problem.

At the end of the episode, Carrie went back to Saul to try and interrogate Dante further. He wasn’t talking and had demanded a lawyer. Carrie told Saul that they should get him one. A laywer arrived but it was a man posing as one as part of a plan to get Dante to talk.

The lawyer gave Dante some paperwork to sign and Dante obliged. Shortly after he collapsed to the floor in the style of General McClendon. He realised he had ink on his hands and must have been poisoned. Carrie wanted to rush into the room but was held back by Saul. When she finally went in, Dante was in a bad way. He managed a few words to tell Carrie he’d been poisoned like McClendon was by the Russians and that Martin had told him.

It was the breakthrough that Carrie and Saul needed and enough to get a warrant for Martin. However she was now gone with Yevgeny. Their only hope was that the antidote to the poison would revive Dante. However, it looked like they may have waited too long. His heart had stopped and they needed to call 911. Will he survive?

Check out the Homeland 7×09 trailer below:

Carrie has problems at home. Saul and Wellington work on Paley.