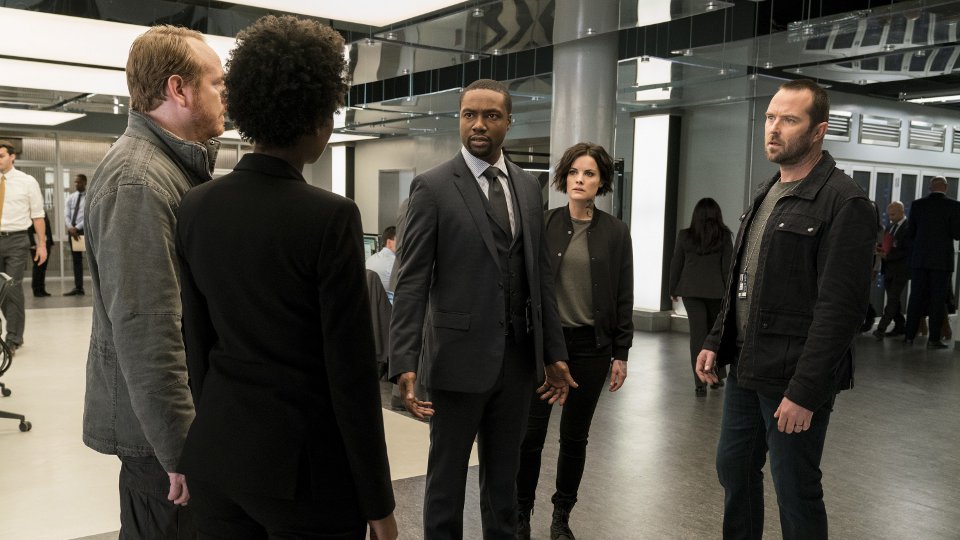 In the latest episode of Blindspot season 3, Weller was reunited with his old FBI partner.

The episode opened up with a man apparently threatening some hostages with a knife. He asked to know ‘the location’ but no-one was talking. Instead he grabbed one of the male hostages and dragged him away while saying “Fine, we’ll do it the hard way”.

At the FBI, Weller (Sullivan Stapleton) and Jane (Jaimie Alexander) sat with Avery (Kristina Reyes) to try and find out how she got mixed up with Roman (Luke Mitchell). She explained about her adoptive parents, her mother died of cancer and her father jumped off a bridge. Avery held her father’s boss responsible who turns out to be Hank Crawford (David Morse). Avery also explained that she decided to track down Jane, her real mother, and that Roman reached out to her when he found out about her search.

Reade (Rob Brown) held a meeting to see what everyone’s thoughts were. Zapata (Audrey Esparza) was suspicious of the validity of Avery’s claims and suggested a polygraph test. Jane agreed. Weller offered to talk with Jane but she still hasn’t gotten over his lies.

Patterson (Ashley Johnson) was sent a video by Roman that helped point her at the next tattoo puzzle. The corresponding tattoo’s when arranged correctly formed a ship with the name Donald Ley. It pointed at Weller’s old partner, Donald Shipley who was now working for a private weapons contractor.

Weller agreed to go and meet with him and found him waiting on a meeting with some terrorists. Shipley told Weller that he was working undercover for Homeland Security. The terrorists wanted to get their hands on an EMP device to knock out a power plant that supplied New York. Shipley said Weller was an expert and they agreed to get what they needed within 24hrs.

The EMP deal was a cover for trying to capture Nils Bresden (Chance Kelly). He’s the guy shown at the start of the episode. He’s an ex-Green Beret who now runs the largest underground militia in the US called The Regimen. They want to overthrown the government.

Meanwhile, Roman was in Morocco with Victor waiting in the desert for Crawford. They had a secret deal going down but Victor wasn’t for telling Roman the details. Crawford eventually showed up and said the location they were at was their future. After Crawford left, Victor revealed that he knew Roman wasn’t Tom Jakeman.

At the EMP meet, The Regimen demanded a test. Weller set up the EMP with a little cryptic help from Shipley. The test was successful but knocked out the comms with the FBI and Homeland. They then changed their target to a secret Treasury bunker that monitored financial transactions of US citizens.

The EMP was to be used to take out the transaction monitoring to hide traces of Crawford’s deal. Once inside the bunker they took the staff hostage. Weller and Shipley had to stop them firing the EMP but were outnumbered 14-2. Weller managed to get some of Bresden’s men sent away by getting a hostage to lie about there being more staff elsewhere in the complex.

When Bresden decided it was time to execute the hostages, Weller and Shipley made their move. They put the hostages in the vault and took out some of Bresden’s men. Unfortunately, Shipley took a bullet in the leg which slowed him down. It left Weller to go all Rambo on the remaining men. Eventually they ran out of ammo and things were looking bad. Just in time, Jane and Reade showed up to save them.

Elsewhere in the episode, Zapata paid a visit to a blacksite where Eleanor Hirst (Mary Stuart Masterson) was being held. Zapata wanted information from her about Hank Crawford. Hirst said she knew nothing but Zapata wanted to try a new CIA truth drug on her. Hirst revealed that Crawford had ties to The Regimen.

Crawford was annoyed that Bresden had failed him. He concluded that someone close to him must be working for the FBI. Before anyone could speak, Crawford stabbed and killed Victor. He had been tracing his phone (which Roman swapped) and thought it was Victor who was the traitor.

Later, Jane offered to take Avery for pizza but she refused. Jane decided to change Avery’s mind by showing her everything the FBI had on Crawford. Jane went back to Weller’s apartment to talk. She still felt betrayed by him but knew that not forgiving him was what Roman wanted. Looks like Jeller is back on!

At the end of the episode, Crawford gave Roman his next assignment. It was a folder containing details of the FBI team with pictures of Reade, Zapata, Weller, Jane and Patterson. Crawford said he wanted Roman to kill them all.