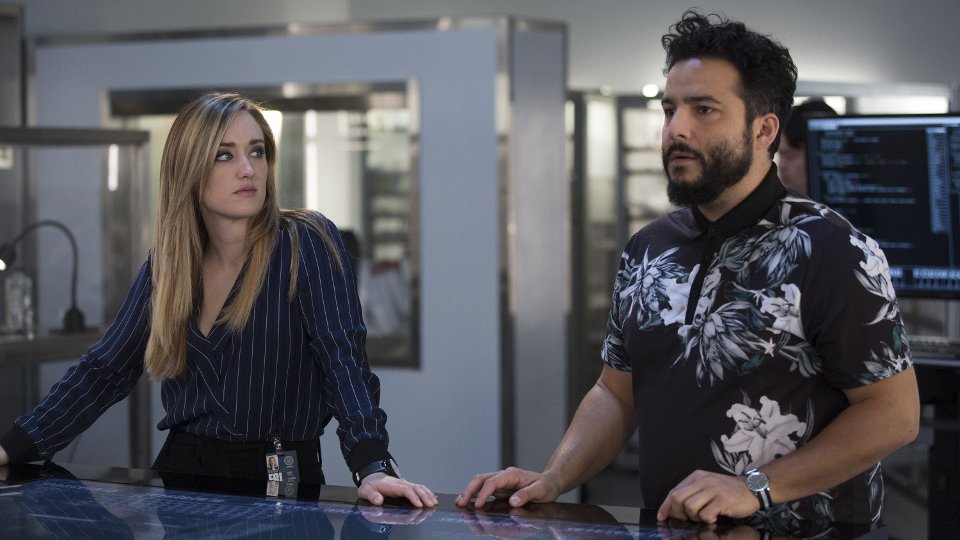 In the latest episode of Blindspot season 3, Patterson’s (Ashley Johnson) Wizardville app was hacked, while she also continued to investigate Avery (Kristina Reyes).

The episode opened up with a naked man running through the streets of New York. People on the streets were taking photos and laughing. When the man stopped he screamed in desperation that he’d done as he’d been asked and wanted to be left alone.

At the end of last episode, Jane (Jaimie Alexander) went to see Clem (Steve Kazee) at his hotel room. This episode showed what happened next. Jane spoke to Clem about her situation with Weller (Sullivan Stapleton) and his accidental shooting of Avery. Clem was keen for Jane to stay but she decided to leave.

Patterson continued her digging into what happened in Berlin. She discovered that Avery also met with Roman (Luke Mitchell) several times. It looked like Weller had been set up. Patterson also discovered a recent distress call from Avery which meant she was still alive. She was being held by German gang leader Dedrik Hoehne.

Jane walked in on Patterson giving her news to Weller. Soon after Reade (Rob Brown) was putting a mission together to save Avery. Jane requested that Weller not be a part of it and instead demanded to take her friend Clem who is a specialist in ransom and kidnapping cases. Reade reluctantly agreed but still sent Weller.

The flight to Berlin was more than a little awkward with Weller and Clem face to face. Weller was understandably off with Clem. They disagreed on how to tackle the rescue operation but Jane decided Clem’s way would be best. He wanted to go in quietly.

During the rescue, Weller had to shoot a gang member to save Clem’s life. It alerted the rest of the gang and they were able to take Avery to a new location. Before she was taken away, Jane managed to get her first ever glimpse of her daughter and it made her desperate to get her back.

Weller called Dedrik and asked what he wanted for them to get Avery back. He said he just wanted a way out. Weller, Jane and Clem eventually tracked Avery down to some tunnels under Berlin. They managed to save her but Jane had to convince Avery that going back with them was her best option.

In the tunnels, Weller and Roman came face to face at a wall made of bulletproof glass. This enabled them to talk but they couldn’t get to each other. Roman said that Hank Crawford (David Morse) was their target and promised more surprises while Weller said that Roman had turned into Shepherd.

Elsewhere in the episode, Patterson’s Wizardville app was hacked. The hacker was able to use a back door in the app to hack the 80 million players and blackmail them. Now the naked man at the start of the episode makes some sense.

Patterson asked Rich (Ennis Esmer) for help and they took a look at the app code. Rich spotted the signature of his former boyfriend Boston (Josh Dean). Patterson revealed that she had hired Boston to work on the app due to his legendary coding skills.

Finding Boston could have proved tricky but he suddenly just showed up at the FBI. He explained he had a new boyfriend called Sanjay (Sanjit De Silva) and they had been using the app to punish bad people. Boston was concerned that Sanjay was about to do something much worse.

The team investigated a man that Sanjay was due to meet and discovered he worked in defence and had access to weapons. They brought him in and eventually got the information they needed out of him. He had sold Sanjay a case of white phosphorous bombs which were destined for terrorists plotting an attack on New York.

Boston agreed to wear a wire to try and help them stop the attack. His plan was to stay with Sanjay so that the team could track him. The meet was happening at their apartment. Sanjay had taken precautions and was using signal jamming equipment. This meant that Boston was on his own. He dry boiled a kettle to create smoke to alert the team to raid.

It worked, the terrorists were killed and Sanjay was taken into custody. Rich asked Boston for a second chance but Boston said it was too late for that. This got Zapata (Audrey Esparza) thinking and she decided to finally tell Reade her feeling for him. Before she got chance, Reade pulled out an engagement ring that he planned to give to his girlfriend Megan (Reshma Shetty).

At the end of the episode, Clem told Weller that Jane still loved him. Roman called Jane to taunt her some more and said she’d regret getting Avery back.