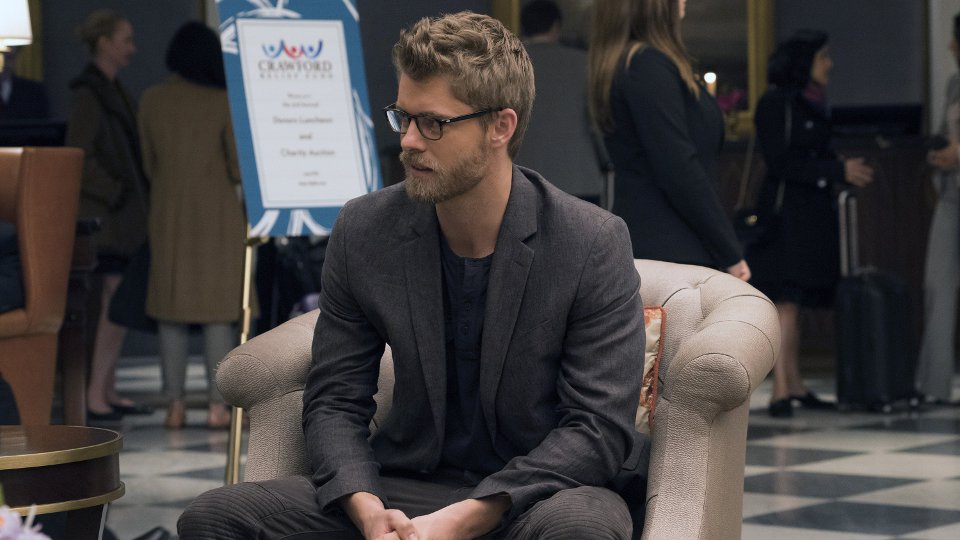 In the tenth episode of Blindspot season 3, the team raced to stop a terrorist attack while Jane (Jaimie Alexander) distanced herself from Weller (Sullivan Stapleton).

The episode opened up with a flashback to six months earlier. At a Kenyan refugee camp, a man named Saya (Jim True-Frost) was arranging for a group to move to New York City. The group were excited until Roman (Luke Mitchell) appeared to tell them that Saya was putting them in danger. Roman gave them a business card of a journalist from the New York Times. He told the group to call her.

Back in the present, Reade’s (Rob Brown) girlfriend Megan (Reshma Shetty) received a call. She ignored it and told Reade that it was a refugee who keeps calling wanting her to tell their story. Reade was interested after hearing it was Camp Iko as that camp had links to a tattoo of Jane’s.

Meanwhile, Weller left Jane another voice message to apologise for what happened. He was really upset and wanted her to come home and said that he loved her. Later, they saw each other at work and Weller asked if she was getting his messages. Jane just said she had everything she needed and ignored him.

Patterson (Ashley Johnson) explained about the tattoo that Reade was investigating and said he’d be late. She gave the team an update on the tattoo with the new information about the refugees that contacted Megan. Patterson had uncovered that the group had their application had been fast-tracked by Saya. She also revealed that Crawford has links to many companies with contracts at the refugee camps.

Reade and Megan met with the refugee group for a coffee. They showed the business card they received from Roman. Reade asked for a description of the man and suspected that it was Roman. He showed them a picture and they confirmed. Reade went to call it in to the team but found he had no phone signal. Looking up he spotted a group of guys heading their way. Reade set off a fire alarm and escorted the group and Megan away.

Back at the FBI, Jane took a call from Clem (Steve Kazee). She had previously called him to look into her daughter Avery. He had managed to track her to Berlin, six months ago, but Jane informed her that Avery was dead. Clem revealed he was in New York but Jane said she couldn’t meet.

Reade left Megan and the group in a room and went to try and find a phone to contact the team. He managed to take out one of the attackers and took his gun. Megan heard gunshots and came to check he was ok.

Meanwhile, the team arrived on scene and Jane shot another attacker. It gave her a flashback to 10 months ago when she ran into Clem. The pair decided to work together but were shot with tranquiliser darts by Dwire (Calvin Dutton). They awoke zip-tied together and flirted as they escaped.

Back at the FBI, Reade and Weller tried to talk to the group but they refused and asked for counsel per the sixth amendment. They were told to do that by Megan but Jane, Reade and Weller convinced her to get them to talk.

The team worked out that Saya was using vulnerable refugees as cover for terrorist attacks he was carrying out. His next target was to bomb a hotel while using a backup group of refugees. Weller and Jane went to the hotel while Reade and Zapata (Audrey Esparza) looked for a van.

Weller and Jane looked for a suitcase identified by Patterson. Inside they found a crude bomb with just over 90 seconds left on the clock. They raced through the hotel with it and put it in an industrial freezer to contain the explosion. They made it with just a couple of seconds left and Jane saved Weller from getting blown up. Outside Zapata found the van with the backup refugee group locked inside. She got them free while Reade took out Saya and retrieved the detonator.

Another flashback revealed that Jane told Clem she missed being part of a team. They also slept together but Jane left him because she still loved Weller. Later, back in the present day, Jane went to Clem’s hotel room. She said she didn’t know why she was there and he said she didn’t need a reason and let her in.

Elsewhere in the episode, Roman arrived in London from his assignment with Victor (Anthony Lemke). They met Blake (Tori Anderson) at a hotel. Her father Hank Crawford (David Morse) wasn’t there because he had to go to Zurich. Blake was going to stand in for him and wanted Roman to go as her date. He said he wanted to give it a miss due to jet-lag.

Blake wasn’t impressed and Roman changed his story to say he couldn’t cope with the camera flashes and crowds. Victor revealed that Roman had PTSD to Blake’s surprise and Roman wasn’t happy about it.

Later, Roman went to see Blake and she said he was lying to her about having PTSD. He used his powers of persuasion to change her mind and told her that he loved her. The pair had an impromptu make-out session before the event.

In the hotel bar, Roman sat and had a drink with Victor. The tension between the pair is rising. Roman said Victor should have killed him in Morocco and Victor said he still might. Victor is obviously suspicious about Roman and had a glass taken to validate Roman’s fingerprints.

At the end of the episode, Patterson revealed to Weller that she had continued looking into Avery. She had discovered some footage from the day before Weller met her. It showed that Roman met with her and paid her. Weller said that Roman had set him up.