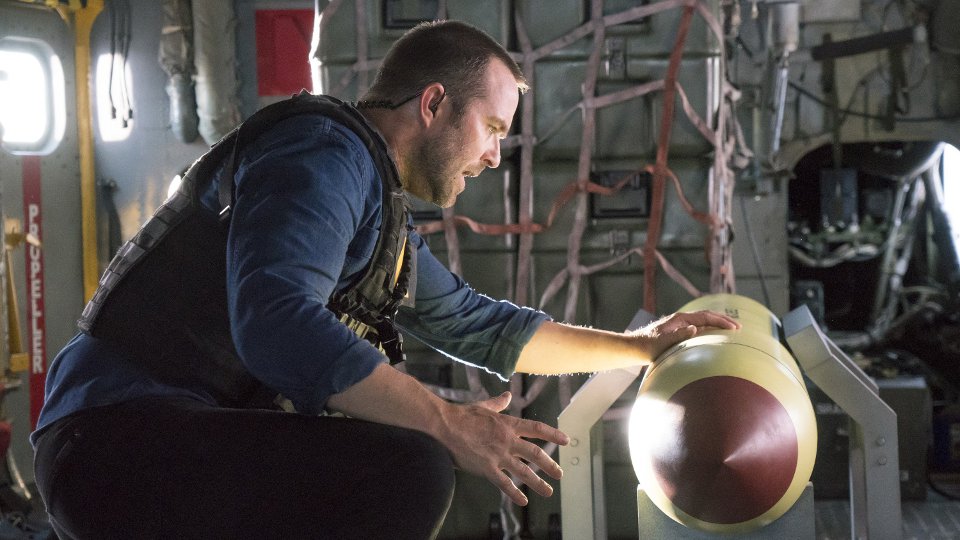 In the ninth episode of Blindspot season 3, Jane (Jaimie Alexander) struggled to deal with the news that Weller (Sullivan Stapleton) had killed her daughter.

The episode opened up with some kind of masked activist live streaming himself and an accomplice breaking into a building. Before getting through the door he spray painted a symbol and said it would “show them”. As he turned around his accomplice knocked him out and the stream ended.

At the FBI, Patterson (Ashley Johnson) had discovered that Hank Crawford (David Morse) had a connection with all the recent tattoo cases. She didn’t have any specific evidence but at least it’s a new line of enquiry for the team.

Meanwhile in Marrakesh, Roman (Luke Mitchell) arrived for his first job for Crawford. As soon as he arrived he was told to turn around and go back home because he wasn’t needed. Roman managed to convince the guy that he was useful to have around so he stayed. He later successfully retrieved a valuable coin for Crawford.

Back at the FBI, Patterson noticed that the symbol left by the activists was a calling card for a group called Blue Dawn. Reade (Rob Brown) somehow noticed that when divided up it could be a slide puzzle and he was right. After solving it Patterson realised it gave them an IP address which led them to a website. She was able to use this to work out where the video was uploaded and Reade and Zapata (Audrey Esparza) headed out to investigate.

When they arrived they found a warehouse owned by the Department of Energy. Inside it stored multiple nuclear warheads in cases and they had just done an inventory. Reade noticed that two of the padlocks were different and opening them up revealed that two nukes had been taken.

Weller and Jane hadn’t turned up for work and no-one knew why. A flash back to the end of episode 8 showed the aftermath of Weller’s confession about Jane’s daughter. Jane was obviously upset but also confused. Weller tried his best to explain what had happened in Berlin. They had a lead on Jane but it was an ambush and Weller had to fight for his life. He took a shot at a silhouette behind a plastic curtain. His target went down and then he discovered he had shot Jane’s daughter. As the enemy converged on his position he had to leave her body behind. It was a heartbreaking reveal and one that Jane really struggled to hear.

The team soon found a lead on the missing nukes which led them to a man. He explained he was doing what he was told because his daughter was kidnapped. CIA man, Jack Keaton (Chad Donella) arrived at the FBI to help and also argue about the best way to take Crawford down.

Keaton recognised a woman from the live stream as Lana, a sister of the former leader of a terrorist group. Their only hope of tracking her was the nukes but they were only trackable when active. The team decided to launch a rescue mission to save the kidnapped child. Jane decided to storm in without backup and ended up getting shot, fortunately just in the vest.

Back at the FBI, Reade took a call from Lana where she gave her demands. She wanted her brother released and all US troops out of Turkey. Reade wanted to release her brother until Keaton informed him that he died during interrogation. They tried to bluff Lana but she knew they were lying and detonated one of the nukes in an uninhabited part of the South Pacific. She threatened that the next one would hit New York.

Patterson worked out which hanger Lana would use to launch a plane to carry out her nuclear strike on New York. The team arrived on the scene and began to investigate. Lana’s plane managed to take off but Weller was aboard. As they fought above Manhattan, the nuke was dropped from the plane. Lana used a remote to arm it and it would detonate when it hit the ground. Weller shot her but she fell out of the plane. To save the day he had to leap out himself after her body. When he caught her up he needed to put a code into the remote before the nuke reached its target. Of course he managed it and the unarmed nuke landed safely in the Hudson. It was a crazy sequence but thrilling to watch.

Despite saving millions of lives, Weller wasn’t able to save his relationship and Jane decided to leave him. She wasn’t able to forgive him for killing her daughter. Weller told her he understood and to take the time she needed but she was adamant it was over.

At the end of the episode, it was revealed that Jane’s daughter is still alive! Maybe there’s still hope for Weller and Jane after all?