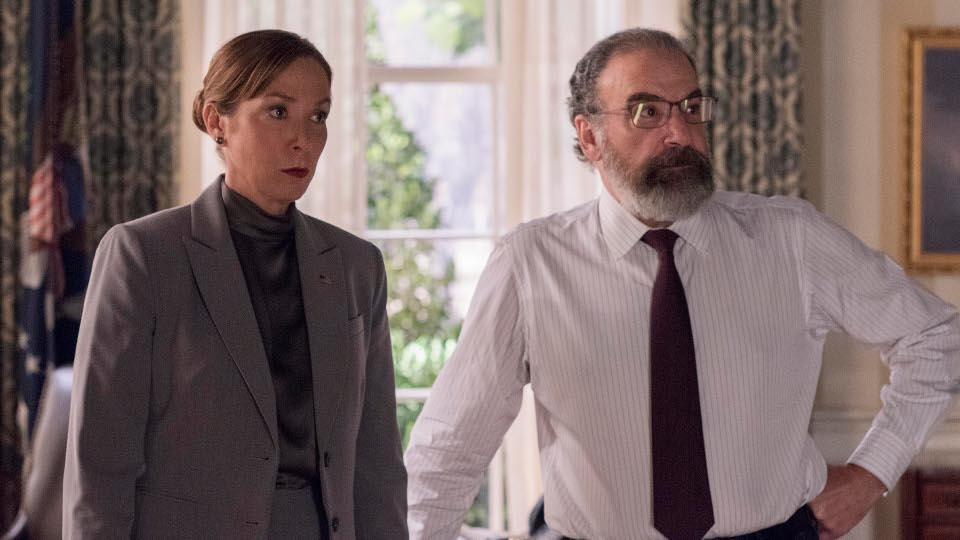 The season 7 premiere of Homeland continued the plot started by season 6. It caught us up with the main characters and set events in motion for the rest of the season.

In the premiere, Carrie Mathison (Claire Danes) had moved, with her daughter Franny, from Brooklyn to Washington, D.C. and was now living with her sister Maggie (Amy Hargreaves). Also living there was Maggie’s husband Bill (Mackenzie Austin) and Josie (Courtney Grosbeck), their teenage daughter.

Carrie was working to try and bring down President Elizabeth Keane (Elizabeth Marvel) for her actions. At the end of season 6 Keane went back on a promise to Carrie and had 200 officials, including Saul Berenson (Mandy Patinkin) arrested.

Carrie arranged a meeting with an old FBI contact called Dante Allen (Morgan Spector). She wanted him to speak to Senator Paley (Dylan Baker) and go on record against Keane. Carrie was extra-cautious at the meet and noticed someone following Dante. She called it off and managed to arrange a different location.

She chose to use her sister’s office and had Josie secretly bring her the keys. The meeting didn’t go to plan because Carrie hadn’t been truthful to either party. Dante stormed off and refused to testify to the annoyance of Carrie and Paley. Back home, Maggie and Bill were furious at Carrie for involving Josie. Maggie was worried Carrie was off her meds and suggested seeing a psychiatrist.

Elsewhere in the episode, General McClendon (Robert Knepper) was on trial for conspiracy and his role in the assassination attempt on President Keane. The President wanted him executed for his crimes but was sentenced to life in prison. Keane was furious and demanded that Wellington (Linus Roache), her chief of staff, fix the sentence.

Brett O’Keefe (Jake Weber) is also back this season and this time he’s on the run with his assistant. Each day he does a daily anti-Keane broadcast and his latest one focused on the McClendon trial. After the broadcast it looked like they had been caught but the cops were there to warn him the feds were on the way.

Wellington paid a visit to Saul and made an unexpected offer. He said he wanted Saul as National Security Advisor. Saul said he would consider it but only if all officials in the second wave of arrests were released. Wellington said it was an impossible request.

During a routine security sweep at Wellington’s house, Carrie had Max (Maury Sterling) infiltrate the team. While there he was able to install some hidden camera’s which would allow Carrie to spy on Wellington.

At the end of the episode, General McClendon went to prison and was subjected to a strip-search. During this one of the officers had him open his mouth to check there was nothing inside. The officer was wearing rubber gloves and grabbed McClendon’s tongue to check. Once left alone in his cell, McClendon collapsed and died. The officer who performed the search watched it happen via the CCTV as he carefully removed his gloves.

Check out the Homeland 7×02 trailer below: