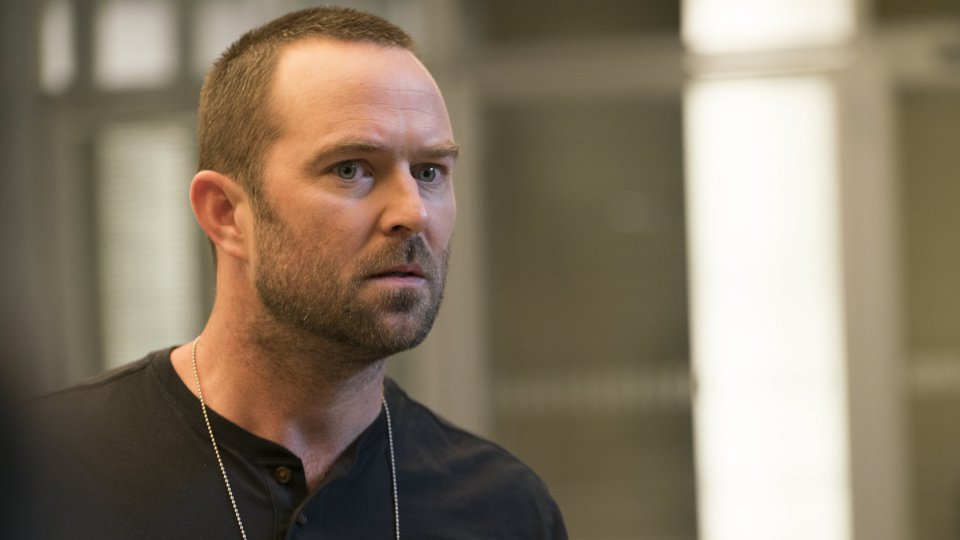 In the eighth episode of Blindspot season 3, the team worked together to try and finally take down Hirst (Mary Stuart Masterson).

The episode opened up where episode 7 left off, and showed Hirst getting the news that Vance had been killed. Next she accessed a secret list of contacts on her phone and called the guy who was running things. Hirst appealed for his help if things went bad but he said if that happened he’d be hunting her down.

With Vance dead, the team were left with no-one to testify against Hirst. They were also out of time because she was obviously now on to them. Back to the meeting between Hirst and Reade (Rob Brown) from the end of last episode, he tricked her to keep trusting him by telling her his team was compromised.

Hirst immediately got to work on trying to save herself and take the team down. She gave an encrypted laptop to Rich Dotcom (Ennis Esmer) and tasked him with breaking into it. A trivial task for Rich but once inside he found it was a loaded with fake data painting Patterson (Ashley Johnson) as Stuart’s killer.

Instead of going straight back to Hirst, Rich updated the team. They worked to try and get Patterson out of the building before Hirst could have her arrested. After loading the security camera’s with a virus he gave Patterson directions to escape through the ventilation system. He met her at the other end with a prosthetic mask that made her look like an old man. It worked and she got out of the building to Zapata (Audrey Esparza) who took her back to the apartment.

While the FBI tried to track Patterson down, Hirst worked out that Rich had helped her so had him arrested. To buy time, Rich made up a bunch of outrageous stories to frustrate Hirst. Eventually she offered him a clean slate, complete freedom and the location of his true love. Rich was tempted but decided to turn it down.

Meanwhile, Weller (Sullivan Stapleton) and Jane (Jaimie Alexander) realised they needed to get Hirst’s secret phone from her office desk. To give them time to access it unnoticed, Patterson called in a bomb threat. As the building was evacuated they broke in but discovered an electromagnetic device that wiped their phones. To get Hirst’s out without wiping it, Weller threw it into the vents.

Hirst was alerted to the break-in and dispatched a team. Weller gave himself up so that Jane could retrieve the phone. Jane managed to upload the phone data to Patterson and Zapata. In the data Patterson found the secret contact list and a clue that led them back to Kinga, the company behind the Bluetooth personal assistant from previous episodes.

The FBI tracked Patterson down and she gave herself up in order for Zapata to pursue the Kinga lead. She arrived at the owner’s apartment to find it had been ransacked. Obviously Hirst had got there first. Zapata spotted a hidden camera and received a message from the owner who must have been watching from a safe room or remotely. She led Zapata to a recording of Hirst from the night of Stuart’s murder.

Back at the FBI, Hirst now had most of the team in custody and next to be captured was Jane. Zapata called someone she trusted and had them play the recording of Hirst over the tannoy system. Finally the break they need and Hirst was taken into custody.

Reade went to interrogate Hirst but found she was in a cocky mood. Somehow she had managed to have Zapata kidnapped and used her to force Reade to get her out of the building. She offered Reade Zapata in exchange for her freedom so he went along with to save his friend. Before Hirst got away, Weller and Jane arrived on the scene and saved Zapata. They next went after Hirst and brought her into custody before she could escape.

Elsewhere in the episode, in Barcelona, Roman (Luke Mitchell) continued his fake romance with Blake Crawford (Tori Anderson). He helped her lose her security detail much to the annoyance of her father.

Later, Blake took Roman to meet her father, Hank Crawford (David Morse). It turns out that he is the one controlling Hirst and finally Roman’s story arc begins to make a little sense. He tried to hire Roman who turned him down and walked away. However, Blake later talked him around and he agreed that he would take the job.

At the end of the episode, Roman called Weller annoyed that Hirst was still alive. However, he retracted his threat to tell Jane what happened in Berlin. Once Weller got off the phone he decided he would come clean to Jane about his secret from Berlin. It was a bigger secret than we thought. Instead of telling her that he met her daughter in Berlin, he confessed that he had killed her daughter!