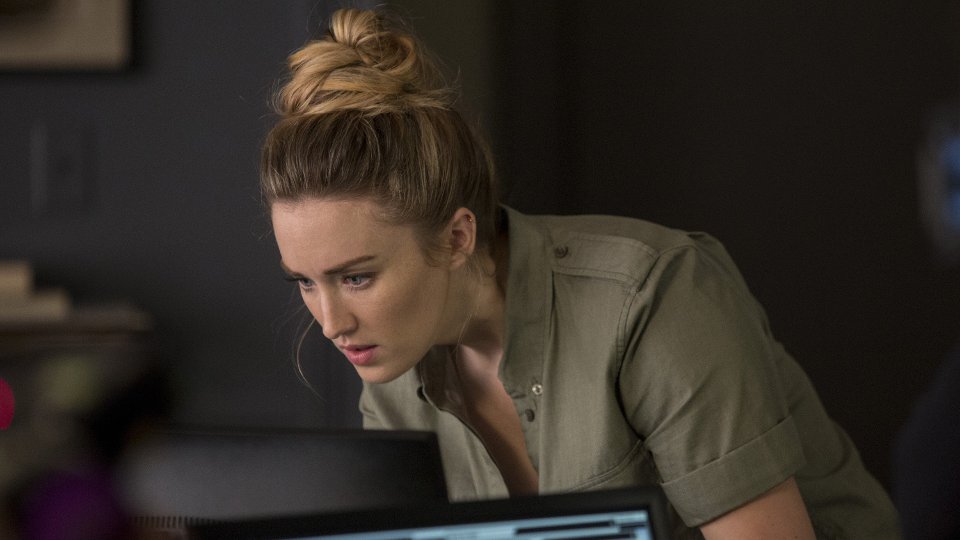 In the seventh episode of Blindspot season 3, the team were forced to run a covert operation out of Jane and Weller’s apartment.

The episode opened up with a flashback where we finally got to know who killed Stuart. After solving the molecule tattoo he was obsessed with he discovered a list of people who owned van Gogh’s famous Self Portrait. Remembering he’d seen Hirst with a one-eared man who was nickednamed van Gogh he decided to text her. Out of character, Hirst soon turned up at Stuart’s apartment and slit his throat.

At Jane (Jaimie Alexander) and Weller’s (Sullivan Stapleton) apartment they were holding an early Christmas with Allie (Trieste Kelly Dunn) for Bethany. Jane presented Weller with a gift that had arrived wrapped in black. It was a set of toy blocks from Roman (Luke Mitchell) but Patterson (Ashley Johnson) realised they were a clue to unlocking the molecule tattoo.

Solving it led them to a medical trial for patients suffering from cancer. Suspiciously, two staff working on the trial had died recently. Jane and Weller went undercover and spoke to Dr. Palmeri who was leading the trial. They felt she was hiding something. Meanwhile, Reade (Rob Brown) and Zapata (Audrey Esparza) stole data from the facility’s server room. Before they left, Reade took a call from Hirst who wanted to meet up with them both. Later during the meeting Hirst requested that Reade take Zapata off the team.

Patterson decrypted the data and a found details of the patients in the trial. Weller and Jane went to question one of them and discovered the man’s husband was Hirst’s van Gogh. He fled but the pair gave chase and apprehended him. They took him back to their apartment so that Hirst wouldn’t find out.

He revealed he was named Eric Vance and was ex-military but refused to tell them anything further. They got Allie involved and she dug up a file on him which explained he’d worked security for Hirst for a year before she joined the FBI. He eventually cracked and gave the team some answers. He was scared of Hirst because she had got his husband on the trial in return for him performing jobs for her.

The team refocused on Dr. Palmeri and discovered that she and her partner were going to release a deadly virus. She had a cure for it and hoped to make a fortune off it. The clues led them to a water treatment plant and Weller, Jane and Allie arrived just in time to stop the attack.

Back at the apartment, Vance agreed to testify against Hirst. He also gave them detailed information on the dirty work that Hirst had him perform. This included covering up Hirst’s murder of Stuart which finally gave the team what they needed to know.

Allie sorted out a safe house for Vance and his husband. However, his husband refused and wanted out of the trial after hearing about Vance’s lies. Reluctantly, Vance said he’d leave him alone forever but begged him to stay on the trial.

Vance was taken to the safe house. Somewhat predictably a sniper took him out through the window. Weller quickly notified the team that Hirst knows everything. At the end of the episode, Hirst walked into Reade’s office as he got the news from Weller.