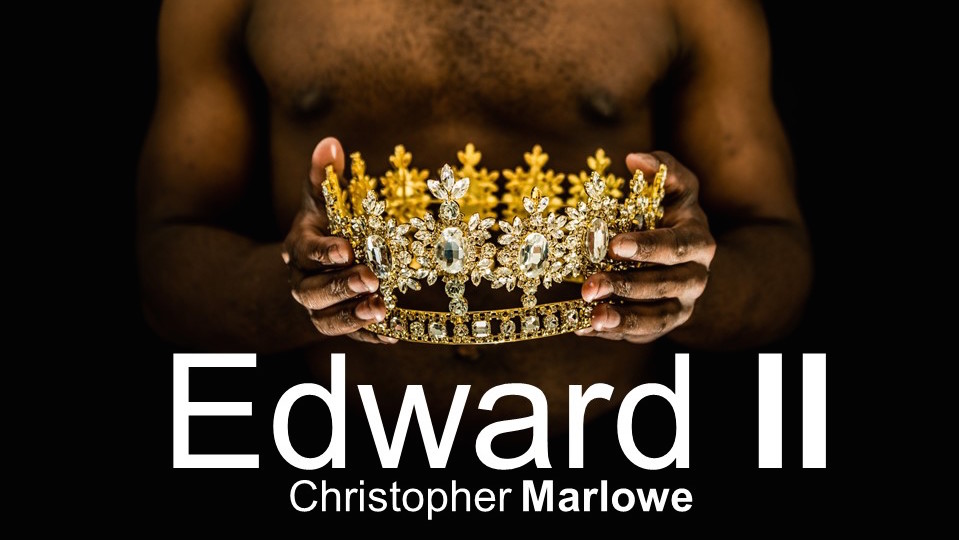 The King is dead. His son, Edward II, is crowned King. Edward II’s first act: to call home from banishment his lover, Gaveston.

Christopher Marlowe’s epic 1592 tale is, of course, a story of forbidden love. In their promo material Lazarus Theatre Company dub it ‘The First Gay Play’. Marking 50 years since the decriminalisation of homosexuality in England and Wales with this fresh production, the company wish to investigate, celebrate and explore identity and sexuality.

The predominantly male cast (save for Queen Isabella – rousingly portrayed by Lakesha Cammock) bring passionate performances to the The Tristan Bates Theatre as Director Ricky Dukes has brought Edward II screaming into the 21st century.

In intimate surroundings the audience feel engulfed by the black walls and claustrophobic atmosphere Dukes builds as the cast pace the set, staring blankly ahead, while we take our seats and await the action to unfold. A single red telephone, a loud speaker, and few pieces of office furniture, paper and modern costumes (save for the King’s bejewelled crown and golden robes) are all the players have at their disposal to bring to life the tumultuous scenes about to befall King Edward.

The lovesick King’s naïve, foolish and, at times, rather camp nature are well conveyed with a likeable vulnerability by Luke Ward-Wilkinson. Edward II does not love his Queen Isabella of France. He’s only got eyes for his roguish French lover Gaveston (impishly portrayed by Bradley Frith) and is neglecting his brother, wife, noblemen and all his duties as head of the kingdom.

Defiant, petulant, Edward rubs his affair in the face of his queen and nobles. At first the King’s senior advisors simply want Gaveston banished from the Kingdom. Yet, after trying and failing, they realise the only way forward is cold-blooded murder. There’s much plotting, conferring and back-stabbing as one expects from such a great history play as Kent (Alex Zur), Young Mortimer (Jamie O’Neill) and his brother Mortimer Senior (Andrew Gallo) conspire with Warwick (John Slade), Lancaster (Stephen Emery) and Pembroke (David Clayton) to rid the King and, indeed, the world of Gaveston.

In the ‘real world’, back in the 14th Century, rumours of Edward’s murder at Berkeley Castle led to whisperings that it’d been done by the insertion of a red-hot iron into his anus. As the fast-paced play approaches Marlowe’s take on this gruesome end for our King, strobe lighting and sinister animal masks help create a stark, terrifying scene. As blood spatters down from the ceiling, audible gasps of horror spilled from the Tristan Bates Theatre last night. It’s truly astonishing that so many years have passed since Marlowe but pen to paper (quill to parchment?) yet homophobic messages of hatred, intolerance and violence still remain in modern society. Bravo, Lazarus Theatre Company, for delivering a production that packs a powerful and pertinent punch in 2017.