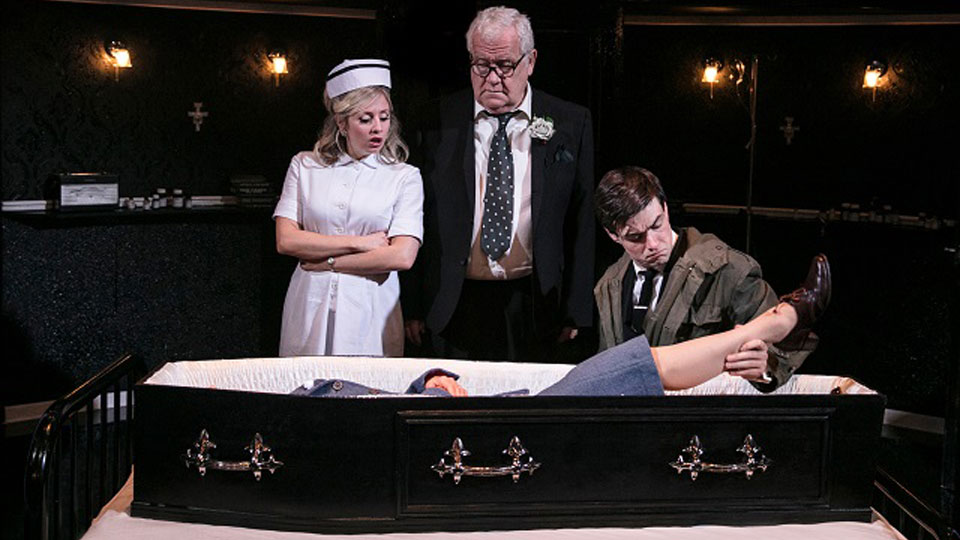 Marking the 50th anniversary of playwright Joe Orton’s violent death, an uncut version of his provocative crime-caper, Loot, finally gets a showing at London’s Park Theatre. The darkly comic tale unfolds like a Coen Brothers remake of Fawlty Towers with director Michael Fentiman utilising just enough restraint to avoid over-glossing the production. Instead, the play remains faithful to its era, right down to the exaggerated Cockney accents, farcical action and breakneck pacing typical of ‘60s comedies.

It was a wise move because it happily positions the content as dated, emphasizing how unrealistic it would be to expect Loot to have the same shock-value as in its heyday. Premiering in the West End in 1967, the script was censored by the Chief Chamberlain due to its depiction of homosexuality, attacks on religion and the mistreatment of a corpse. Still, Loot successfully surprised and entertained audiences even in its edited form. Sadly, the award-winning production was only a few months into its run when 34 year-old Orton was bludgeoned to death by his lover, Kenneth Halliwell.

Scandal, it seems, was always Orton’s destiny and while Loot’s themes may now seem rather tame, there is something seriously wrong with anyone who doesn’t wince as well as laugh at the on-stage shenanigans involving a corpse. The dead body in question is that of Mrs McLeavy (Anna Ruddin), who is laid out in a coffin, at home, on the day of her funeral. Of course, she doesn’t remain there for long!

Her grieving husband, Mr McLeavy (Ian Redford), is oblivious to the wicked intentions of the nurse hired to care for his wife in her final weeks. A far from pious Catholic, Nurse Fay (Sinead Matthews) is no more God-fearing than a Devil Worshipper. Meanwhile, his son Hal (Sam Frenchum) and his undertaker ‘friend’, Dennis (Calvin Dembra), are unlikely criminals who find their crooked plans derailed by the unexpected arrival of Truscott, a seriously warped Police Inspector (played by Christopher Fulford).

Orton’s script is the pinnacle of satire, dripping contempt towards the hypocrisy of those in authority, yet easily capable of falling flat with the wrong staging and a weak cast. Thankfully, there are no cock ups at the Park Theatre, although I could mumble about Gabriella Slade’s set looking more like a gothic funeral parlour than a living room with its glass and crucifixes. That was a bit confusing for the first five minutes but, overall, the visual impact was impressive and the play so good, only someone really picky would allow it to mar their enjoyment.

The audience was whooping, cheering, whistling and clapping like possessed seals on the night I sat in the theatre… and that was just at the interval! If the cast thought the noise was deafening at that point, the eruption at the end of the play must’ve left them needing hearing aids.

Anna Ruddin made a remarkably good stiff, even when being lugged around, stripped and prodded by her co-stars. If the bruises on her legs were anything to go by, rehearsals were painful but worth every knock and scrape because she somehow stole the show. The only other corpse I have ever praised to this extent is Jesus, and he had to come back to life to gain the world’s attention.

Christopher Fulford’s Truscott was marvellously unpleasant and volatile, more so than any felon, and as Orton was no stranger to the law, the character bears the brunt of the playwright’s disdain. Calvin Dembra and Sam Frenchum didn’t place a foot wrong, despite having to walk the fine line between criminals with both the nous to pull off a bank heist and the stupidity to botch their escape plan.

Ian Redford was ideal as the sorrowful widower and he raised many a laugh, particularly when his emotions over-boiled. Sinead Matthews’ twisted nurse, Fay, was faultless, bearing the responsibility of delivering Orton’s best gags and making the task seem as easy as breathing. Even Raphael Bar, with a walk-on part as Meadows, a local Bobby-on-the-beat, had perfect comedic timing, batting one-liners between himself and Truscott as if it was a Wimbledon match.

Rich in humour, scorn and action, this version of Loot is certainly worth chasing. I can almost hear the ghost of Joe Orton, clanking his chains with approval and glee, while simultaneously cursing us sanctimonious critics.