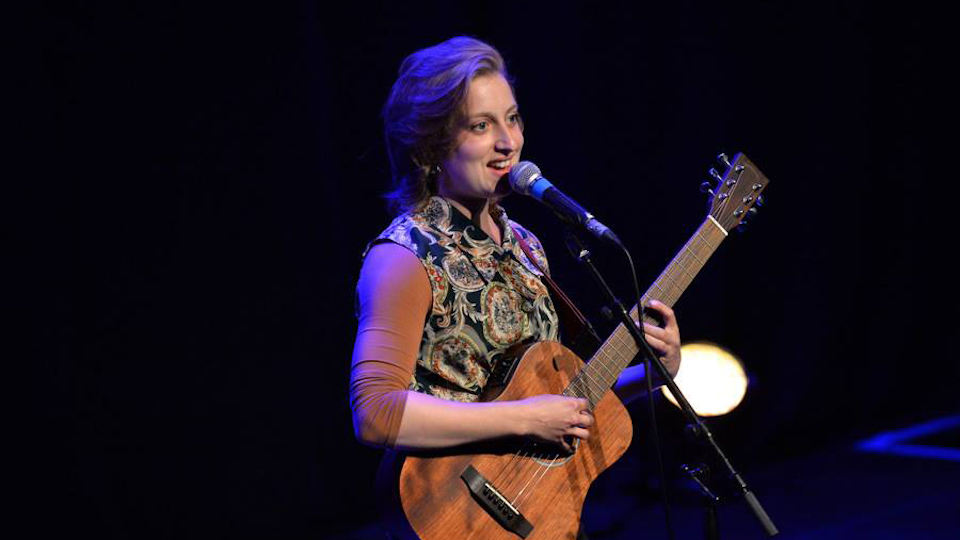 Credit: So You Think You're Funny? finalist Harriet Braine

Former History of Art student Harriet Braine takes to the stage armed with a guitar and her thoughts on the work of long-dead artists she admires – and some she harbours thinly veiled contempt towards. Kicking off an entertaining and uplifting musical hour, adapting the tune of Natalie Imbruglia’s 90s hit ‘Torn’ to fresh lyrics, Harriet sings a tongue in cheek love song to Scottish architect and designer Charles Rennie Macintosh.

Between the humorous parody songs Harriet develops a loose premise to tie the show together. Hosting a lecture as “Professor Braine”, we, her students, have a lot of revising to do. Thankfully, Harriet utilises physical props, holding aloft examples of artwork she’s referencing. Essential in jogging the memory for anyone rusty on their art knowledge when encountering the likes of Katsushika Hokusai’s The Great Wave, it’s a simple and effective aide memoire to prevent the humour easily being lost. You feel ever so more clever when you ‘get it’.

Talented Harriet’s going from strength to strength. In 2016 she was So You Think You’re Funny? finalist, was crowned the winner of Funny Women’s Stage Award, and was named Best Newcomer at the Musical Comedy Awards. Her debut hour at the Fringe proves further that she is without doubt one to watch. While ‘The Arts’ as a whole continues its struggle against lack of investment, it’s delightful to take a stroll through the past and see the makings of a future star like young Harriet Braine.

Launching effortlessly into an impressive array of songs about Leonardo Da Vinci, Monet, Tracey Emin, she builds to a particular highlight in an incredibly catchy ditty about Pablo Picasso (“Nobody did it like you, bro’”) during which she shows off an immense talent for blowing her own trumpet, literally, by creating the sound using just her lips. What a party trick!

Puns a plenty are packed into this informative, high-brow hour of amusement. It’s far from inaccessible, though, so don’t be put off if Art History isn’t your thing. Harriet Braine’s skilled at drawing some light-hearted banter from the crowd – no mean feat when presented with a somewhat sparse and (somewhat) sober afternoon audience. Relaxed behind the mic, she appeared unflappable even when technical issues arose and – entirely alone in her one woman show – she quickly fixed them herself.

Rattling off recognisable tune after tune, adopting different characters and accents to suit her musical whimsy, it’s a thoroughly impressive debut. Even better, Fringe fans, it’s free (donations are encouraged, of course, for all struggling artists still have to eat y’know). The only drawback is the venue’s location. Although The Golf Tavern is a fine drinking establishment with a decent upstairs space for housing comedy, it’s a good 20-25 minute walk from the centre of Edinburgh’s Old Town. Off putting for Fringe goers on a tight schedule, perhaps, so make sure Harriet’s jovial slice of comedy is first thing on your day’s agenda.