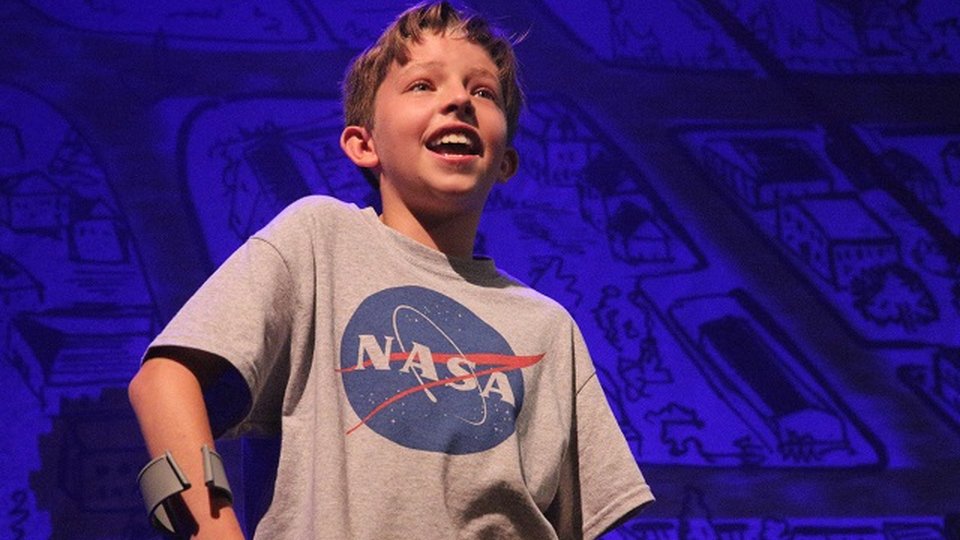 I’ll endeavour to keep this short because you won’t thank me for spending too long reading this when you could be at the Ambassadors Theatre watching a cast of brilliant young teens own the stage in 13 – The Musical. Get online and book your tickets right now. Right now, I tell you, because the show is surprisingly funny and endearing.

The sassiness of the script had me clutching my chest in both shock and admiration and I walked out of the theatre with a grin the size of Birmingham plastered over my face. With music and lyrics from Tony Award Winner Jason Robert Brown and a book by Dan Elish and Robert Horn, the jaws of the audience frequently hit the floor and bounced back up before erupting into laughter.

The jokes were that ‘un-PC’… and from the mouths of babes! Oh, how I approve. Political correctness has no place in the theatre and it was glorious to see kids telling it like it is in this plucky coming-of-age tale about a 13 year old boy, desperate to fit in to a new school.

The action unfolds in the American town of Appleton, Indiana, but the cast is the latest group of youngsters to emerge from the British Theatre Academy. The line-up will alternate throughout the play’s run, but I was lucky enough to catch Milo Panni as our protagonist, Evan Goldman. Delivering a mature, well-rounded performance, he gave us everything from teen angst to cheeky charm, and appeared comfortable and confident on the West End stage.

That poise was reflected in co-star Madeline Banbury, who shone as Evan’s geeky love interest, Patrice. Her beautiful singing voice was closely rivalled by that of Isabella Pappas, who stood out as mean girl, Lucy. Lewis Ledlie’s turn as Brett, the Quarterback, was well-contrived as arrogant and dim, and Ethan Quinn raised the loudest laughs, as Archie, a scheming yet loveable kid with special needs. His impeccable timing and amusing facial expressions brought the house down so remember his name – it’s likely to end up in lights one day.

Directed and choreographed by Ewan Jones, the cast pulled off 18 numbers, including high-energy dance routines and heart-tugging solos. The high-school hijinks and stereotypes were hardly original but the characters were so likeable, and the narrative so relatable, it hardly mattered. In fact, there’s little to criticise about 13 – The Musical; it’s near perfect.

At a push, the production could possibly shave its duration of 1 hour 45 minutes, and it’s a shame there aren’t any standout songs to hum at home. Catchy rock beats – worthy guitar and piano arrangements overlaid with dull lyrics – would benefit from stronger choruses and sing-a-long verses, yet every number was visually entertaining. ‘Hey Kendra’, sung by the school’s jocks, was highly comical and ‘Opportunity’, featuring a squad of high-kicking cheerleaders, was spectacular.

An unfussy set, from Tom Paris, balanced out the big dance routines and was thoughtfully utilised to stage a variety of locations. A giant map of Appleton would illuminate key areas to indicate whereabouts in town each scene was staged and characters would wheel out frames with signs for different hangouts: bedrooms, high school lockers, the gym, a local Dairy Queen (that’s an ice-cream parlour to us Brits).

Appealing to both adults and teens, 13 – The Musical journeys through all the humour, beauty and embarrassment of one of the most awkward phases of childhood, only you’ll probably want to relive this version again and again. I certainly do!