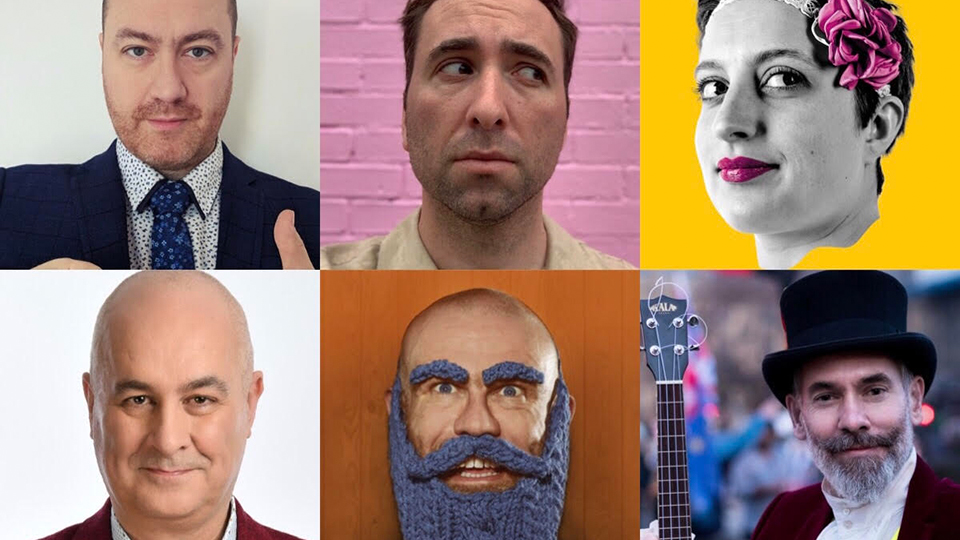 Joe Bor: The Story of Walter and Herbert

Funny Women Awards winner and musical comedy maestro, Harriet Braine is back, favouring her own compositions over musical pastiches. Les Admirables is a historical, feminist coming-of-age musical comedy show, where Harriet brings forth a team of rebellious women from the history of science to help her wage battle against her inner demons. She also looks back over her career as a performer, from school plays to now, boldly, and knowingly, presenting her achievements alongside those of renowned inventors, healers and technological pioneers.

Olaf Falafel will bring his trademark goofball comedy off the back of a very busy year where he launched his own imprint to publish his latest book, ‘It’s One Giant Leek For Mankind’, released in time for anniversary of the moon landing.

Definitely not a middle ground fan is well-known Leaver and financial journalist, Dominic Frisby. His ’17 Million F*** Offs’ went viral and it will be one of the Libertarian Love Songs he will bring to the Fringe. “If you believe in things like free speech, free trade, bitcoin or Brexit, you’ll like this show. If you think the government, BBC, Guardian or EU has the answers, you won’t. Songs, stories and stand-up for people who think the government should stay out of it. No entry to statists, crony capitalists, large corporations or the metropolitan liberal elite.”

Alex Kealy is back with a new hour of comedy about the emotional roots of our rational thoughts, contending that we’re all prejudiced, sentimental bell-ends who see politics through emotional prisms and personal connections…and then tack on a rationale for those gut decisions after the fact. Rationale reveals that, among other things, stink bombs, German classical music and MRI scanners can shed some terrifying light on human behaviours and hypocrisy.

Scottish Comedian of the Year 2017/18 has been banned from many things – hotels, venues, Facebook, sexual positions. But, in 2019, Leo’s show ‘Right Wing Comedian’ was protested at UK dates and banned from Australian Fringe venues following allegations of transphobia – despite being written with a transwoman he was dating. His new show, Transgressive, looks at history’s greatest transgressors, from Gallileo to Gandhi, and rips into modern political correctness, censorship and victim culture.

Konstantin Kisin made international headlines by refusing to sign a ‘safe space’ contract for a university gig. Kisin’s Fringe debut, Orwell That Ends Well, offers an intelligent, uncompromising look at free speech and ‘wokeness’. Full of tales of rags-to-riches-back-to-rags (as the son of a former oligarch) and razor-sharp observations about the world, Kisin’s comedy walks the line between offence and humour as he tears into the sacred myths of modern society. Directed by Jonathan Pie co-writer Andrew Doyle (aka Titania McGrath).

Laura Lexx will follow up Trying, her very successful show of last year about infertility and mental health, with a more wide-ranging, world problems show. Knee Jerk will look at how hard it is to be a good person these days, ranging over topics like feminism and eco anxiety. ‘Can you change the world without offending anyone?’, Laura asks.

UK-based American comedian, TV pundit and Trump-baiter (blocked – then unblocked – by Trump on Twitter), Erich McElroy contends that the middle ground is the new daring in Radical Centrist. With politics moving to extremes and into nearly every aspect of our lives, Erich finds another way. ‘The only true centrist comedian at the Fringe’, Erich is rising up to demand incremental change and reasoned debate. He’s crossing over the left/right divide in a way that’ll make you stop and think – or at least slow down.

Steve N Allen, known for his dry newscasting duties on The Mash Report, brings Better Than – a look at how hard it is to be better. “When you want to be PC, right on or woke it can be tough. Be better than a Weinstein. Be better than an angry Twitter egg. Be better than you.”

Robin Morgan: What a man…

See more and book tickets on the fringe website.

In this article:Edinburgh Fringe Festival