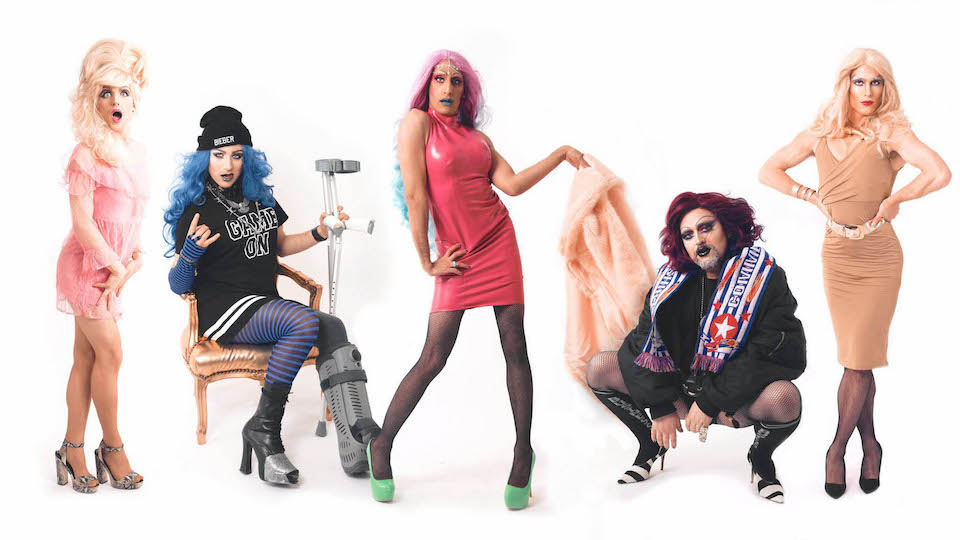 It’s hard to think of a more poignant time to watch DENIM: World Tour, which has well and truly landed at this year’s Edinburgh Fringe Festival. This collective girl band of drag queens is on a mission, forming an ensemble of glittering Trojan unicorns to deliver a deep-set message to the establishment.

If you’re wondering who today’s punks are, look no further. Uniting to show us the “DENIM way”, we’re introduced to Glamrou La Denim, Crystal Vaginova, Shirley Du Naughty, Elektra Cute and Aphrodite Greene (née Jones). And if there’s anyone destined to get arm-chair liberals out of their chairs and leading a revolution, it’s these ladies.

The setting might be a wobbly stage under a bridge in Edinburgh’s Cowgate, however, the band remind us that gender is a construct and Wembley – well, it’s a state of mind. It doesn’t take much encouragement for the audience to immediately feel part of the DENIM family, with its sheer hilarity and seamless reincarnations of much-loved songs. The intimate staging creates a magnetic atmosphere where we are transported to DENIM’s lived-in reality, a world much brighter, glittering and rainbow-coloured than the world outside.

If it’s possible to draw on the influences shining through each performance, imagine the sultry tones of Lana Del Rey with the considered deliberations of Cate Blanchett in Blue Jasmine from Aphrodite; A Marxist Courtney Love-come-Avril Lavigne from rocker/performance poet Elektra and the magnificent Crystal who makes Adele’s Glastonbury headline set look and sound like a visit to the dentist.

Suddenly unsure as to whether I was in Edinburgh’s city centre or South East London, there was a particularly enjoyable grime-esque breakdown from the slightly deranged ‘Cupcake Killer’ Shirley. I also got to do some much neglected exercise during her number, which some of the audience struggled to get on board with (maybe they’d been up Arthur’s Seat earlier that day).

Perhaps the most impactful moment came from Glamrou as she described her experiences of Islamophobia in the West and homophobic rejection by her Muslim parents. Her stand-up routine was exceptional, wonderfully balancing the high-octane pace and energy that propelled the performance.

Confronted with glamour, exceptional vocals and beautiful harmonies, the real magic of this show is its intelligent composition and conclusion. We live in a world where we can no longer ignore the many adversities with which we are now confronted. Behind the music, production and make-up lies a political power pop band making a stand with a rallying battle cry for love, tolerance and inclusion. Sisters and brothers, let’s get in formation.