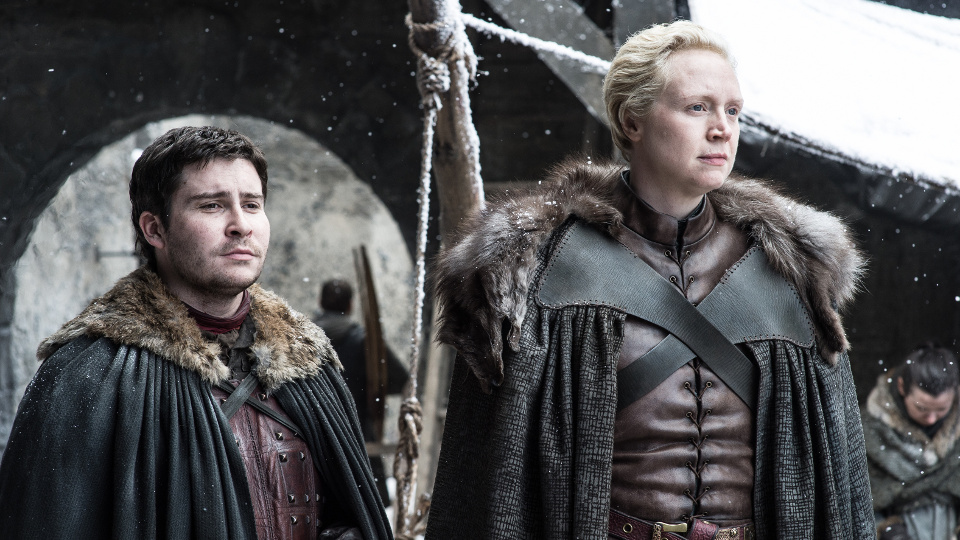 Game of Thrones returned for the fourth episode of the season. The episode saw a long overdue Stark reunion at Winterfell and Dany (Emilia Clarke) took the fight to the Lannister army.

If you haven’t seen Game of Thrones season 7 episode 4 yet and don’t want anything spoiled then please stop reading now. If you are up-to-date and want to relive the action then keep on reading.

The episode opened up with the Lannister army marching back from Highgarden. They were taking the gold back to King’s Landing so Cersei (Lena Headey) could repay their debt to the Iron Bank.

Bronn (Jerome Flynn) complained to Jaime Lannister (Nikolaj Coster-Waldau) that he wanted more gold and a castle. Jaime told him that Dany was coming but after they had won he would be able to choose any castle he wished. Randyll Tarly (James Faulkner) rode up to tell them that all the food had been collected. Jaime told Bronn to help.

At King’s Landing, Iron Banker Tycho Nestoris (Mark Gatiss) spoke with Cersei about the debt situation. He was delighted that she had kept her word and that the gold was on the way. He said the Iron Bank would miss their interest payments. Cersei said she would need more help to expand her armies and navy. Tycho promised the Iron Bank’s support once they had been paid.

At Winterfell, Littlefinger (Aiden Gillen) spoke to creepy Bran (Isaac Hempstead Wright) about his mother Catelyn. He said he would have saved her if he had been there and promised Bran anything he needed. He gave Bran a Valyrian steel dagger and said he musthave seen things that most men wouldn’t believe. Bran said that chaos is a ladder. Littlefinger apologised for disturbing Lord Stark but Bran said he wasn’t Lord Stark.

Meera Reed (Ellie Kendrick) came to see Bran to say that she wanted to leave to be with her family. He said he didn’t need her any more and she was surprised at his lack of gratitude. Bran simply said thanks so she pointed out everyone else had died for him and that she had also come close. She said Bran had died in the cave of the Three-Eyed Raven.

Outside the walls of Winterfell, Arya Stark (Maisie Williams) arrived. She tried to walk inside but was stopped by two hopeless guards who told her to go away. They wouldn’t believe who she was and one failed to grab her. They decided it wasn’t worth turning her away if she was telling the truth. They told her that Lady Stark was currently in charge and Arya knew straight away that would be Sansa.

They made her sit while they got word to Sansa but Arya disappeared while they bickered. When they told Sansa she knew exactly where Arya would be and headed down to the crypt. She was right and was finally reunited with her sister. Arya asked if she should address her as Lady Stark now and Sansa smiled and said yes. They embraced and Arya told Sansa that the title suited her.

Sansa said Jon’s (Kit Harington) heart would stop when he saw her. Arya complained that the face of her father’s statue was wrong. She asked if Sansa had killed Joffrey but she said she wished that she had. Arya said he was first on her kill list and Sansa laughed not believing she was deadly serious. The both said they had long unpleasant stories to tell.

Sansa told Arya that Bran was also back at Winterfell and took her to see him. He was chilling out in his new wheelchair at the Weirwood tree. Arya gave him a hug and he went full on creepy. He told her he had seen her at the crossroads and felt she would have gone to King’s Landing.

Sansa explained he now had visions and he spoke of Arya’s list to her surprise. He gave Arya the Valyrian steel dagger that Littlefinger had given him. He said it was wasted on a cripple.

In the courtyard of Winterfell, Brienne (Gwendoline Christie) spoke with Podrick (Daniel Portman). With Arya home he said she had done Catelyn proud. Brienne commented that she had done next to nothing.

At Dragonstone, Missandei (Nathalie Emmanuel) spoke with Dany. She wanted to know if there was any word from Grey Worm (Jacob Anderson) and the Unsullied. Dany was curious what had happened between them and Missandei smiled as she told her ‘Many things’.

Jon Snow asked to show Dany something and took her into the caves beneath Dragonstone. He wanted her to see the enormous Dragonglass deposit before they began mining it and said it was all they needed. He also had something else to show her and took her to see some carvings. They were done by the Children of the Forest and he showed her how they had worked together with the first men. They also confirmed what he was saying about the existence of the Army of the Dead.

Jon explained that they needed to do the same and band together to survive. Dany asked if he needed her armies and dragons and he said he thought he did. Dany offered to fight for him after he had bent the knee. He said his people wouldn’t accept southern rule but she said they would if he did.

Back at the entrance to the caves, Tyrion (Peter Dinklage) and Varys (Conleth Hill) were waiting. They had news of the success of taking Casterly Rock but seemed worried. Dany asked if it was good news but was concerned to hear of the defeat of the Tyrell’s at The Reach by the Lannister army. She pointed out her allies were gone and that Cersei now had taken all the food.

Dany was annoyed at Tyrion and suggested he was looking out for his family. She pondered taking her dragons to assault the Red Keep but asked what Jon thought she should do. He said that she had already made the impossible happen and that people would believe she could do it again. He said that if she wanted to appear different she should not use her dragons to melt castles and burn people.

Back at Winterfell, Brienne sparred with Podrick. He tried to best her but as usual failed each time. Arya walked up to them and Brienne complimented her on her sword and dagger. Arya said she wanted to train with Brienne as she had beaten the Hound. Littlefinger and Sansa watched on as the pair sparred. Arya gave as good as she got and came out on top. Brienne asked who taught Arya and she replied ‘No-one’.

Back at Dragonstone, Davos was playing matchmaker and asked Jon what he thought of Dany. Jon said he felt she had a good heart and Davos said he noticed him staring at her. Jon said there was no time for that and asked about how many men they had. They then spoke to Missandei who asked about Jon’s parents. She told them how much she believed in Dany and why.

A Greyjoy ship arrived and a small boat made it to the beach. It was Theon (Alfie Allen) and a few of his remaining men. Jon was waiting for him on the beach for an awkward reunion. He explained that the only reason he didn’t kill him on sight was for the help he gave Sansa. Theon had returned to ask Dany to help save Yara (Gemma Whelan) but they said Dany was gone.

Back with Jaime Lannister, he got a report that the gold had made it back to King’s Landing. He and Bronn spoke with Dickon Tarly (Tom Hopper) about the battle to take Highgarden. Dickon explained how he had known the Tyrell’s. Suddenly they noticed a rumbling in the distance and scrambled to get the soldiers ready to face what was coming.

It was the massive Dothraki army charging on horseback which severely outnumbered the Lannister army. Bronn told Jaime to go back to King’s Landing but he refused. They then noticed Drogon flying above the Dothraki with Dany riding on his back. The Lannister men were helpless as Dany commanded Drogon to unleash his fiery breath. His first assault melted a path through the Lannisters, reducing those in the way to ash.

A huge fight broke out but the Dothraki cut the Lannister’s to ribbons. Meanwhile, Dany flew about on Drogon and completely decimated them. Jaime looked completely horrified and could do nothing but watch. He tried to get his archers to take down Drogon but the arrows bounced off his thick scales.

Jaime remembered they had the Scorpion weapon built by Qyburn and ordered Bronn to use it. Bronn had to fight his way across the battlefield and took out several Dothraki as he went. One tried to hunt him down but Bronn got to the Scorpion and used it to kill his pursuer. Tyrion watched the chaos from afar and couldn’t believe what he was watching.

As Dany came in for another attack, Bronn got Drogon in his sights and fired a giant spear. It missed Drogon and left Dany more determined, she moved him around and headed for the Scorpion. Bronn managed to get off another shot and this time hit his target. The giant spear pierced Drogon and he began plummeting to the ground. He managed to recover enough to take out the Scorpion and Bronn was able to get out of the way just in time.

Drogon landed and Dany tried to remove the spear. Jaime saw an opportunity, grabbed a pike and raced toward her. From a distance Tyrion branded his brother an idiot. Dany looked helpless but Drogon saw the danger. He unleashed another fiery breath but Bronn managed to knock Jamie into the water before he was incinerated. The episode ended with a shot of Jaime sinking. We’re hoping he’ll survive to fight another day.

Watch the official preview trailer from HBO for Game of Thrones 7×04 The Spoils of War below:

Read our 10 burning questions after watching episode four and our preview of episode five Eastwatch.

Let us know your thoughts on The Spoils of War in the comments below as well as your hopes for the season.

Game of Thrones season 7 continues at 9pm Mondays on Sky Atlantic in the UK.