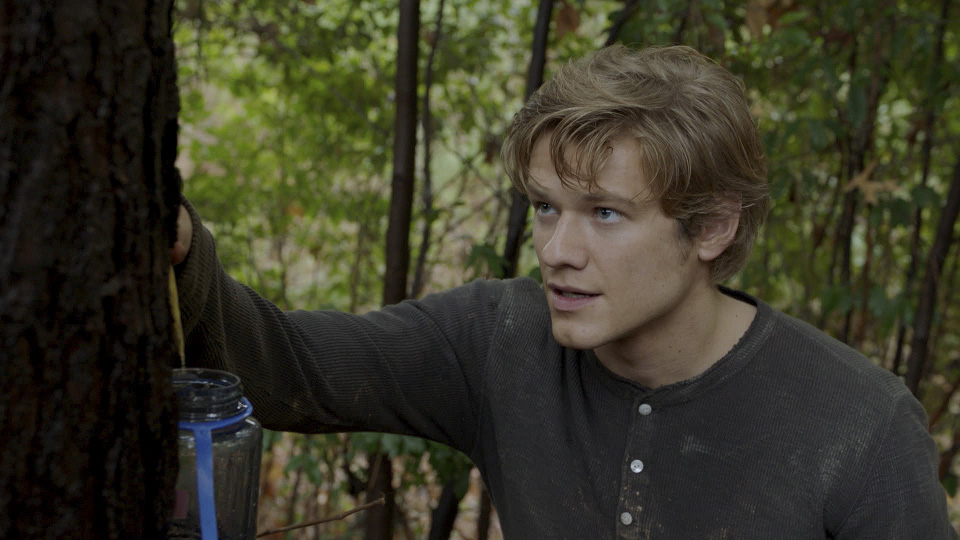 On the latest episode of MacGyver, the team had to find a government mole who was leaking classified intel.

The episode opened up with Jack (George Eads) been tortured in an unspecified dangerous part of the world. He had been injected with truth serum and was being interrogated about who he worked for.

Despite the drugs, Jack still had his sense of humour and slowly gave up the information between jokes. He saved details about Mac (Lucas Till) until last and told his captor that he would be outside the door to the room they were in.

The man looked suspicious and a little worried and walked over to the door. As he stood by it a couple of notes were passed underneath asking for Jack to be released. The man looked at Jack then fired shots through the door. He looked pleased as he heard a thud and a groan and then what appeared to be blood seeped under the door. He opened it up and Mac was there to smack him in the face and rescue Jack.

Back at Phoenix HQ, Sarah Adler (Amy Acker) arrived with intel on Nikki (Tracy Spiridakos). She offered then a chance to come with her to help apprehend her. The intel suggested Nikki would be at a dead drop in a church so they went to ambush her.

They lay in wait while Riley (Tristin Mays) fed them satellite information. Nikki arrived as expected and was caught after a brief chase. She spoke a code word that Sarah realised meant that Nikki might be an deep cover CIA operative and not the traitor they thought.

Nikki explained that her mission was to identify a mole in the government. She didn’t know who they were other than a codename of Chrysalis. It was hard for the team to know if she was telling the truth. Nikki said that the key she gave Mac opened a box containing all her evidence.

She took them to a cabin where there was a lockbox and Mac used the key to open it. Inside they found nothing at all and thought that Nikki had played them. She said that the contents must have been stolen. Suddenly an armed team opened fire on the cabin.

With the team low on ammo, Mac got to work doing what he does best. He used his knife to dismantle a wood burner and then filled it with a bunch of cleaning chemicals. He rolled it outside and had Jack and Sarah shoot through the grill to cause and explosion. It was enough of a distraction to let them escape but Nikki was grazed with a bullet.

Meanwhile, Bozer (Justin Hires) came up with the idea to speak with the assassin Murdoc (David Dastmalchian). Riley went with him. Murdoc said he’d give some information in return for a first edition of a hard to find book.

They later returned with the requested book and Murdoc gave them an international bank account number. This led them to discover some important information proving that there was indeed a mole.

Mac had Nikki try and trick the mole into thinking she had a copy of the evidence and that she would sell it for $2 million. They set a location for the meet but Thornton (Sandrine Holt) turned up to shut the operation down. She explained they had intercepted communications from Nikki proving that she was playing them.

After Bozer and Riley gave Mac and Jack their evidence, Mac realised who the mole was. They went to see Thornton who told them Oversight was coming to take Nikki away. Mac explained that they were actually coming for Thornton because she was the mole!

Mac and Nikki look to have made up but Nikki had to go back undercover to complete her mission.

At the end of the episode, Mac and Jack attended Sarah’s wedding. Jack was tearful as he still had feelings for her. Mac suggested they go home, eat pizza and watch Die Hard.

The next episode is Large Blade, the official synopsis for the episode reads:

Mac and Jack get caught in a crisis when their helicopter crashes in remote Kazakhstan, giving their war criminal passenger the chance to flee.