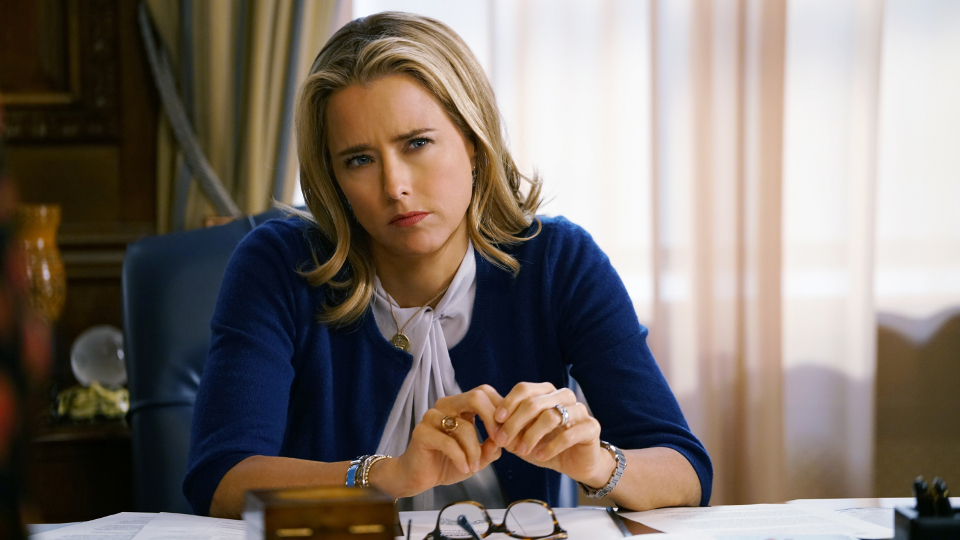 On the latest episode of Madam Secretary, Elizabeth (Téa Leoni) tried to prevent a war between Iran and Israel.

The episode began where last week’s ended with Russell Jackson (Željko Ivanek) collapsing in front of Stevie (Wallis Currie-Wood). She was quick to call for help and begin chest compressions until the medical aid arrived.

The medics found Stevie’s actions had probably saved his life and they found Russell had a weak pulse. President Dalton (Keith Carradine) and Elizabeth walked in as they were preparing to move him. As he was taken away they were called to an emergency meeting in the oval office. Iran had launched missiles at an Israeli nuclear site.

While dealing with that crisis they were also informed that the House would be voting in just a week’s time. The campaign manager wanted to challenge the ruling to stop a possible Sam Evans win but Dalton said they should leave it.

Elizabeth met with the Israeli Ambassador to urge them not to retaliate against Iran. Her effort was too late as the Ambassador told her that she would soon be informed that Israel had destroyed an Iranian air base. He was correct and a few hundred people had been killed.

Somehow Elizabeth and Dalton found the time to visit the hospital to check on Russell. He was in emergency bypass surgery due to suffering a heart attack. Stevie and Henry (Tim Daly) were also there and they met Russell’s wife Carol. She thanked Stevie for her quick actions.

In the early hours of the morning, Elizabeth was summoned to the White House. Iran had managed to infiltrate Israel and kidnap a Minister. Elizabeth and Dalton spoke via video call with Iran but they refused to release the Minister. They wanted to hold him hostage and promised to kill him should Israel not back down. Dalton decided it was time to send in his troops to locate the Minister.

Obviously Elizabeth didn’t have enough going on so Henry’s brother Shane and family came to stay for the holidays. They brought their daughter Sarah who had decided to drop out of college and enroll in the military. Shane wanted him to talk with her to try and change her mind. Henry agreed he would have a conversation but that he wouldn’t talk her out of it.

Henry took Sarah on a jog and when they stopped for a rest they had a talk. She revealed, against her Dad’s wishes, that he had been fired for being drunk at his job. It was shocking news to Henry who had no idea.

Back at the hospital, Stevie was sat reading to Russell. He woke up and immediately wanted updates on what was happening. She told him a bit about Israel and Iran as well as the vote moving forward. Despite his condition he demanded to see the President.

Dalton got word that Israeli fighter jets would be attacking Iran in the next 17 minutes. With so little time he ordered a cyber attack to confuse their GPS. It could be deemed an act of war but it worked and bought them a little more time.

Instead of worrying about the consequences Dalton pushed on with the mission to locate the Minister. They found him being held in Iran and waited for orders. Dalton was reluctant to attack as lives could be lost. Instead he gave the Iranians a 5 minute warning to release him and they decided to comply.

Back home, Henry filled in Elizabeth on the situation with Shane. She tried to give him some advice. Henry later tackled his brother and suggested he see a therapist for depression.

Elizabeth was awoken again in the night by Dalton. New intel suggested that Israel were preparing a new attack on Iran. She decided to pay her old friend Juliette a visit in prison. Juliette said there would never be peace and that only sanctions worked against Iran.

After a meeting with Russell in hospital, Elizabeth and Dalton managed to sit down with Iran and Israel. The outcome was a cease-fire agreement. This would help greatly with the electoral house vote.

Russell wanted to watch the vote on TV but his wife refused. After Dalton called him to tell him the good news that he had won. Russell was overcome with emotion and congratulated Dalton.

At the end of the episode the McCords took part in a charity race. There Elizabeth had a run in with Sam Evans who threatened that he wasn’t giving up yet. He accused her and Dalton of breaking laws during the campaigning.

The next episode is Gift Horse. Elizabeth receives an unusual gift from the Mongolian government, but unwittingly stirs up controversy when she tries to return it.