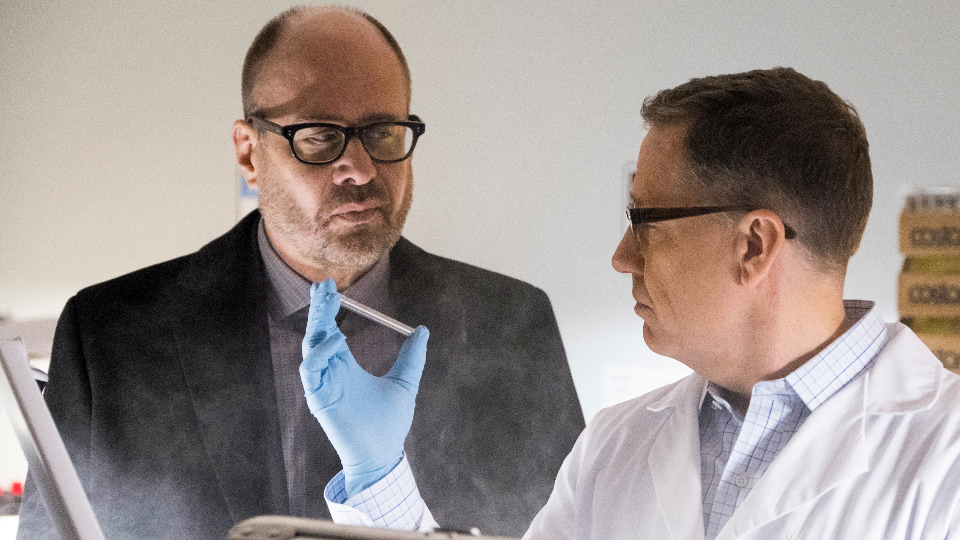 On the latest episode of Billions, Axe (Damien Lewis) found out that lying to his wife Lara (Malin Akerman) was a bad idea.

The episode began with Axe waking up alone in bed the night after his birthday. He immediately realised he was alone and that Lara wasn’t beside him. Next to the bed was a note that simply read “You lied to me”.

It appears Axe is always honest with Lara so he immediately knew that she was referring to the recent rehiring of Wendy (Maggie Siff). He lied to Lara that not having sessions with Wendy was his idea. However, at the party, Wendy purposely explained that it was her own idea and the condition of her returning.

Walking home from the gym, Wendy found herself confronted by Hall (Terry Kinney). He was rather intimidating and ordered her into a waiting car. Inside Wendy found herself sat with a very upset Axe who went mental at her for telling the truth to Lara.

In the middle of Axe’s bad day, Lawrence Boyd (Eric Bogosian) called to request a visit from Axe. He promised it would be worthwhile and he also requested a 20-year-old bottle of whiskey. Axe said he’d find the time to get to him that day. He did so later and found out about the Ice Juice deal and Boyd knew it would be hard for Axe to resist causing problems for Chuck and his Dad.

Hall had been off to try and trace Lara. He gave Axe an update showing him footage of Lara taking $40,000 in cash from their vault. She had also packed some bags and taken their boys with her. So far Hall hadn’t been able to work out where she had gone. Axe begun to get more and more agitated and began leaving voicemail for Lara. These started out nice and got progressively more aggressive.

Meanwhile, Chuck (Paul Giamatti) was undergoing a vetting process for his campaign. His father brought in a woman called Ms. Minchak (Mary-Louise Parker) whose job was to find out every bit of detail about Chuck’s past. The idea is that if they know about everything then the campaign can make sure no one can use the information to hurt him.

On the whole it seems that Chuck has little to worry about and answered “no” to the majority of her questions. She was a little concerned about his situation with Wendy and her ties to Axe Capital. The only thing that appeared to concern Chuck was an incident of bullying that he was involved in at boarding school.

Axe eventually learnt that Lara was staying in the city. However, he was warned against going to visit her. Back at Axe Capital, Wendy asked how the search was going and he told her. Wendy then paid a visit to Lara to explain herself. It seemed to help Lara calm down a bit about the whole situation.

Wendy then went to her next therapy session with Chuck. They were both not in the mood for it so decided to skip it. Instead they had a meal together at a restaurant with a favourite chef. They had a lovely evening together and opened up about a range of topics, including Chuck’s campaign.

Elsewhere in the episode, Bryan (Toby Leonard Moore) targeted Taylor (Asia Kate Dillon) to try and get dirt on Axe Capital. His first attempt was unsuccessful as he collared them while buying coffee. He did manage to pass over his business card.

Later, Taylor decided to meet with Bryan to find out more. They quickly realised that Bryan had no leverage and cut the meeting short.

Taylor also found themselves getting a huge promotion after helping Maffee (Dan Soder) out. All analysts now report to Taylor and there was a $500,000 bonus thrown in. This helped them make the decision to rent a new swanky apartment at a mere $26,000 a month!

At the end of the episode, Lara came home to Axe with the boys. She’s still frosty with him and explains she didn’t even turn her phone on so hasn’t heard his messages. After she went upstairs Axe accessed her phone to delete all the voicemails he sent, worried they would cause more problems.

Watch the Billions 2×11 trailer below:

The official synopsis for Billions 2×11 reads:

Chuck finds he has much at stake in Ice Juice; Axe takes out a huge short.