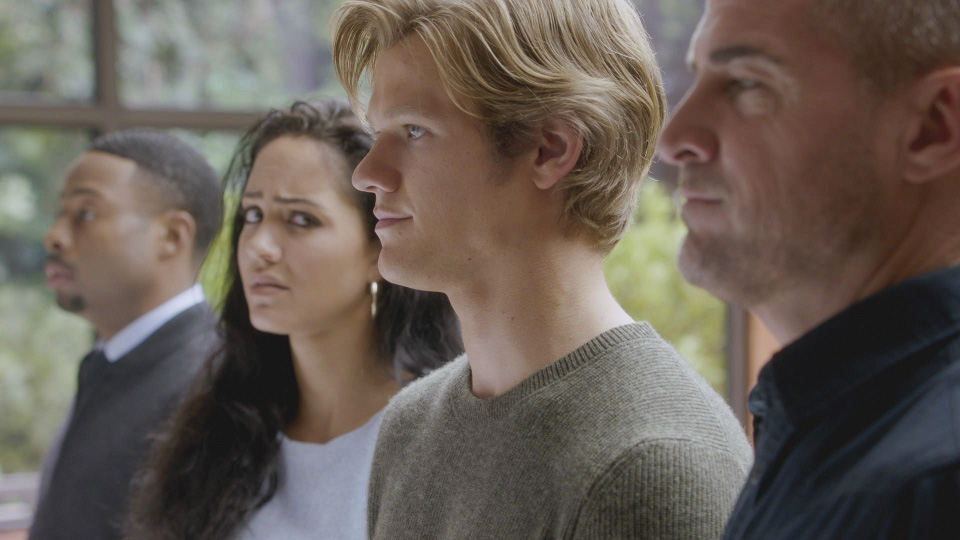 On the latest episode of MacGyver, Riley (Tristin Mays) went rogue forcing the team to track her down.

The episode opened up with Bozer (Justin Hires) chatting to Riley while he was cooking ready for Christmas. She explained that Christmas stopped meaning much to her after her father walked out and she got arrested. Bozer left her to stir a sauce while he went out to use Mac’s (Lucas Till) grill. He returned when the smoke alarm went off to find Riley had left.

Mac and Jack (George Eads) turned up and Bozer explained what happened. They had agents check her place and discovered an encrypted text message on her phone from a blocked number.

Thornton (Sandrine Holt) called to say the NSA had been ordered to carryout a cyber attack on China. In response China were sending nuclear subs to the West Coast. Before the order came in the NSA had been hacked and a cyber-weapon had been stolen.

Thornton had Riley painted as a suspect and suggested that she was behind the hack. Jack refused to believe that Riley would be involved. They are tasked with finding Riley before World War III broke out.

Bozer insisted on joining them but was refused. However he had an idea to track down Riley as he knew how to find the only guy that Riley trusted to build her computers. They reluctantly took him along to help. At the computer guy’s house he wasn’t too helpful until Mac started frying his equipment. Finally he gave up that Riley requested he build a tracking device into her new laptop. He activated it and found out she was in Vancouver.

The team followed her signal to Vancouver and waited for a new ping to come through. While waiting Jack explained how he knew Riley since she was 12 years old as he once dated her mother. Her father had been a drunk and one time Jack had given him a beating. Jack left her mother when he didn’t think he was good enough for them.

Suddenly they spotted a blue van arrive and men got out. Riley appeared and handed them a laptop. As they drove off they threw Riley’s mother Diane (Michel Michele) out. There was some kind of device strangling her so Mac quickly made a lever from a nearby sign. It allowed him to cut her free with his swiss army knife.

Riley explained how she had to hack the NSA to save her mother. The group behind it all was called the Collective. They had her hack a special cyber-weapon called Cannibal that could remotely control cars. She was worried they might modify the source code to allow them to control other systems. During the job she had managed to hack one of their servers and found out that something big was happening at a building in Shanghai in 16 hours.

Thornton ordered Bozer to return with Riley and Diane to the Phoenix Foundation. Riley refused to go and stayed with Mac and Jack. Before they left, Jack told Diane the truth about his work and how they recruited Riley.

The team arrived in Shanghai and went straight to the building with just an hour to spare. The building was incredibly secure so Riley hacked an ATM outside to access its camera feed. She found footage that confirmed that Cannibal was already inside the building so they needed to get in fast.

Mac, as usual, had a plan and ran around the back. There he modified a section of pipe and an air conditioning fan to make a simple air siren. On the way back he picked up a tourist cap for Jack. They then attempted to enter the building but were soon stopped by security.

Moments later the air siren went off so security had no choice but to lock the building down. The team were moved inside to a secure room. Once inside Riley caused a diversion by repeatedly slapping Jack so that Mac could steal a security pass. He realised that the building they were in housed Chinese Central Command. He also wondered if the goal of the Collective was to use Cannibal to hack the Chinese subs to attack America.

Security left them locked in the room but Mac could open it with the pass he stole. They got in an lift and Mac pressed all the buttons to see which floors were restricted. Floor 30 didn’t light up so Mac needed to find a way to get access.

They made for a tech office and left Jack on lookout. Inside the office Mac cobbled together a simple RFID booster and then they went back to the lift. Riley tricked an employee who didn’t speak much English to go with her. She succeeded in getting him close enough to the lift for Mac’s booster to work.

On floor 30 a security guard was waiting with a gun. He wasn’t ready for Jack though who quickly knocked him out. Riley got to work and managed to deactivate all but one of the nuclear sub missiles. Before she could get the last one it launched towards America.

Mac proposed that they move the planet. Using a variety of materials which included wire mesh, a wi-fi router, a table leg and a power supply, Mac knocked up a satellite dish. He had Riley hack the GPS satellite controlling the missile and planned to use his dish to trick it into going off course.

There was only 60 seconds before the U.S. would retaliate and Mac needed to link up the power source. Jack, without thinking, made the circuit using his hand. It electrocuted him but worked and the missile detonated in the atmosphere. The Chinese security burst in moments later to arrest them.

Later the team arrived back in LA and Bozer had postponed Christmas. Thornton took the laptop they returned and explained that the Collective had been arrested. Diane thanked Jack for saving Riley and pondered if their relationship could still work.

At the end of the episode, Riley gave Bozer the final three digits of her mobile phone number. He was delighted and went off to get his to text her immediately. Riley and Jack made up and Mac activated a gadget he’d knocked up to make it snow.

The next episode is Screwdriver, the official synopsis for the episode reads:

Using a screwdriver and bug spray, MacGyver must find the U.S. government mole who is leaking classified intel to the organization that is trying to take down The Phoenix Foundation. Also, Sarah (Amy Acker) returns to help with the mission, and Nikki (Tracy Spiridakos) reappears, but Mac can’t tell which side she’s on.