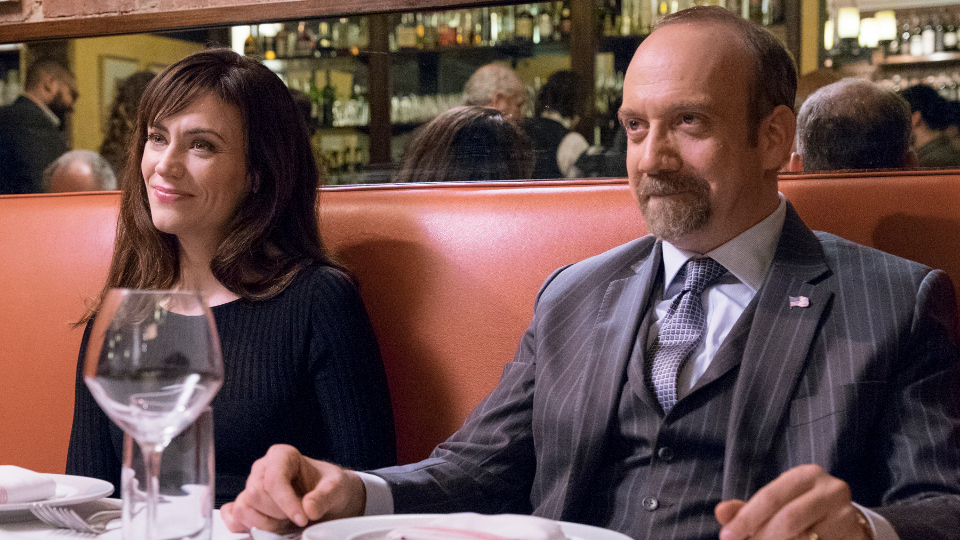 The episode began with Axe and Wags (David Constabile) taking a VR tour of The Ark, a luxury doomsday bunker. Wags had paid $360,000 to reserve Axe a spot for his birthday. He gave him a coin which would give him access. On the coin were the words ‘Sic Transit Imperium’ (which are the title of the episode) which Wags said mean ‘So passes the empire’. At the end of the episode Axe returned the gift saying he would never accept it.

Dollar Bill (Kelly AuCoin) had a different present for Axe. He had info on a car company called Klaxon who were about to issue a recall. He was convinced it would make Axe Capital a fortune but Axe wanted to be more cautious. Bill was upset and felt that Axe didn’t take risk anymore. Axe later found out that Bill got the info from ex-employee Victor (Louis Cancelmi).

Meanwhile, Chuck (Paul Giamatti) and Bryan (Toby Leonard Moore) were holding a meeting. They were trying to intervene in what Axe was doing to Sandicot. They also wanted to find out how Axe got the information on the original casino deal.

Chuck later attended a meeting in Sandicot about what Axe was doing to the town. He promised to bring the law and agreed with a member of the crowd to lock Axe up if he could.

After the meeting he was pulled into another with ‘Black’ Jack Foley (David Strathairn). He seems to think he can tell Chuck what to do after helping him get to the position he is now in.

Back at Axe Capital, Axe sents Deb (Ilfenesh Hadera) to meet with Wendy (Maggie Siff) to see what she had to say about Sandicot. She reported back to Axe after the meeting and he realised that Wendy had seen right through his plan.

Ira (Ben Shenkman) came to see Chuck to ask his help in investing in a company called Ice Juice. He wanted Chuck to tell his father Chuck Sr. (Jeffrey DeMunn) about their IPO but he refused. He didn’t get involved in his father’s dealings and it could also be classed as insider trading.

Sacher (Condola Rashad) interviewed Steph (Shaunette Renée Wilson) to see what dirt she had on Axe. She didn’t actually have much of anything but did know that Victor had approached Dollar Bill with some kind of deal.

When Chuck later read Sacher’s report he spotted something about Axe taking the time to buy up some books of an enemy. He questioned her about it and was furious to discover that they were his Winston Churchill books. It changed his mind about talking to his father about the Ice Juice IPO. When he did his father thought it was a great opportunity but had to dip into a blind trust fund of Chuck’s.

As Axe’s birthday party approached he suggested to Lara that they cancel it. However she pushed to keep it and told him he deserved the celebration. Lara later tried to contact Wendy after she turned down her invitation. Instead she spoke to Chuck and asked him to pass a message that they really hoped Wendy would change her mind. Chuck was delighted that Wendy had said no but in the end he convinced her to go.

The party got underway and Wags made brilliant speech to his best friend Axe who didn’t turn up. At the party Lara thanked Wendy for coming. Wendy revealed that the no meetings rule with Axe was her condition for coming back. This upset Lara as Axe had told her it was his idea.

In the end Axe didn’t go to the party at all. Instead he pulled up at the gate and called Lara to come to him. When she did he drove them to Yonkers Raceway and she looked very unhappy.

Watch the Billions 2×10 trailer below:

The official synopsis for Billions 2×10 reads:

Axe deals with a family disturbance; Chuck gets vetted for advancement.