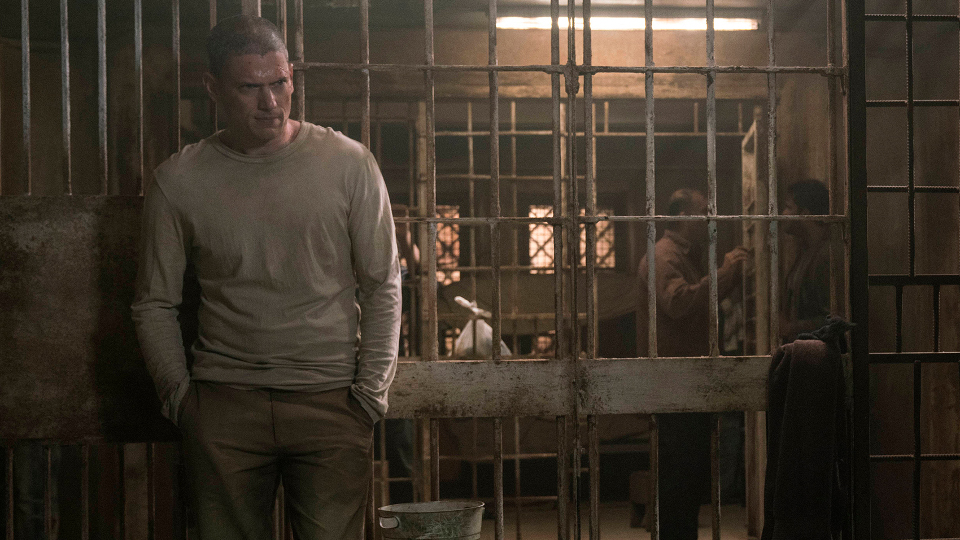 On the latest episode of Prison Break, Michael Schofield (Wentworth Miller) attempted an escape from Ogygia.

If you want to avoid spoilers for Prison Break season 5, we suggest you stop reading now. If you don’t mind then please keep reading for a recap of episode 2 and a preview of episode 3.

The episode began with a news report. It revealed that an ISIS leader known as Abu Ramal was a prisoner at Ogygia. In the prison, Michael shared a crowded cell with several other prisoners.

After a guard patrol one of Michael’s cellmates gave a signal and he sprang into action. Using the top bunk he was able to gain access into the roof with his cellmate Whip (Augustus Prew). They made their way out onto the roof and awaited a signal. They were expecting the prison floodlights to go out but it didn’t happen so that had to return to their cell.

Meanwhile, C-Note (Rockmond Dunbar) was explaining to Lincoln (Dominic Purcell) what information he had found out about Kaniel Outis. He was thrown into Ogygia for crimes against the government and put into solitary confinement for trying to escape.

Linc spotted someone outside the door and gave chase. It was a young boy but he managed to flee. When Linc returned, C-Note found one of Michael’s signature origami birds under the mat. They opened it up and a message read ‘Find the Sheik of Light and I will be free’.

They realised the message was written in code and decided to ask Sheba for help. At first she didn’t want to help because Kaniel Outis was a known terrorist but Linc was able to bribe her with cash.

On the origami bird, Sheba spotted something that looked like Braille. She decoded it and found it to be a phone number. When she called it was a voicemail for Mohammed El-Tunis, a director of electrical works. They realised that he was the Sheik that Michael was referring to.

Check out the Prison Break 5×02 trailer below:

They tried to find him but he was trapped in ISIS controlled suburbs with his daughter. Sheba reluctantly helped get them past a government checkpoint. They were able to bribe a guard with Linc’s money to get past.

In the suburbs they were stopped again by an ISIS checkpoint. She knew one of the men who was now working for ISIS. They wouldn’t let them go but a situation suddenly arose and the ISIS men rushed off to deal with it.

They found the building where the Sheik should be but it was surrounded by ISIS. Linc decided to try and get in from the roof and it worked. The Sheik was hiding inside and thought they were ISIS so attacked them with a knife. The ISIS men outside heard the noise and came to investigate. The Sheik explained that his daughter was hiding in the basement of a nearby building.

As ISIS broke into the building they escaped via the roof. Linc managed to steal a gun and vehicle to escape with the girls. He met up with C-Note and Sheba’s vehicle while ISIS gave chase. They just made it back to the government checkpoint who took care of the ISIS vehicles.

Back in safety the Sheik explained his son was in Ogygia for homosexuality. He had met him recently and his son had requested his father create a blackout. It was the signal Michael was waiting for but he was a week late because he was stuck trying to save his daughter.

Back in Ogygia, Michael continued on with his plan. One of his cellmates had smuggled a smartphone into prison. He was struggling with drug withdrawal. Michael was able to make a fire in his cell to heat some water. He then used it to warm some cloth which he applied to his head in order to get to the infirmary.

There he had to take a beating but was able to get morphine pills to trade for his cellmate’s phone and a credit card. He said he needed them to order a pizza.

Elsewhere in the episode, Sara (Sara Wayne Callies) received the video that C-Note shot in the prison of Michael. She couldn’t believe it and was confused to hear him say he wasn’t Michael. After talking to her husband she paid a visit to the State Department.

There she was paired up with a familiar face, Paul Kellerman (Paul Adelstein). She was reluctant to deal with him due to their past but he said he could tell her more about Michael.

He explained to her that the name Kaniel Outis was a wanted terrorist. He pulled up digital documents that showed Kaniel Outis was Michael. He said only a genius could have been capable of changing his identity.

Kellerman later sent Sara a video that showed Michael apparently killing the deputy director of the CIA. He said there was overwhelming evidence to support Michael being the murderer.

Later when Sara when to pick up her son at school she couldn’t find him. When she did he was carrying a paper flower which he said he got from the pizza man. She opened it out and it contained a message ‘Hide everyone, a storm is coming’.

At the end of the episode, the lights dimmed at Ogygia meaning that the escape was on in 24hrs. The solitary inmates were released into the general population. This included Abu Ramal who was revealed to be friendly with Michael.

Check out the Prison Break 5×03 trailer below:

When T-Bag ambushes Sara, he warns her that two of Poseidon’s henchmen, Van Gogh and A&W, may be following her. Meanwhile, Lincoln attempts to retrieve his confiscated passport to escape Yemen, and Michael plans his next move.

UK viewers can watch the next episode of Prison Break season 5 on FOX UK on Mondays at 9pm. US viewers are a week ahead and can tune in to FOX on Tuesdays at 9pm ET.

Advertisement. Scroll to continue reading.
In this article:FOX, Prison Break