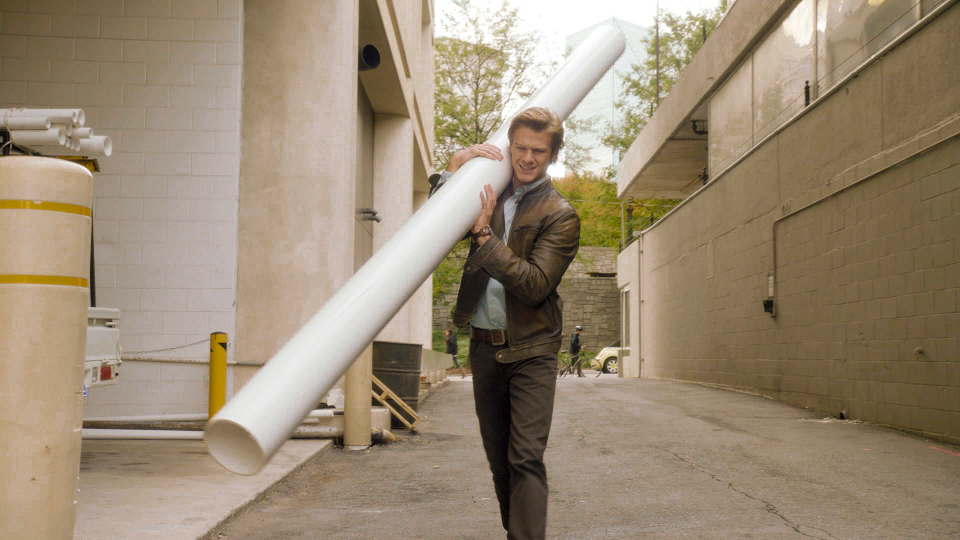 On the latest episode of MacGyver, Mac (Lucas Till) went back to visit his hometown.

The episode opened up with Mac and Jack (George Eads) trying to outrun a police car. Mac made a small explosive and had Jack open the car bonnet. He then used the explosive to knock the bonnet off before pouring a mixture into the engine to give them a speed boost.

The episode then jumped back to eight hours earlier. With Mac, Jack, Bozer (Justin Hires) and Riley (Tristin Mays) in the same car heading for a break. They were off to the hometown of Mac and Bozer.

They went to visit their old school and Mac’s favourite teacher Arthur Ericson (John Heard). Mac was there to give a talk to the science class taught by Ericson.

In class the students looked bored while an awkward Mac began his talk. One female student called Valerie Lawson (Amiah Miller) stood out after asking some science questions related to car engines. It put Mac at ease and he prepared a demonstration mixing chemicals to blow stuff up which excited the students.

Meanwhile, Bozer gave Riley and Jack a tour of the school. Along the way he had plenty of stories from when he and Mac were young.

After class Mac spoke to Ericson who told Mac that Valerie hadn’t been herself recently. Mac went to talk to her and looked at a robotic arm project that she was working on. He began to help her out when suddenly a bunch of guys burst in and knocked Ericson to the floor.

They said they were there for Valerie so Mac put up a fight. Unfortunately they had the advantage and outnumbered him. As Valerie was dragged away Mac was tazered.

Mac and Jack paid a visit to Valerie’s father to tell him the news and talk about his daughter. They noticed that he was a bit of a car buff which was where Valerie got her interest from. Her father requested they leave so he could deal with the situation himself. Jack suggested that the father was probably in on the kidnapping.

Outside Mac grabbed a solar light and hooked it up to the laser from the CD player to create a remote listening device. It let them overhear a conversation between the father and the kidnappers.

Back at the school Bozer tried to show Riley how he and Mac used to break into the school. Unfortunately the tree they used to use had been cut down. Riley picked the lock and once inside she hacked the security system to get a partial plate from the kidnapper’s car. Bozer spoke to an old friend and the trail led back to Valerie’s father.

They tracked the father down and broke his car. They found out that he smuggled drug money for the guys who kidnapped his daughter. Recently he quit so the kidnappers took his daughter to make him resume his illegal work for them. Mac agreed to drive the money for him to get Valerie back.

To try and avoid the police patrols, Mac called Bozer and had him build a crude system to track their positions. It worked well for a while until they came across a police car that wasn’t using the radio. A chase started and this is where the episode began.

After outrunning the police Jack went to the meet while Mac watched from cover. Then men refused to give up Valerie until her father agreed to drive for them permanently. They moved in to take the money but Mac created a loud distraction. It worked and he escaped with Valerie, leaving Jack to fight the men.

Mac took Valerie to an old hidden tree house that he and Bozer built when they were kids. He left Valerie there with an old telescope he made and a whistle to get his attention if needed. Jack arrived with the car and money.

The men arrived on the scene and took the bags of money. What they didn’t know is that Mac had rigged them with the explosive experiment he used earlier at school. As they drove off Mac called Jack’s phone which was in the bag and that set off the reaction.

They all ended up in jail while the police worked out what had gone on. Thornton (Sandrine Holt) arrived next day to sort the mess out.

At the end of the episode, Mac took Valerie back to the treehouse and gave it to her. He made her promise three things, that she would visit the treehouse often to do experiments, be there for her father and to call him if she needed him.

The next episode is Scissors, the official synopsis for the episode reads:

When Riley mysteriously disappears and goes rogue after hacking into the NSA and stealing a dangerous digital weapon, MacGyver, using a PVC pipe and fan, must find her in Shanghai and disarm it before it can be deployed. Also, Bozer goes on his first official mission and Jack opens up about his history with Riley’s mother, Diane (Michel Michele).