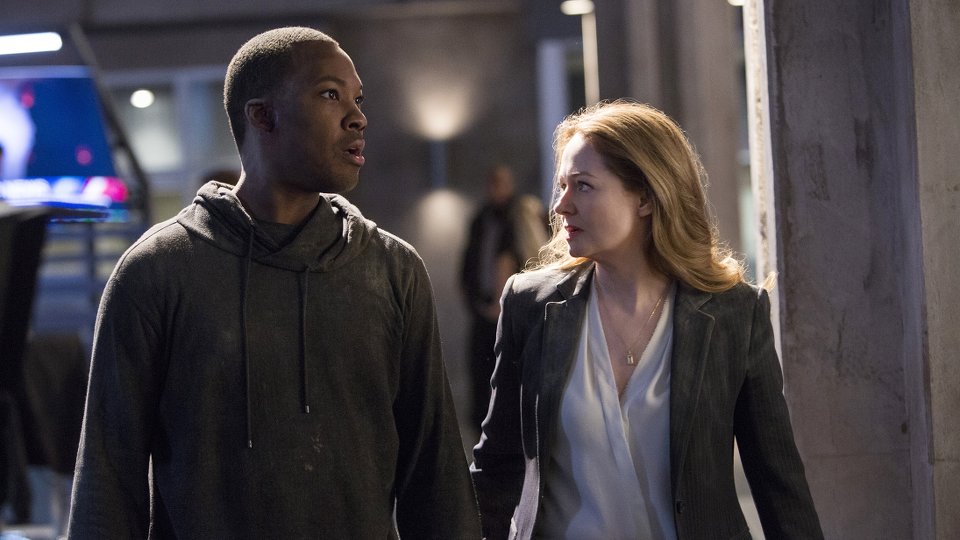 Jadalla (Raphael Acloque) was taken into custody at CTU but he didn’t stay there for long on the latest episode of 24: Legacy.

Naseri (Oded Fehr) kidnapped the girlfriend of CTU’s head of security Stephen Grant (David Maldonado) and strapped explosives to her so that he could negotiate Jadalla’s release. Eric (Corey Hawkins) was sent to Grant’s girlfriend’s house after CTU tracked Naseri’s call but was unaware that the woman he found there was connected to Grant.

As Eric worked to deactivate the explosives, Stephen helped Naseri get access to CTU to collect Jadalla. Rebecca (Miranda Otto) was caught up in Stephen’s actions and tried to warn John (Jimmy Smits) to leave CTU.

Naseri killed Stephen and as he escaped with Jadalla, his men kidnapped John. An explosion left Rebecca and the CTU team dazed but they quickly instructed road blocks to prevent Naseri getting away. That didn’t work and Naseri escaped with Jadalla and John.

Elsewhere in the episode it was revealed that Naseri was a mole for Jadalla’s father than killed an intelligence asset while pretending to be part of Eric’s team. Nicole (Anna Diop) found a letter from Rebecca offering Eric a job as a CTU agent and Andy (Dan Bucatinsky) was reinstated.

Also Henry (Gerald McRaney) returned home and once again admitted his wrongdoings to John telling him he’d covered his tracks to protect the Presidential campaign.

The next episode of the season is 9:00 P.M. – 10:00 P.M. Rebecca’s personal and work life collide when she gets a phone call that forces her to make an important decision.

Tune in to FOX HD at 9pm on Wednesday to see the episode. Preview it with our gallery and the promo below: