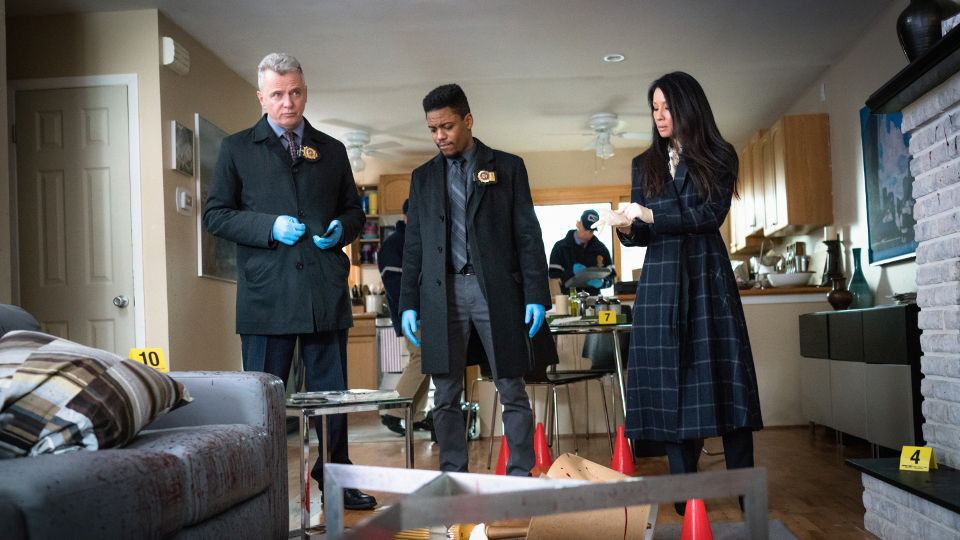 On the latest episode of Elementary, Sherlock (Jonny Lee Miller) and Watson (Lucy Liu) had to questionhow well they knew Shinwell (Nelsan Ellis).

At the start of the episode, Sherlock told Watson the news that Shinwell had murdered Jameel 12 years earlier. Watson didn’t want to believe the news and needed proof to be sure.

Meanwhile, at a self-storage facility, a small group of people were bidding on the contents of an abandoned unit. Two guys in particular seemed keen to win and outbid each other several times. Eventually one of them won and invited the other to take a look at his winnings. They were both impressed by the contents until they opened a large metal cabinet. Inside was the decaying dead body of a man.

The police were called and Detective Bell (Jon Michael Hill) arrived on scene with Sherlock and Watson. Sherlock noted that the man appeared to have been skewered with a sword. Unusually there was no security cameras on site. Sherlock deduced that the deceased was probably a thief. The items in the storage locker were stolen from people who had died.

The team brought in a man who worked with the dead man who was called Travis. He admitted that he knew that Travis had been stealing. He also had an alibi that he was on a cruise with his wife when he last heard from him. Travis had left him a message saying that he had hit the jackpot and then never came back to work. He also gave them the name of the last job they worked on.

Looking through the possessions from that job, Sherlock found an unusual chest. It appeared to be very old and from a boat. After noticing the smell of an old book, Sherlock worked out that the Captain’s Log was missing from the chest.

Watson sat in on the interview with Damon, Jameel’s brother. He explained how he found his brother murdered and that he saw Shinwell walking away from the crime scene. As he left he watched him dispose of something in a nearby trash can. Inside he had found the gun that Shinwell used to kill his brother. He decided to keep it to kill Shinwell. After Shinwell ended up in prison he knew he would have to wait for the chance to kill him.

Sherlock paid a visit to Shinwell to accuse him of the murder of Jameel. He asked for the truth in order to try and help him. Shinwell denied the murder and demanded that Sherlock leave his home.

Back on the case, Sherlock had discovered that the missing Captain’s Log belonged to a pirate called Black Peter. He suspected that Travis had found a treasure map. The clues led them to a bar where they found out that Travis had been looking for help to recover the treasure.

Using satellite images they were able to check the site of the shipwreck and found the yacht anchored there for a week. They pulled the guy in and he admitted to recovering the treasure. He also had Black Peter’s Log Book but said he didn’t know of Travis. Instead he had bought the book online for $25,000 via the Dark Web. He provided the screen name of the seller.

Using the screen name they were able to identify an IP address and track down the location it was used. There they found a man but it wasn’t him. Instead his daughter admitted to selling the log book. In the end they tracked down the man responsible for the murder and it was the man from the bar.

At the end of the episode, Shinwell jumped Sherlock as he walked home. He hit him over the head to knock him to the ground then repeatedly kicked him while he was down. He admitted to killing Jameel but said it was SBK’s fault. He vowed to take them down and said anyone that got in his way would get hurt.

The next episode is High Heat. Holmes and Watson investigate the murder of a man Sherlock considered one of New York’s worst private investigators.

Tune in to Sky Living HD at 9pm on Tuesday to see the episode. Preview the episode with our gallery below: